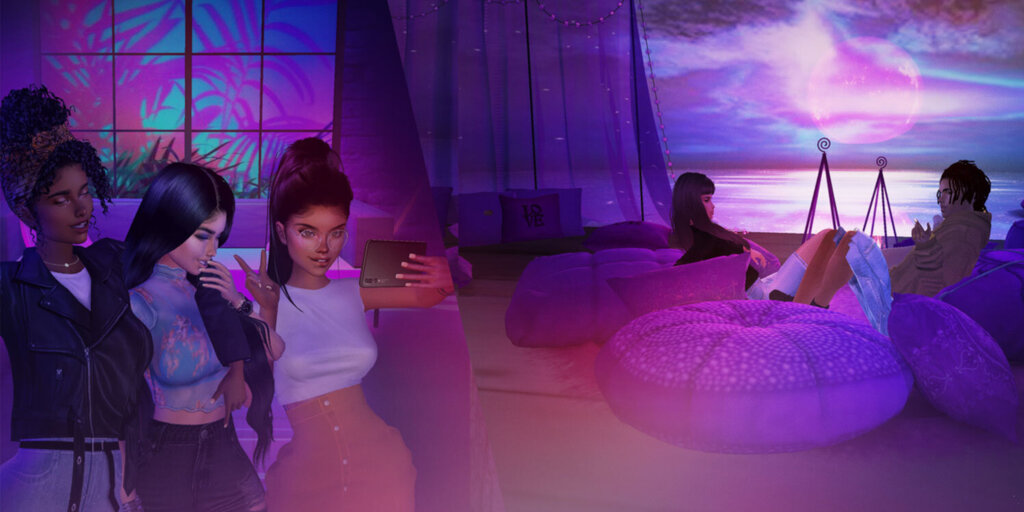 You may remember IMVU (pronounced “imm” + “view”) from the halcyon days of the late-2000s internet, when banners ads for the service felt inescapable. A hybrid between a social networking site and a virtual reality hangout space, IMVU was founded in 2004, and married the instant messaging capabilities of AIM with the escapist allure of 3D avatars; as with Second Life, it’s been putting along quietly ever since. According to press materials, IMVU has users in over 140 countries.

With its new digital currency, VCOIN, the company is looking to reposition virtual money as a legitimate asset—an Ethereum-based token that works like stablecoin, and that IMVU says is backed by real currency. While it’s not uncommon for new video games to use premium currencies as a way of facilitating microtransactions, the money almost always flows from the real world into the game; with the launch of VCOIN, those transactions will start to work both ways.

Though IMVU is free to join, it’s attached to a digital marketplace where users can buy virtual items like clothes and accessories through microtransactions: in-game trades conducted entirely on the platform. Up until now, the coin of the realm has been the IMVU credit, which is analogous to something like Fortnite’s V-Buck—you can either buy it with real money, or slowly earn it by performing in-game tasks.

IMVU’s situation is more unique than Fortnite’s, according to Chief Strategy Officer John Burris, since it’s less of a video game and more of a digital replica of the real world; on IMVU, you can pay for in-game services that are more intangible than a skin for your character, or an accessory from the marketplace.

“There’s people who’ll pop on and say, ‘Look, I’m not a real psychiatrist, but if you want to come and chat with me in my cool lounge about your girlfriend problems, let’s do it,’” Burris told Decrypt. In another hypothetical, he described a situation in which users could pay each other for short-term virtual companionship: “Hey, give me 50 VCOIN, I’ll be your girlfriend for the night.”

This Social Network Just Took Another Step Toward Becoming Uncensorable

These are so-called “gray market” transactions, happening outside of the purview of the platform. VCOIN could help bring these sorts of payments (which have historically been funneled into services like PayPal) onto IMVU. “The more that happens on-platform, where we have some oversight,” said Burris, “we think that’ll be valuable.”

The twist is that VCOIN is actually a ERC-20 token on the Ethereum blockchain, with value outside of IMVU. Thanks to a partnership with Uphold, the digital wallet provider behind the Brave browser’s BAT token, any VCOIN purchased on IMVU can be exchanged for fiat currency. The company also received a no-action letter from the SEC, allowing it to sell VCOIN as a “transferable non-security.” It’s only the third company to receive this type of approval from the SEC for the sale of a crypto token.

A single VCOIN is worth $.004, and the price is fixed, though Burris said it’s “not a traditional stablecoin,” in that it doesn’t have to adhere to regulations that apply to other stablecoins. “You know how, USDC, those guys put away exactly a dollar when you buy a coin? We’re not doing that exactly, we have some flexibility in how we pay out users.”

The natural follow-up here is: if each VCOIN isn’t backed one-to-one with $.004, how do users know for sure that they’ll be able to cash out? And what if every user wanted to cash out at once?

“As we sell VCOIN, we’re setting aside cash to purchase back VCOIN,” explained Burris. “So any user that either is on IMVU’s platform, or that comes in and creates an Uphold account, can convert into cash.” He continued, “Over time we’ll begin to understand what percent of the VCOIN market is being converted into cash, and we’ll know what cash we have available for cash flow, but obviously we’re going to be super conservative and make sure we have plenty of cash to handle that.”

Going forward, Burris explained, IMVU is hoping VCOIN could help attract DJs and virtual performers to the platform—artists who want to get paid for virtual concerts (think: Travis Scott in Fortnite, or 100 Gecs and Charli XCX in Minecraft) without the “friction” of dealing with services like PayPal.

“I’m very confident it will become the currency of choice in and around our platforms,” said Burris. “It’s our job to make it useful, and a good economic tool for others off our platform.”