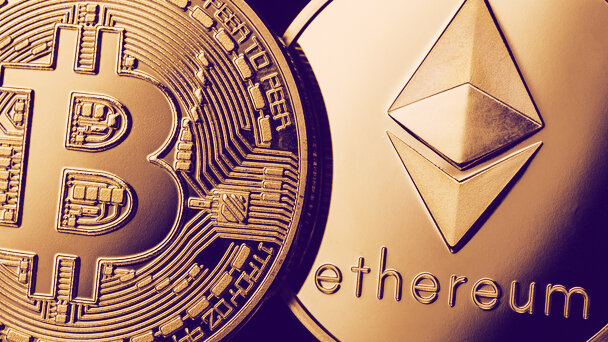 More value was being moved daily across the Bitcoin blockchain than Ethereum for most of their respective histories. But on September 2, 2020, Ethereum overtook Bitcoin for the first time, processing $6.5 billion daily. But in the last few weeks, surging institutional interest and rising prices have put Bitcoin back in the driver’s seat.

“MicroStrategy is one example of an institution that has gobbled up massive amounts of Bitcoin—roughly $2.4 billion based on today’s prices. Institutional adoption of Ethereum is gaining momentum, but not still on the same level as Bitcoin,” Jason Brown, director of business development at composable smart chain platform Komodo, told Decrypt.

This institutional investment can be seen by the amount of withdrawals from crypto exchanges. For example, institutional-focused exchange Coinbase Pro saw an exodus of 55,000 Bitcoin on January 2, likely as a result of large traders moving funds to long-term storage.

Bitcoin is a store of value

Johannes Schmitt, director of banking and payments at cryptocurrency exchange Kraken, explained that Bitcoin is a store-of-value asset and not one many holders generally move regularly.

With mainstream interest rebounding as the recent rally takes BTC to a new all-time high, he said “it’s not surprising” that value settled on Bitcoin has surpassed that on Ethereum.

At the same time, investors that are new to crypto generally buy Bitcoin before moving into other assets.

“This is what we’re seeing. Over time, we should expect value settled on Ethereum to gradually regain ground as investors become more comfortable with the digital asset class, investing in Ether for itself as well as using it to secure the network or in a host of new financial activities, such as DeFi,” Schmitt added.

Additionally, the Ethereum network has seen increased gas prices in recent weeks, making much of the network “unusable” for people who use decentralized exchanges and DeFi protocols built on top of it.

“Currently, fees on Ethereum are 6x that of the Bitcoin network and that’s not even including any stats from protocols built on top of Ethereum that require gas fees paid in ETH,” Brown explained.

US Treasury to Allow Blockchains, Stablecoins for Bank Payments

However, he added that “it seems probable” that Ethereum will regain the lead soon as the top value settlement blockchain due to the recent ruling by the Office of the Comptroller of the Currency (OCC) that allowed US-based banks to issue payments in stablecoins.

“USDC, PAX, DAI, and others are likely to gain momentum as a means of settling bank payments digitally in minutes compared to days with legacy systems,” Brown summarized.

As Decrypt reported, the OCC stated on Monday that banks may use stablecoins and blockchains for payments, potentially giving the mainstream adoption of cryptocurrencies a big boost.