If you follow the usual press reports, the crypto currency BTC is almost always about two topics: either there are noticeable fluctuations in exchange rates or it is the high energy consumption. This guest post is about an energy supply option that practically turns the common criticism on its head.

It is statements like this that get stuck in public: “A BTC transfer costs as much energy as a household of four uses in 6 months”. This statement is just as pointless as the assertion “my car uses 6 liters per 100 km because I turn the indicator every now and then”, because it declares the secondary function to be the main function, which in the BTC network is the security aspect.

As is well known, the extreme IT security of the BTC network can only be guaranteed by using appropriate energy. This level of security would also be desirable for our infrastructure (energy supply, internet, government apparatus). According to a study by Munich Re, the costs of cybercrime now exceed the damage caused by all natural disasters.

The energy demand of the BTC network arises mainly from the globally distributed mining companies (data centers). These halls are equipped with special computers, so-called mining rigs, which in turn are equipped with special ASICs (application-specific ICs). Such computers can only carry out one very specific arithmetic operation at an unimaginable speed: Determine the so-called hash value of a new data block (which contains around 2,000 transfers) for the blockchain database. In principle, this process can be followed live, see Figure 1. 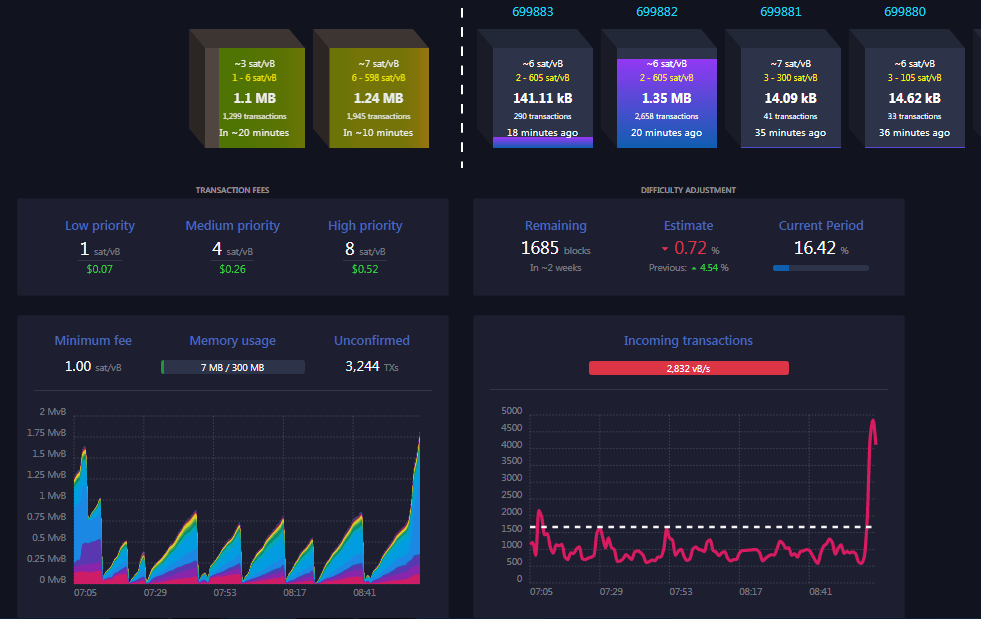 The process is called PoW (Proof of Work). It was founded in 1997 by Dr. Adam Back develops and generates around 90 TWh Energy expenditure per year.

Despite the development of renewable energy sources (solar and wind) and research work such as nuclear fusion technology, it is foreseeable that the rapidly increasing electricity demand of the world population can only be met in a CO₂-neutral medium-term by making massive use of nuclear energy. There are innovative concepts that should be decentralized and environmentally friendly. A possible keyword here: traveling wave reactor. One disadvantage of renewable energies is their “unreliability”, caused by lulls and fluctuating sunlight yields. These possible gaps in supply must be compensated for in other ways. Unfortunately, there is still no one-size-fits-all solution for storing large amounts of electrical energy. An example: EWE presented a German-Japanese research project in the northern German town of Varel. This is a large hybrid storage system that can deliver more than 11.5 MW of power if required. It could supply all of Varel’s households with electricity for around five hours.

All such research efforts are to be welcomed and important, but it does not look like a breakthrough breakthrough at first. And this is where an alternative idea comes into play: Quickly retrievable energy reserves are essential for our grid stability – especially in times of renewable energy sources that are difficult to calculate. How often Germany has missed blackout scenarios is not communicated directly to the citizens, but it cannot be completely concealed. So writes Niklas Zaboji:

From 7:49 p.m., the network operators therefore pulled out more stops and removed four industrial plants from the network with the loads that could be switched off immediately, including the Trimet aluminum smelter in Essen. Eleven minutes later, the dropping of bulk consumers continued across the country. Now, at the behest of the network operator, several of the quickly disconnectable loads (SNL) have also been disconnected from the power supply in order to balance generation and demand. They have a lead time of a few minutes, while the SOL go offline within 250 ms. The drops lasted until 9 p.m.

In order to defuse the described problem, energy reserves are required.

And these could provide the above-mentioned innovative nuclear power plants. But every technician knows the next question: what to do with the energy when it is in the public grid not is needed? Such power plants absolutely need a constant load, otherwise there is no other way. And before you now feed superfluous energy into a lithium-ion system, which otherwise only costs money and does not generate anything and also has only limited capacity, the power plant can better feed a neighboring mining system, even in the longer term. Mining systems work extremely economically around the world, so they make a profit by mining bitcoins. The power plant can therefore always deliver its energy at a profit, even without needing the “public grid”. And it could be optimized even further: The mining rigs convert 100 percent of the energy into heat. This could be used by heat exchangers and used for district heating, for example. Such concepts are already being pursued overseas, only in Germany are there initially again ideological barriers in the way. This problem decouples us from the world market.

The biggest advantage of this system would be as follows: If the public grid suddenly needs a lot more energy from the power plant, the mining rigs can be in In seconds switch off gradually (presumably SOL) without any disadvantages for anyone and without anyone even noticing – and no information is lost either. Our energy supply networks could be operated in an optimally stable manner, despite renewable energies. BTC mining would serve as a tool to stabilize the networks without incurring any costs. Voters and politicians just have to understand and implement these interrelationships, but time is of the essence. So far, such alternatives to the “lithium-ion mega-storage system” have not existed at all, so the new orientation and way of thinking are difficult for us, but it is still worth considering. Demonizing BTC technology could prove to be a big mistake.

Some CO₂ information should not be missing at this point in order to be able to compare the magnitudes. One study Cambridge University, for example, already found in 2020 that 39 percent of renewable energies are used for BTC mining. Germany itself does not achieve a higher share in the use of renewable energies. The balance is likely to improve soon, as mining has barely been allowed in China since 2021 and fossil fuels have predominantly been used there. As of today, BTC is only responsible for around 0.05 percent of global CO₂ emissions, the fashion industry for 5 percent. And then the question arises, which is more important: the latest collection or the world’s first fair value system?

The following figures show the annual CO₂ emissions of various areas in millions of tons.