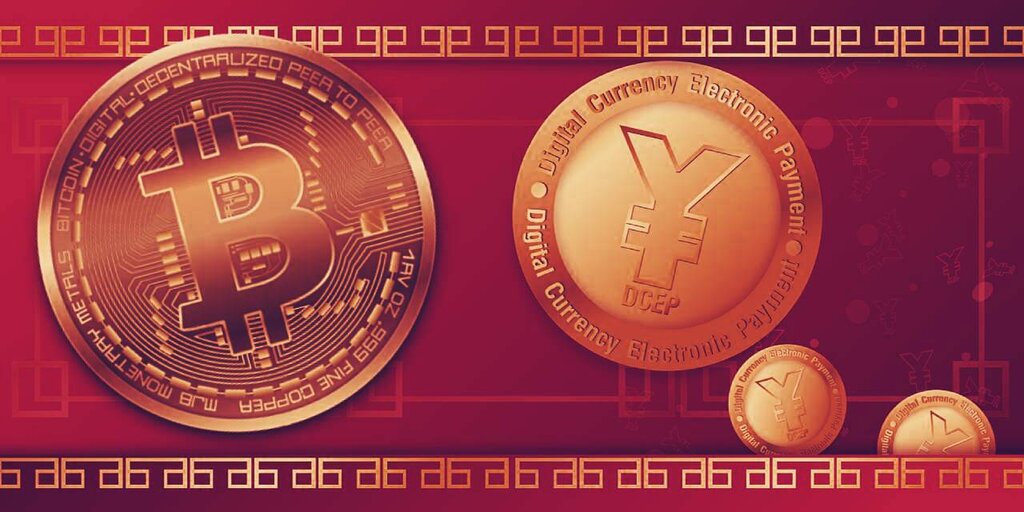 In the past year, China’s government has pressed ahead with plans for its central bank digital currency (CBDC), the Digital Currency Electronic Payment (DCEP) system, also known as the “digital yuan”. It’s launched large-scale tests at major banks, airdropped $1.5 million worth of DCEP to citizens in Shenzhen, and examined more than 6,700 use cases for the digital currency.

It’s been billed as the country’s most ambitious financial technology solution to date, with some suggesting that it could help China dethrone the US Dollar as the world’s reserve currency—a prospect that’s even seen the US Senate sit up and take notice.

DCEP: An inside look at China’s digital currency

If the DCEP achieves widespread adoption, could it threaten to displace Bitcoin as the peer-to-peer cash system that Satoshi Nakatomo dreamed of? It’s unlikely, and to understand why, it’s necessary to drill down into the fundamentals behind the two currencies.

Both Bitcoin and DCEP are a form of digital currency, but they are issued by completely different entities, with wildly divergent philosophies. Bitcoin was launched by a single anonymous founder, Satoshi Nakamoto, and is designed to facilitate borderless transactions, independent of any centralized entities.

The DCEP has been created by China’s central bank, the People’s Bank of China (PBoC). It is designed to digitalize cash circulation in the country, ultimately removing all trace of paper money and affording the government full control over the whereabouts of every cent.

The DCEP doesn’t actually use blockchain as part of its underlying technology. It uses a “Binary Operating System” where PBoC serves as the only issuance database of DCEP, while digital wallet operators provide circulation services

“DCEP is issued based on the commercial bank’s reserve at China’s Central bank. The ratio is 1:1. It has inherent value and backed by sovereign entity,” Chuanwei Zou, a renowned economist and Chief Economist of PlatOn, a China-based public blockchain protocol, told Decrypt. “That is fundamentally different from Bitcoin, which is issued based on an algorithm. It has no inherent value, nor any credit guarantee.”

Bitcoin and DCEP’s different use cases

Because the DCEP is backed by the Chinese government, its circulation is carefully controlled based on the government’s preferred use cases. In a recent experiment, Chinese government airdropped a total of 10 million RMB to 50,000 citizens for a duration of 10 days. Each citizen received 200 RMB and could spend it at selected merchants.

Bitcoin, on the other hand, is not governed by a centralized entity, but by a consensus mechanism; its functionality changes based on community consensus. From the early days when Bitcoin was the default payment currency on Silk Road, to its more recent narrative as a store of value, Bitcoin cannot be simply airdropped to millions of users, nor can it be defined by one party.

DCEP is not truly borderless

“DCEP might have some success in China in terms of replacing the yuan, but its road abroad will be difficult.” Victor Ji, research assistant at Harvard Kennedy School’s Belfer Center.

Contrary to predictions that DCEP will be China’s trojan horse to facilitate cross-border payments, Ji believes that the actual DCEP circulation will be more complicated, from a monetary policy perspective.

What China’s citizens really think of its digital currency

“It is true that the emergence of DCEP can increase the efficiency of China’s cross-border settlements, because it allows China to surpass all existing financial systems. But the potential impact could also be huge. If offshore RMB is increased, it automatically impacts China’s currency stability, as China’s foreign reserve also changes.” Ji explained.

Indeed, compared to Bitcoin, which has a fixed amount produced on a transparent chain of blocks, DCEP’s issuance, distribution, and value is dynamic. Like any monetary policy, the Chinese government has to choose how much DCEP to be issued abroad so that it does not impact the current capital control.

Many have argued that DCEP can be an onramp channel for Bitcoin. After all, once money is digitalized, wouldn’t it be easy to move from one wallet to another? That’s how many fiat currencies flow to the crypto market, through the creation of stablecoins such as USDT and USDC.

Given that Bitcoin’s ethos is almost diametrically opposed to that of the DCEP, it raises the question of whether China might try to clamp down on Bitcoin in order to drive uptake of its own digital currency. Although Bitcoin is legal in the country, the Chinese government has historically taken a negative stance on the cryptocurrency, promoting a “blockchain not Bitcoin” narrative and, in 2017, imposing a ban on all websites relating to cryptocurrency trading.

Fortunately for Bitcoin advocates, actually banning the cryptocurrency entirely would pose significant challenges, as well as incentivizing people to obtain it. And it would likely be counterproductive, given that Chinese Bitcoin miners already dominate the Bitcoin network hash rate; banning Bitcoin would remove one of China’s levers of control over the cryptocurrency.

Can a country actually ban Bitcoin?

Taking a step back, the DCEP could not have been created without Bitcoin; Satoshi’s original vision has inspired many institutions to pursue digital currencies in one form or another. After many years of observing private institutions launching tokens, the Chinese government has become one of the pioneers of central bank digital currencies. However, its centralized digital yuan is a very different beast to Bitcoin, and the two will likely coexist rather than competing with each other directly.