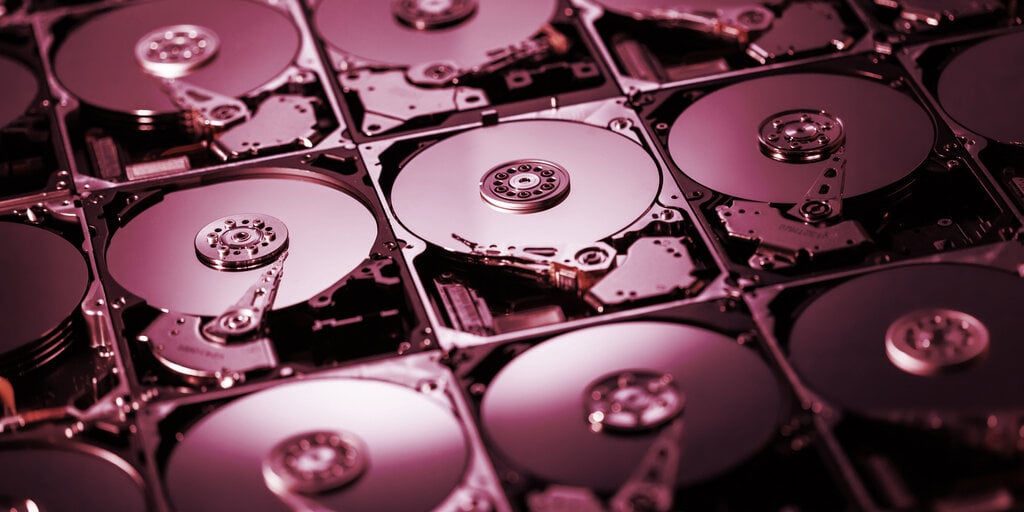 Proof of space cryptocurrency Chia caused a run on hard drives in Southeast Asia ahead of its launch. Now sales of hard drives are soaring in Europe, according to a report by research firm Context—and Chia is the main culprit.

“For sure it is Chia,” Gurvan Meyer, an analyst at Context, told IT publication The Register. According to Context’s report on the European computer storage market, sales of enterprise-grade storage drives over 10TB grew to 200,000 in April 2021, increasing 240% compared with the same period the previous year. Sales of NAS consumer-grade HDDs rose to 250,000, a year-on-year increase of 167%.

And sales of surveillance disk drives rose by 116% year-on-year to 200,000 units, although “there has been no specific event in surveillance to cause that growth,” Meyer told The Register.

Although economies opening up and cloud providers improving their infrastructure has played a role, Meyer attributed the lion’s share of the hard drive boom to Chia. “It has taken everybody by surprise following the launch of Chia,” Meyer added, noting that he expects the effect on the market to be long-lasting. “Even Western Digital and Seagate were not expecting high demand like this.”

The global spike in computer storage sales has been attributed to demand caused by Chia, a new cryptocurrency that claims to be more environmentally friendly than BTC. Where BTC uses the proof-of-work consensus mechanism, which requires miners to run powerful computers to solve mathematical problems, Chia uses a novel “proof of space and time” system that relies on unused storage space.

This consensus mechanism sees Chia “farmers” staking out 100GB “plots” on their hard drives, which are filled with hashes; when a new block is added to the blockchain, its hash is compared with the hashes on farmers’ drives, and the closest match receives the block reward.

Chia’s launch has prompted a surge in demand for the computer storage required to farm the cryptocurrency, leading to shortages of hard drives in Southeast Asia ahead of its launch—and causing hard drive manufacturers’ stock prices to spike.

It’s not the first cryptocurrency to spark hardware shortages; ETH miners have snapped up the GPUs used to mine the cryptocurrency, prompting manufacturers to introduce restrictions to their graphics cards to limit their utility for miners.

Although Chia farming requires much less energy than BTC mining, it still has an environmental impact. It invariably requires some electricity to be used, while some critics have raised concerns that Chia farming can “trash” computer storage.

For some odd reason the 'Chia burns out hard drives!' is getting repeated as the fashionable fud. This is odd, because for the most part it's just plain wrong (thread)

Although Chia creator Bram Cohen has dismissed the claim as “fashionable fud,” German cloud service provider Hetzner has banned crypto mining on its servers on the grounds that Chia farming could lead to premature breakdowns of its storage drives.

If Chia farming does cause computer storage to wear out at increased rates (and sparks increased demand for hard drives, leading to more being manufactured), that could negatively impact the growing problem of e-waste.

And if Chia proves to be a success, other cryptocurrencies could follow suit, said Meyer. “Proof of space is a relatively new consensus mechanism, but any number of new currencies could also choose to use it,” he said. “Should the method gain popularity, the demand for storage could increase even further.”