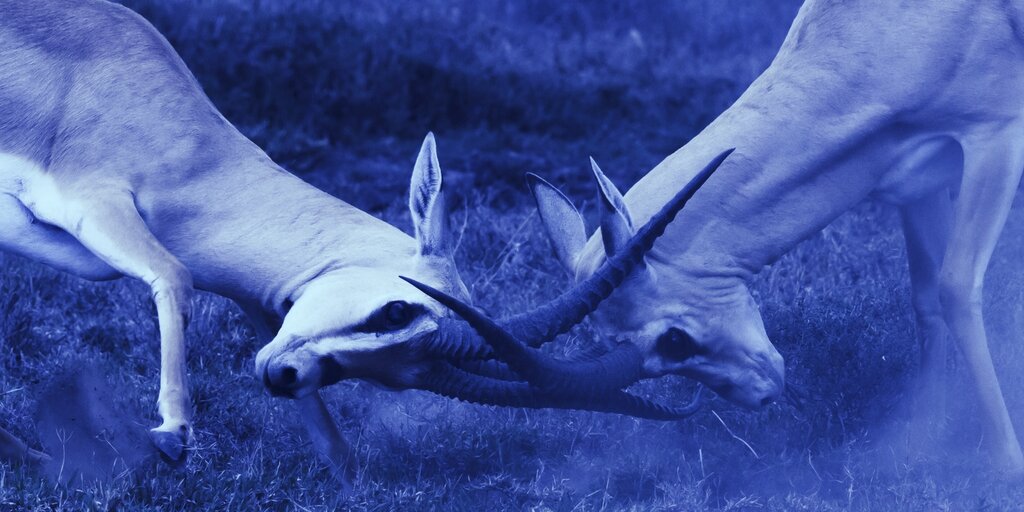 Drama hits DeFi…again! This time, over concerns that Dharma, a portal to decentralized exchange Uniswap, misled people into voting for a proposal that would allow a few companies to steamroll the network into passing any proposal they like. Much of it was bluster, of course, but the debacle pressed on open wounds in Uniswap’s fledging governance system.

TL;DR: We propose a threshold of 3m UNI for proposal submission (down from 10m), and 30m UNI as quorum (down from 40m).https://t.co/MDZkTfwMYt

The three-year-old, San Francisco-based company said that reducing the threshold would democratize the project and “help foster a vibrant Uniswap governance process.”

Yet others said, should the proposal pass when voting closes on October 19, this makes it easier for Dharma and the other major proponent of the proposal, blockchain simulation company Gauntlet, to pass proposals, if they work together. That’s because Dharma and Gauntlet are big bagholders of UNI.

Agustín Aguilar, founder of Pine.finance, a Uniswap dapp, told Decrypt that reducing the threshold encourages “the formation of a cartel,” given that it’d be easier for whales to pass proposals. Amid these concerns, Uniswap’s community fought back by taking more tokens to Uniswap’s voting system, thus preventing the two projects from immediately forming a cartel.

Because my priority is to preserve the integrity of the governance, not to pass proposals quickly.

Any proposal can be passed using an autonomous proposal (https://t.co/06gbE5gYtA), so there is no need to lower the limit (we should increase it)

The fear was that, should the proposal pass, Dharma, with backing from Gauntlet, would have enough power to follow through on its plans to use Uniswap’s treasury funds to pay its own community.

If "FOR" wins, then @NadavAHollander and @tarunchitra will have enough power to control the outcome of *every* Uniswap vote.

1st thing Nadav plans to do is vote-in a $UNI airdrop to his Dharma users from the "community treasury".

If this isn't a governance attack, then what is? pic.twitter.com/TsTfIWjKTN

Dharma says its users are entitled to the money. Last month, Uniswap gave 400 UNI (~$1,200) to everyone who’d ever used the platform. Dharma, along with a handful of decentralized exchange aggregators and Uniswap apps, claim their users were wrongly left out of Uniswap’s airdrop.

Others believe that these projects, which include Uniswap competitors, shouldn’t get the funds. “It’s almost like Apple taking funds from Microsoft’s treasury to reward iPad users,” said Aguilar.

More importantly, Aguilar and others are concerned that lowering the quorum would disenfranchise the community rather than empower it. “If this quorum rate is lower, then this is more like a cartel. Only two companies practically control the governance,” said Aguilar—at least, unless the thousands of other UNI holders pay attention to how the network is governed.

Currently, the smaller fish can propose updates to the network via “autonomous voting,” whereby community members can collectively raise 10 million UNI. Aguilar would increase the threshold, if anything—the market depends on Uniswap.

Dharma thinks high thresholds makes things needlessly difficult for the community—its logic is that, if anything, keeping the threshold up would encourage cartels rather than break them up.

There’s over 150 million UNI in circulation today. Hayden Adams, Uniswap’s founder, said in a tweet in September that there’s “more than enough out there to coordinate a proposal.”

Dharma said that its proposal “achieves the goal of making governance more accessible, while still ensuring that Uniswap governance is not subject to unilateral deleterious actors.” And who says it would conspire with Gauntlet to raid Uniswap’s coffers?

Nick Cote, senior analyst at Hxro Labs, told Decrypt, “Lowering the cost, and thus, barrier to participate, is needed. How can you have a decentralized governance system operate effectively where it costs millions of dollars to enact any sort of policy?”

So far, Uniswap’s community has pledged 30.4 million UNI (about $90 million) in favor of the vote, which ends on October 19. Most of these votes come from two companies: Dharma and Gauntlet. Its opponents have pledged about 630,000 UNI against it (about $2 million).

For Dharma’s proposal to pass, it’d need 40 million UNI to get behind it—that’s roughly $120 million worth of the token. However, the way Uniswap is set up, only about 48 million worth of UNI is eligible for voting—or about $160 million. There’s not much room for error.

“The one outcome we’re sour on is the status quo — AKA radio silence and @UniswapProtocol governance stagnating,” tweeted Nadav Hollander, Dharma’s CEO. Neither Dharma nor Gauntlet have responded to Decrypt’s request for comment.

Stani Kulechov, founder of decentralized lending protocol Aave, which has its own governance system, told Decrypt that it’s difficult to find a balance.

High thresholds are “a way to add security into the governance process and also more solidity to avoid on-going ‘proposal farming,’” but make it difficult for the community to participate and encourage the community to pass their votes to bigger fish.

“It will take some time for communities to find a threshold that fits their needs and each community will most likely have a different proposal threshold,” he said.