Between Saturday and Sunday, the total capitalization of the entire sector exceeded $2 trillion for the first time, thanks in large part to altcoins, led by ETH, which are setting new absolute records.

ETH in particular rose above $2,200 for the first time.

Binance Coin (BNB) is doing better, as it continues to soar above $600, a rise that has seen it triple its value since its lows at the end of February. BNB has increased by a factor of 20 since the beginning of the year.

The second week of April, benefiting from what happened over the weekend, saw a prevalence of green signs among the big names. Binance rose more than 25%, placing itself among the three best risers of the day. It was followed at a distance by Tron (TRX), +8%, and Cardano (ADA) +4.5%.

Privacy coins are also up today, with Monero (XMR) posting a 15% gain and climbing above $340, its highest level since May 2018.

Ripple (XRP) also stood out over the weekend, revisiting $1.5 for the first time since January 2018, although this does not allow it to maintain its third position among the most capitalized, which is solidified by the strong rise of Binance. 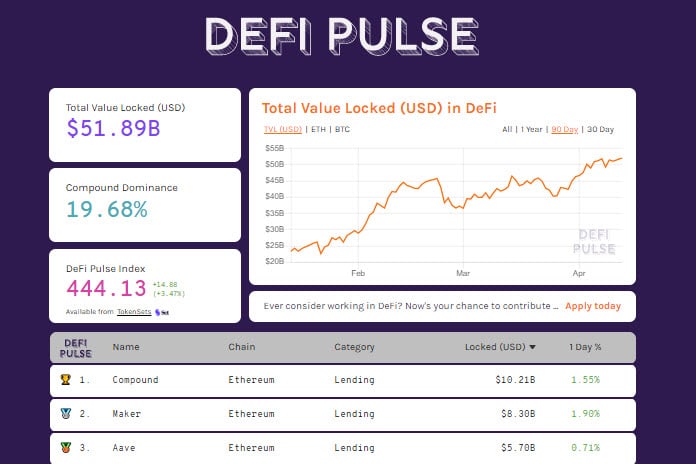 DeFi also set new all-time highs, reaching just under $52 billion. Compound consolidated its position at the top of the list, surpassing the $10 billion mark for the first time ever. Maker (MKR) follows and the third position is a head-to-head between Aave and Uniswap.

BTC (BTC) one step away from highs

BTC is pushing upwards a step away from its mid-March highs. At this particular point in time, the trend reflects the euphoric momentum of the altcoins, a trend that will need to be confirmed in the coming days of the week.

It is necessary not to go below 56,000 dollars, a level that coincides with the lows of last week, reference lows in order to understand the direction of the current monthly cycle.

The new historical records confirm the beginning of the new quarterly cycle. In the coming days of the week, it is necessary to confirm the holding of $1,900, a level that coincides with the previous highs of mid-February, now a support area.

The post ETH: all-time high reached at $2,200 appeared first on The Cryptonomist.