Despite being negatively impacted by depressed market sentiment and downfall in price, the DeFi sector, witnessing a lot of competitive action, grew and developed in multiple ways, according to Messari’s review of this year’s second quarter.

According to the crypto data and research platform’s review, decentralized exchange (DEX)

volumes continued their rapid growth in the second quarter of the year and reached $405 billion, while witnessing an 83% increase since the previous quarter.

Volume halved since May, which marked the high peak of the market, reaching $203,5 billion but despite June volumes falling to $95 billion, the dialed-down month still proved to be the third highest all-time. 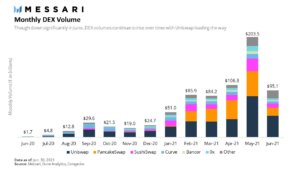 Messari’s data showed that DEX volumes as a percentage of centralized exchange (CEX) volumes surpassed 10% for the first time since October 2020 and according to the review “the data continues to show DEXs eating their centralized counterparts as time passes.” 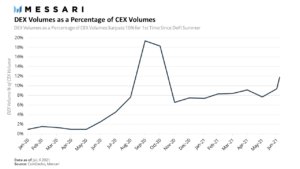 The review reflected on “a pretty dramatic shift” in PancakeSwap’s standing as for a moment in April the competitor DEX that runs on Binance Smart Chain (BSC) flipped Uniswap in volumes.

PancakeSwap market share has plummeted since Uniswap reclaimed the lead following the rise of its V3 protocol, which enabled liquidity providers (LPs) to create markets within customized price ranges.

By the end of June the automated liquidity protocol on the ETH (ETH) blockchain reached a 54% share of weekly volume, the highest since November 2020, and now accounts for more than 40% of all DEX volume. 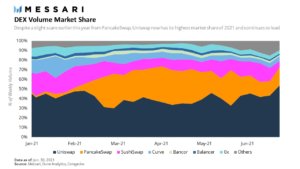 BSC ecosystem experienced the toughest pullback following May’s market crash as total value locked (TVL) fell more than 50% from its peak in just a few days, though the rise of Polygon, a protocol that transforms ETH into a full-fledged multi-chain system, played a crucial role in decreasing its share in volumes as well.

Unlike ETH’s TVL, which has plenty of stablecoins in the mix, its TVL was “heavily skewed towards the higher end of the risk spectrum making it extremely sensitive to market swings.”

In combination with a series of hacks and exploits on BSC, which led to substantial losses, the blockchain “saw speculation dry up dramatically in June leading to PancakeSwap volumes diving 69%.” 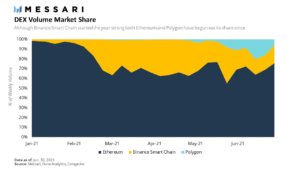 According to the review, “the activity provided a great glimpse into the developing liquidity wars between blockchains.”