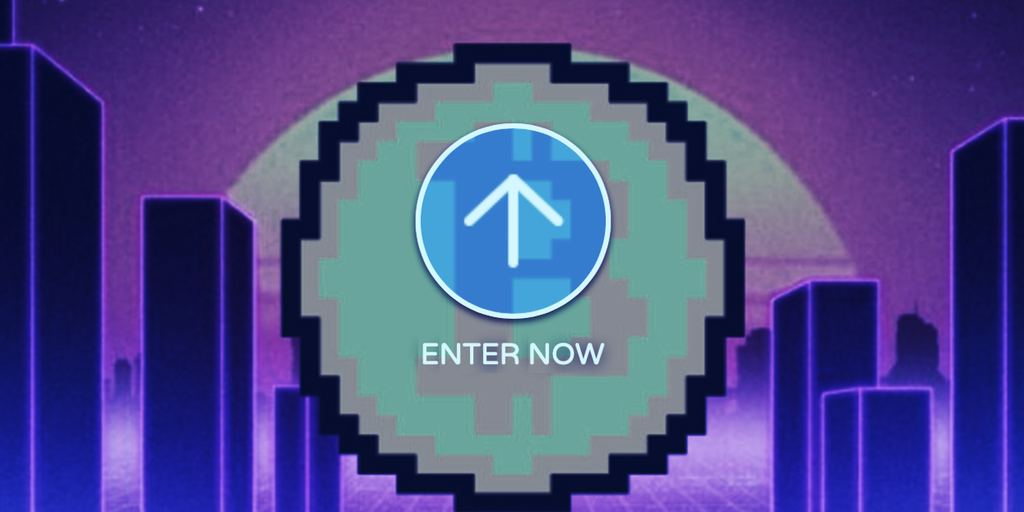 “Life is a blockchain and then you die.”

These sharp, cruel words are the first things I see as my disembodied, virtual form floats into the secretive Bitcoin Cyber City.

The next three things I witness are even more bizarre. A kitty-shaped pink neon light winks out into the street, there’s a skeleton slumped over the handlebars of a motorcycle, and the huge yellow eyes of a giant pumpkin stare me down. I feel unnerved, an outsider in this godforsaken world.

I hover along the pavement, carving a path through the shadowy mist that sweeps across the tarmac. The silence is deafening. It tells me that I am—much to my surprise—alone in this virtual world. But what am I doing here? Why did I enter this ghostly city?

It was a few days ago when a tweet grabbed my attention. It gave me instructions on how to enter a virtual world, which I had never heard of, called the Bitcoin Cyber City. With meatspace on lockdown and everything going virtual, perhaps this was where the army of dedicated Bitcoiners—who usually spend their time attending events all over the world— had migrated to.

How to get in the #BitcoinCyberCity

You can now explore in 2D or #VR pic.twitter.com/xV6REzsUKa

I imagined a world where the only books were on Austrian economics, where “ICO” was a curse word and where a copy of the Bitcoin whitepaper nestled in every hotel drawer.

And then I had a thought. Among the hustle and bustle of a thriving Bitcoin city, any one avatar would be able to lurk unnoticed—seeing without being seen. And what if, among all these virtual citizens, the very inventor of Bitcoin was sitting among them, watching the community built around his creation evolve? What if I was about to come face-to-face with Satoshi Nakamoto himself? Or herself? Or themselves?

A tension between worlds

I raise my head to the sky and my gaze comes to rest on an “In Bitcoin We Trust” poster that dons the mask made famous by Anonymous. I’m reminded of Bitcoin’s humble beginnings as a currency governed by privacy and a rejection of the state’s prying eyes, as I think of Satoshi’s words: “We can win a major battle in the arms race and gain a new territory of freedom for several years.”

I turn my head. Those thoughts are offset by a poster hanging high at the top of the street, warning me that Zuckerberg was watching. I realize the poster hung high above a police car parked on the side of the road. Even here, in a Bitcoiner’s libertarian utopia, the objects of mass surveillance remind me about the underlying need for privacy.

The quick transition from an Anonymous-themed poster to what looks far more like a scene from Minority Report focuses my mind on the pseudoanonymous nature of Bitcoin. Yes, my Bitcoin identity might be anonymous, but my Bitcoin activity, forever logged on a public blockchain, will always be surveilled, never truly private.

I turn my eyes away from the surveillance themed artwork and am greeted by another user staring right at me. It turned out I was being spied on. Perhaps it was naive of me to think I was alone after all.

I walk up to him, wondering for a fleeting second if there was even a tiny chance this could be Satoshi. But it doesn’t feel right, the city is too empty and desolate.

The user’s name is eSwincicki. I add him as a friend, and walk right up to say hello. Maybe he would let me into the secrets of this city, we would find a speakeasy bar and talk Bitcoin until the early hours. He ignores my friend request, and walks away—suddenly jumping, or glitching, into the distance.

I look around; there has to be something I’m missing here.

Monsters lurk in the dark

I turn to my left, pausing for a moment to appreciate a Lamborghini on the side of the road. It’s a symbol of the Bitcoin dream, the idea that anyone, anywhere could invest and become rich. But since the promised Lambos have failed to appear for many investors, the digital supercar seems like an emblem of lost dreams.

Then two massive spiders appear out of nowhere.

They’re black, with fangs the size of my hand primed and ready to snatch their prey. Their orange arms look long enough that they could reach out and grab me in an instant. Their bodies, each the size of a car, challenge me to settle for an alternate route. I’m not exaggerating when I say these spiders are huge. One takes up the entire width of the street.

I’m drawn to them. I get closer and walk below one. While passing below the spider’s massive head, I’m distracted by another piece of Bitcoin-inspired artwork to my left. “KYC: don’t submit, you have a choice!” it says.

It’s important to note here that I’m a former regulator at the Gibraltar Financial Services Commission. The thought of someone opposing KYC was a wild proposition to me. I believe that KYC is important, so the poster was even scarier than the giant spider I was standing under. Before I know it, I’m through unharmed, setting my sights on Dirty Fiat Boulevard.

Rage against the fiat machine

From here on in, most of what I find in the Bitcoin Cyber City is set up in defiance of traditional fiat currency. A legacy left behind by Satoshi Nakamoto before he disappeared without a trace.

Then I turn a corner and come face-to-face with Satoshi himself.

Bitcoin’s creator is imprinted, lifelike, on a poster stuck against a wall. His arms are outstretched, pointing directly at me, in the likeness of Uncle Sam. His message is that, “Only Bitcoin can save you from financial ruin.”

Did Satoshi know something I didn’t? Why was I heading for financial ruin? Getting frustrated with so many unanswered questions, I take out my phone and message Swisscryptocat, the pseudonymous creator of this world, on Twitter.

Photo taken in the #BitcoinCyberCity #VR world on @AltspaceVR

“The motivation was to create a VR world where Bitcoiners would feel comfortable, that would stay open permanently so people could catch up there anytime to discuss Bitcoin,” he tells me.

So I was right, to some degree, that the goal was for everyone to mingle here. Only it isn’t taking off, at least not right now. Perhaps some new buildings—and a monetary incentive—might fix that.

“I also added 4 secret rooms (+ one to come soon) that you can find exploring the city and you can win free Bitcoin Satoshis by finding them, to give people an incentive to explore each street corner,” he says.

Swisscryptocat argues that, even though there has been little uptake, this world is still important for the Bitcoin community. “It helps Bitcoin adoption because the world is filled with details and easter eggs about Bitcoin culture, and makes most of the newbies ask a lot of questions, like ‘who is this guy in the picture?’ and ‘what is KYC?’” he tells me.

I go back in the world, searching for these hidden rooms while keeping an eye out for Satoshi.

A satoshi for your troubles

Along my way, there are many buildings I can’t enter, but the praise for crypto over fiat exists behind every window I looked through. One room champions a rather large piece of artwork, inspired by the Illuminati’s all seeing Eye of Providence, with a nod to Bitcoin’s blockchain.

“In math we trust,” the poster declares.

I suspect I’ve reached the edge of the city, with my only option to turn around and walk back to where I first encountered the giant spiders.

Not so fast. I spot a QR code and I’m curious. I walk towards it.

Inspired by the name of Bitcoin’s creator, the QR code plastered on the wall of one of the city’s largest buildings was a satoshi faucet. This harks back to Bitcoin’s early days when Bitcoin faucets gave out free Bitcoin. An early one even gave out five Bitcoin at a time, an amount now worth $57,000.

“You can use this faucet until it runs out! Send it to your friends, print it on a poster, etc,” the poster said.

I take out a satoshi using the Bitcoin lightning network. A message above the QR code tells me I can only have one satoshi per minute. After the time elapses, I take out another.

But I had a feeling that this wasn’t going to make me rich. I thought back to the “In math we trust” poster and figured I could calculate it. I work out that, at current prices, it would take me around 190 years to earn a whole Bitcoin. And the faucet would probably cut out long before that.

At this point I decide to leave the world that some speculate will be our future. I hope that, if it does happen, there will be fewer giant spiders. And though I may not have found Satoshi, at least I found some satoshis.