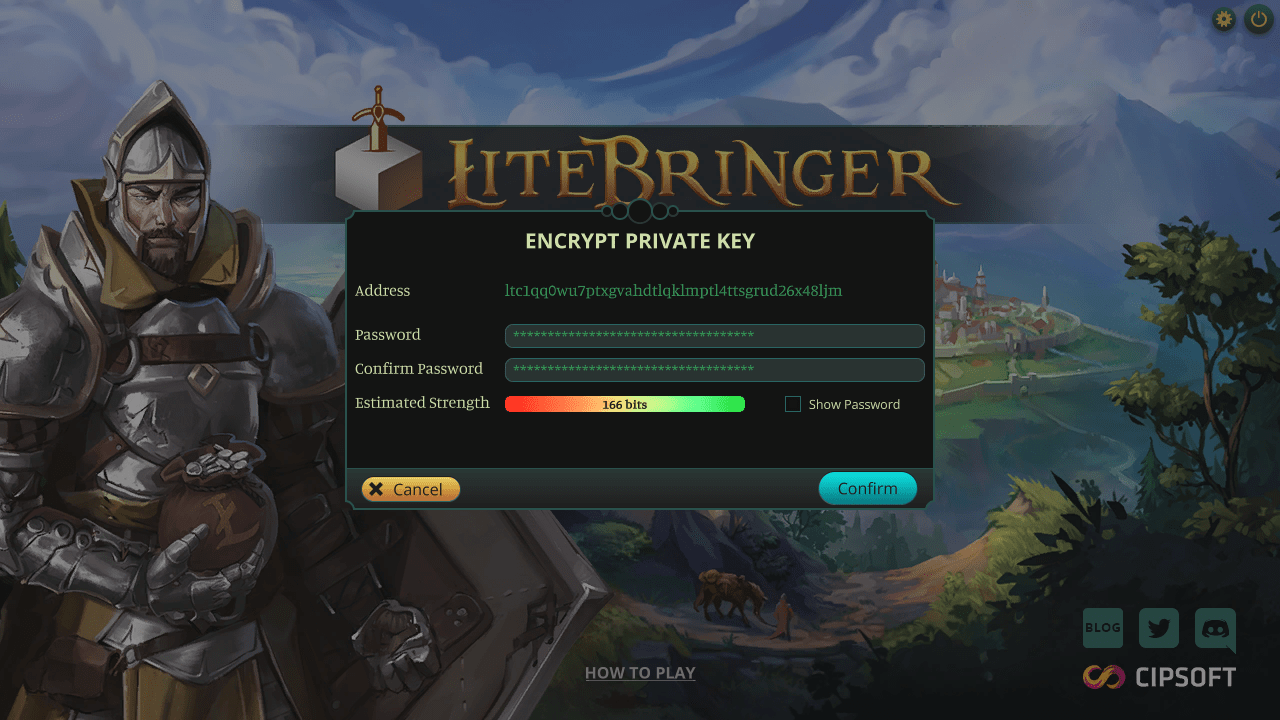 Nowadays, when it comes to blockchain games, it is impossible not to mention LiteBringer, hence this guide.

We will take a closer look at the game with useful tips and strategies to maximize revenue, seeing that with this game it is possible to sell and buy digital assets by monetizing them in Litecoin (LTC).

Guide to how LiteBringer works

It is advisable in this case to take advantage of the Mac Boot Camp so as to use 100% of the resources, rather than using a software solution that virtualizes another operating system.

In any case, once the game is started, we will have to create an account and we will automatically be given a Litecoin address with a private key, which is conveniently saved in a PDF file to be kept in a safe place. Finally, a password must be created to access the game.

At this point we’re in the game to all intents and purposes, but there’s one fundamental step we’ll have to do: see if the faucet is active. To do this we need to click on the button at the top right where the settings gear is and click on “Get Coins” to retrieve 10 lites. Note that 1000 lites are equivalent to 1 Litecoin (LTC). 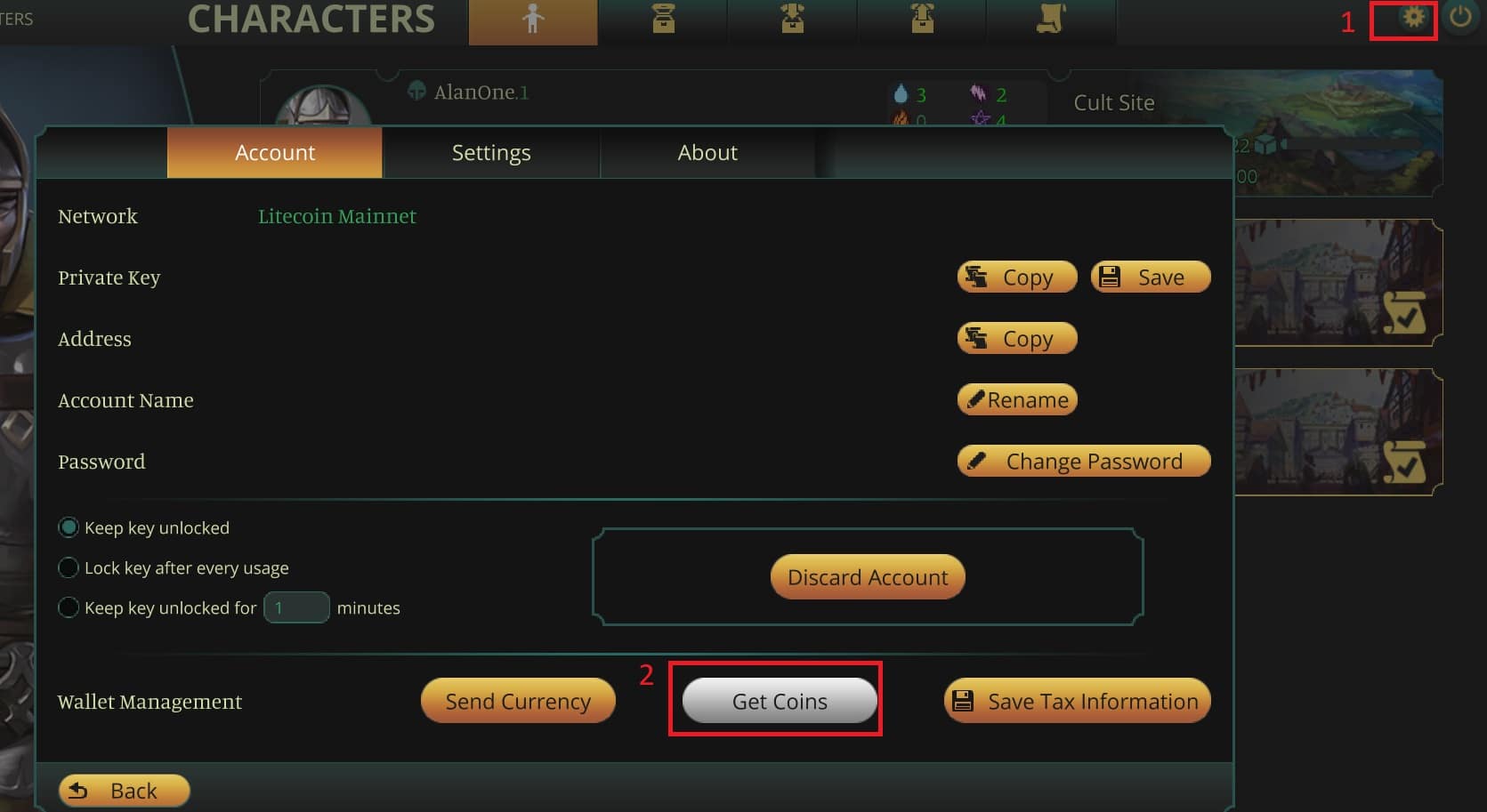 After obtaining our lites, we can create our character by clicking on the button at the bottom right “Create Character”.

We can choose between 3 classes:

After that, we will have to choose the name and sex of our character and click on the “Create Character” button, which will turn blue. Finally we need to confirm the transaction which will cost us 0.00132 lites. 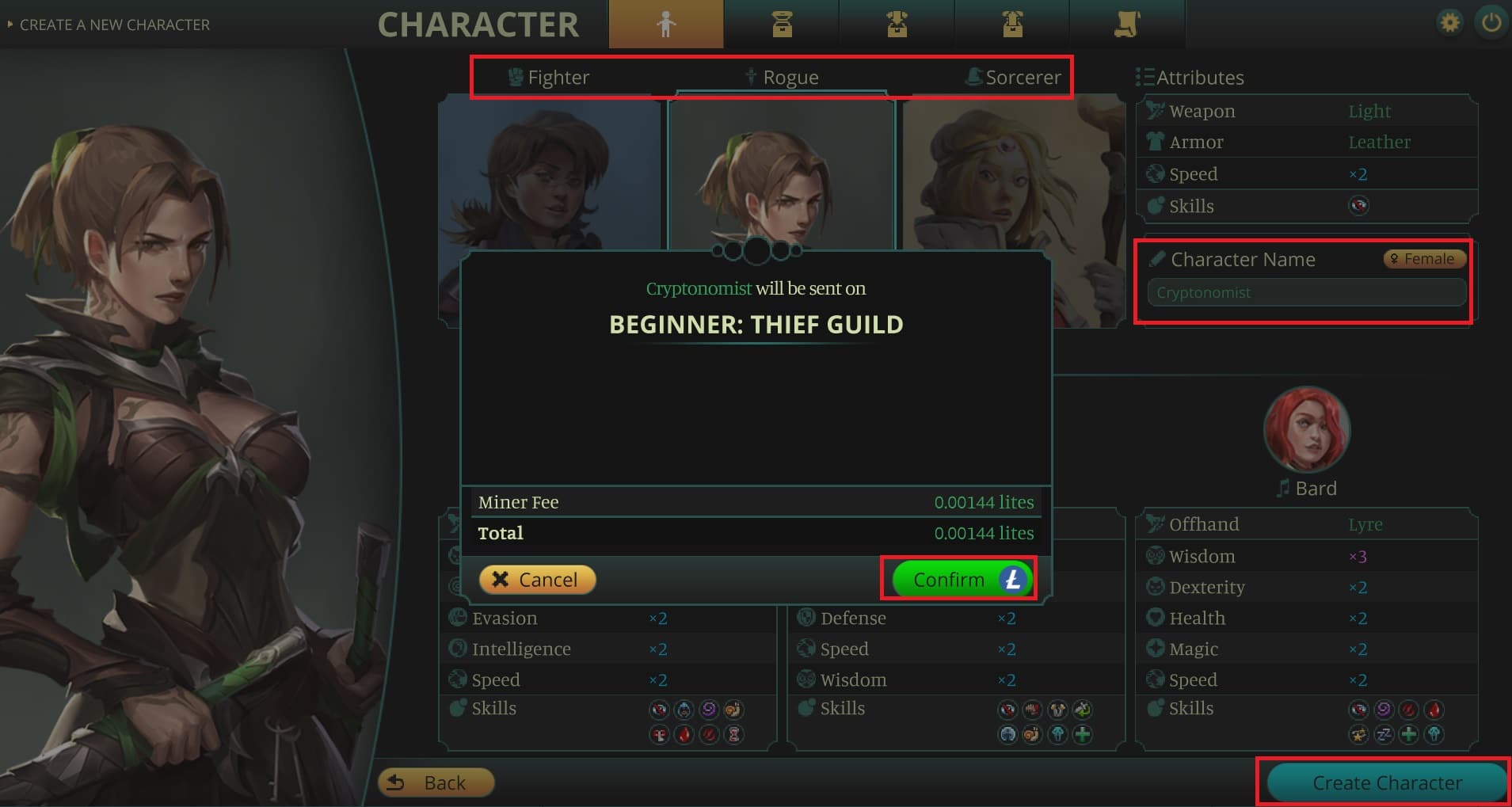 Each time we make a transaction to create a character or send him or her on a mission, we will have to wait some time before the transaction is recorded on the blockchain. We are talking about a few minutes or at most ten minutes, depending on the congestion of Litecoin.

Once the character has been created, in the dashboard we can see its parameters such as power, evolution and level and next to it we will also find the icon of the completion of the missions and the chest with the various objects in our possession. 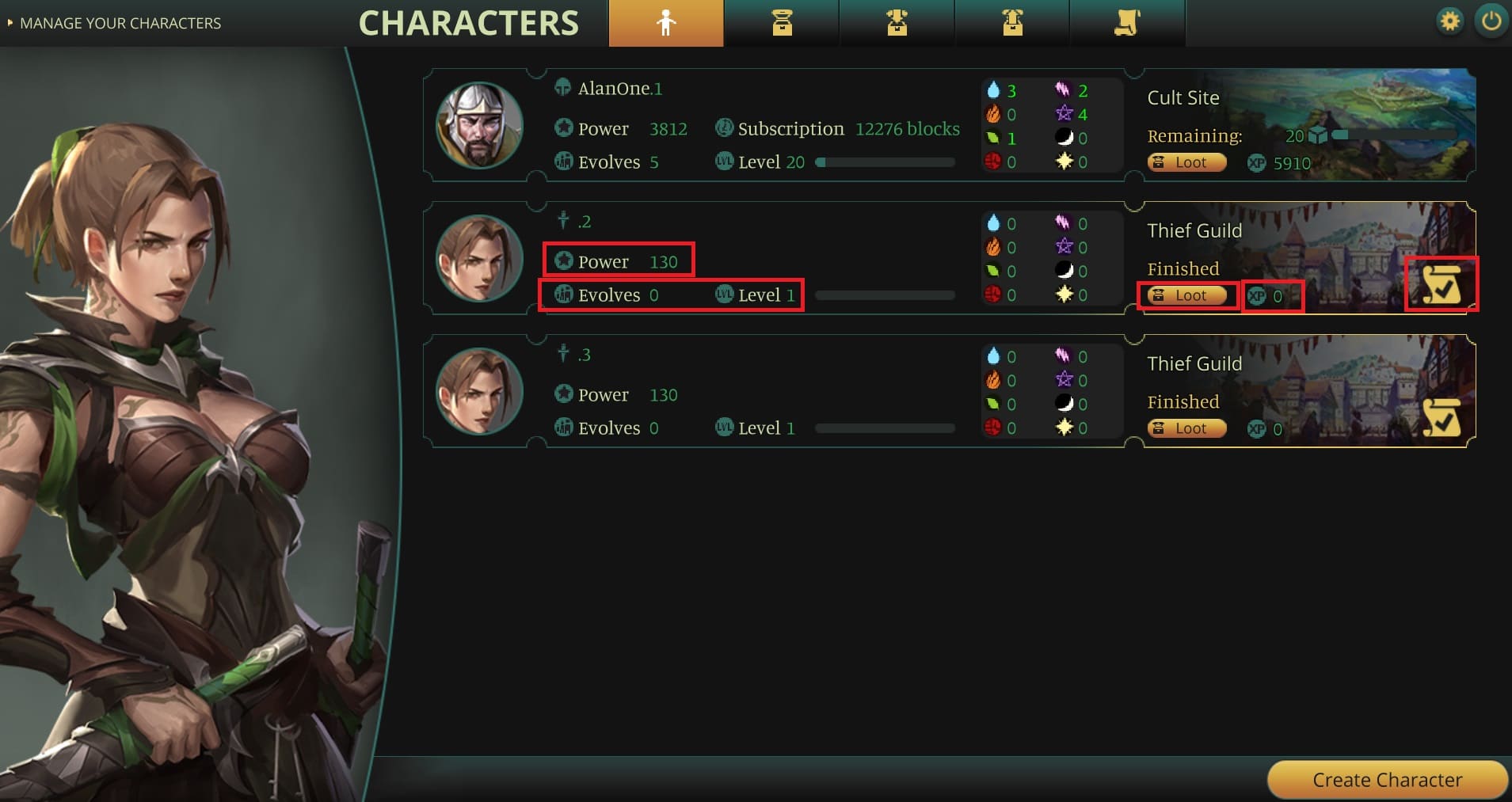 Before we continue we have to explain the system of the characters and their attributes.

First of all each character can evolve infinitely and every time you get to level 30 each level increase involves an increase in power of about 1000.

The same goes for the various effects, which are many, to which bonuses and maluses are applied.

Let’s proceed with the game and explore the map of the Asirenia region. Considering that we will start from the first level we will only have one mission available.

If the mission is green then we will win it, otherwise we will definitely lose it. Some missions require certain keys to be unlocked, so it is always advisable to do all missions as soon as they turn green.

In addition, each mission can provide us with items such as weapons, armour and even parchments to evolve our character skills, which are 4.

But there are also missions that provide us only experience or others that provide mainly stones of the elements, which serve to evolve our objects, evolution that follows that of the character.

To understand the bonuses and maluses of an opponent, just move the mouse cursor over the enemy to see all the information and which elements and effects are weak or strong.

The subscription lasts about a month, but is measured in blocks, so each mission will consume a number of blocks proportional to the time and difficulty of the mission.

For example, in the early levels we will be able to complete about ten blocks at a time and then progress to 70 or 90 blocks at a time. And since these follow the progress of the blockchain, the time is variable: for example, 36 blocks take about 90 minutes.

The rounds determine how many times we can take an object: for example, in 9 rounds we’ll take at least 9 objects, although the amount depends on the mission and the % drop of the object.

Now, instead, let’s examine the objects.

For each character we have 10 objects that can be obtained and equipped in every slot, although the rings must be counted twice.

Each object has its own rarity level from 0 to 3 stars, but there are also legendary objects: the higher the number of stars, the greater the increase we will have when we evolve them.

The advice is therefore to sell or dismantle objects that are not 3 stars and evolve only the 3 stars.

To confirm the equipment, we will need to send our character on a mission. The missions vary from level I to level V. Changes will be recorded on the blockchain.

If we want to level up our objects, which in this case evolve every 15 levels, then we need the stones of the various elements, depending on the object we have.

It takes 4099 for each object to increase to level 15. Simply select the object to see both the number of stones you need and how many you have.

Once you have enough stones, you can press the “Level Up” or “Level Max” button, but first you have to send your character on a mission.

Now let’s move on to the game’s internal market where we can buy and sell items, stones and shards.

To do this we have to click on the central icon at the top and we can choose whether to display items for sale, characters for sale or resources.

We can filter the results according to various parameters. It is always better to buy the 3-star items and click on the “Purchase” button to confirm the transaction.

If we want to sell one of our items or characters, then we need to click on the fourth icon at the top of the game and then press the “Create Sell Offer” button. On the next screen we will then have to choose the type of offer. 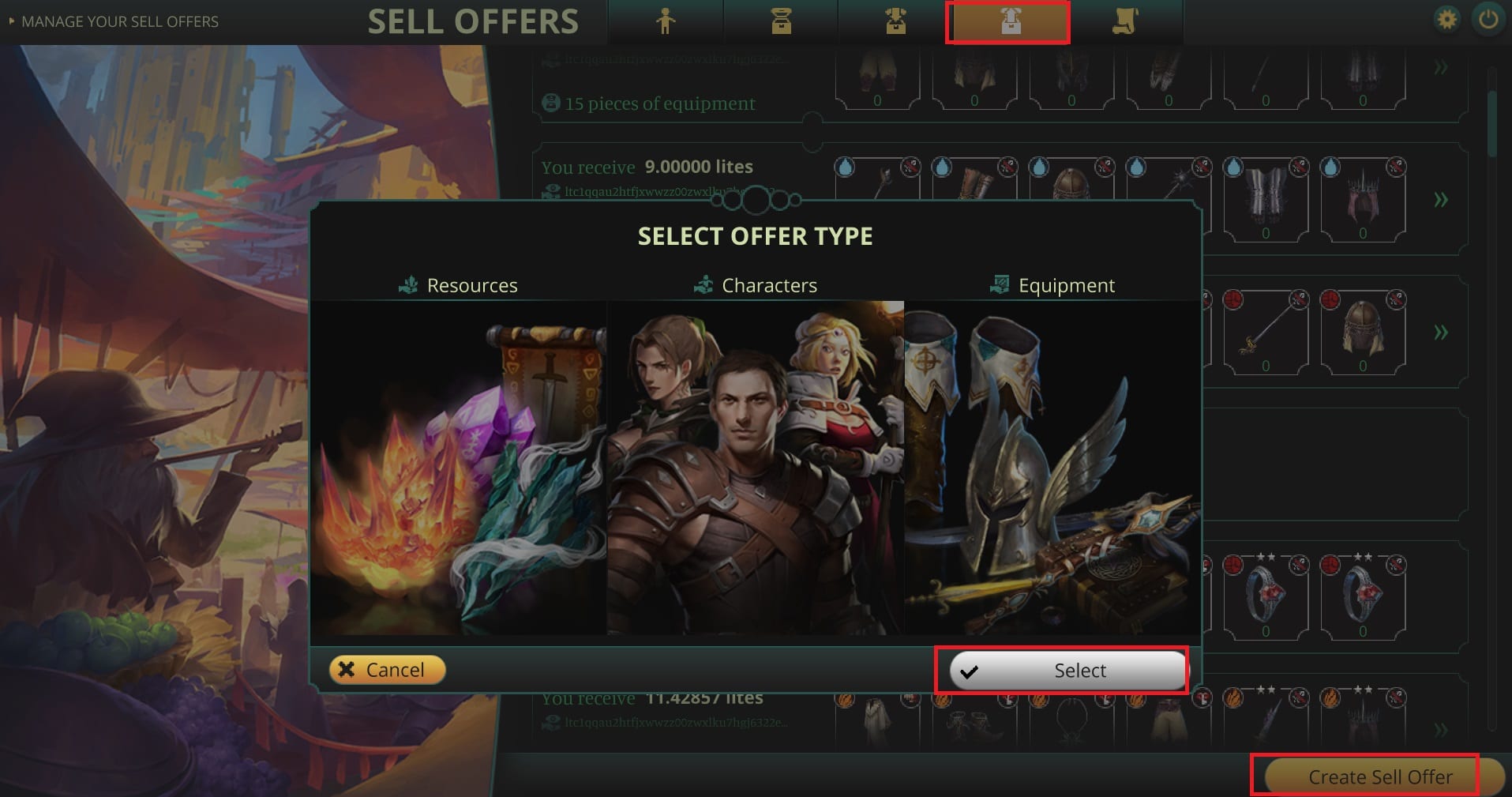 Now all we need to do is select what we want to sell, the quantity, the price of the offer and whether we want to charge the buyer for trading fees or include them in the offer.

It is advisable to adjust the price to market values, in the sense that if an object is at 0.1 lites, there is no point in selling it for 1 lites, as no one will buy it.

Also, if we have more objects to sell, it is better to put them all together and order them by elements, effects and positions, since it makes no sense to sell double objects in the same offer, but it makes sense to make an offer with 10 different pieces, so as to make it attractive to the public.

Surely the most valuable pieces are the legendary objects and scrolls, since they are the most difficult things to get inside the game, so if you want to earn a lot of money then it is better to sell that kind of objects: scrolls are sold between 8 and 15 lites, while legendary objects from 20 lites upwards.

Interesting to note that the orders remain active until they are completed, so we can monetize even after several days or months.

Finally, some practical tips for playing cleverly are:

The post Guide and tips for the game LiteBringer appeared first on The Cryptonomist.