Bill Gates’ company wants to take advantage of the virtual world to improve the home office and change the way we consume technology. This may be the way for you to seek profits; know how.

There is nothing else to talk about in the world of technology: the metaverse fell once in the mouth of the people since Mark Zuckerberg decided to change the name of Facebook for Goal. And Zuck isn’t the only one making this bet. There are big players moving to embark on the new trend that intends to be the future of the internet ‒ a adidas and the Nike are already creating costumes for avatars, the Disney wants their physical entertainment experiences integrated with digital, the gaming giant epic sees in the metaverse a “trillions opportunity”…

Among so many big names betting on the metaverse, one gains special attention: the Microsoft.

the company of bill Gates it is a pioneer in many aspects: it revolutionized personal computers and introduced important work tools such as Word, Excel, PowerPoint and Teams. Now, with the metaverse knocking at the door, big tech is not far behind either. And she can stand out from the Meta in this race through the virtual world.

How Microsoft is investing in the metaverse

Even before Facebook’s rebranding, the Microsoft was already pulling strings towards the Web 3.0. In March of this year, big tech announced its own version of the metaverse: the Microsoft Mesh.
The first innovation proposed by Microsoft Mesh is the use of animated avatars in Teams videoconferences, software widely used for corporate communication. In the next semester, your work calls may be hybrid, like the model below: 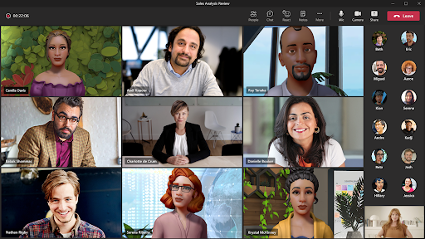 Big tech also plans to integrate other of its software into its virtual experiences (imagine presenting a PowerPoint in the metaverse). With that, she appeals to the strong trend of home office, offering tools that improve integration between coworkers and enhance the work-at-home experience.

It is significant that the company takes its first step into the metaverse on a platform that is already widely consolidated and used around the world, such as Teams. In this way, the Windows company ends up introducing the virtual world in a more organic and natural way in people’s daily lives.

Microsoft vs. Meta: giants battle for the metaverse

When such a huge innovation is at stake, it’s only natural that players as big as Meta and Microsoft end up competing with each other. But in the race for the metaverse, Bill Gates seems to be leading the way…

And I’m not saying it, but portals specialized in technology coverage.

Fast Company, a business-focused media company, says Microsoft’s plans for the virtual world are even more ambitious than (ex) Facebook’s:

Venture Beat, a site focused on techs and analytics, went even further and published an entire article dissecting why Gates’ company can surpass Zuck in the metaverse aspect:

Title of the article reads: “Why Microsoft can surpass Zuckerberg in the metaverse”.

According to the site’s analysis, big tech has a better understanding of how people actually use technology, presenting a more realistic perspective for the metaverse. The article also points out that Microsoft could be one of the future leaders in this virtual world.

It is important to remember that the opinion of these portals is not an absolute truth and you may well disagree. But it is a fact that, when compared to Meta and other players, Microsoft’s metaverse has a clear differential: it does not require expensive and uncomfortable technological devices, such as virtual reality glasses and headsets. To enter the company’s alternative digital universe, all you need is a smartphone or a computer.

Also at an advantage in relation to the Goal, Gates’ company excels in an important aspect: the reputation and data protection. The controversies involving Zuckerberg are always filling the news and the founder is considered almost a “great villain” in the tech universe.

Add this to the fact that the company itself has serious data protection issues. the recent accusations of former employee Frances Haugen ended up further damaging the company’s image, which had been in dire straits since the Cambridge Analytica scandal.

In case you don’t remember the case, I refresh your memory: in 2018, the political marketing consultancy managed to steal the data of 87 million Facebook users and, with this information, influence the opinion of several voters.

Big techs are betting heavily on the metaverse; why would you be left out?

Whether Microsoft or Meta, the fact is that the biggest companies in the world are embarking with everything in the metaverse. And it’s not hard to understand why:

The metaverse is expected to move $800 billion by 2024, according to estimates by the Bloomberg Intelligence Unit.

It is already possible to see the financial potential of this alternative universe: recently, a digital terrain at Decentraland, one of the most popular metaverses in the world, was sold for the price of a house in Manhattan, the noblest region of New York. That’s because the digital worlds are still in their infancy. Imagine the potential of this sector a few years from now.

For George Wachsmann, we are facing opportunity to invest in a business in its early days, to seek expressive profits in the future . History has already proven that whoever invests in innovations before they become mainstream is the one who profits most. Just remember the case of the internet itself, BTC, Netflix, Tesla….

Do you want to seek profits from the metaverse? Don’t limit yourself to Meta or Microsoft

O investment in the metaverse is promising, but as with all types of assets, you need to diversify your portfolio to have more chances of success (and making money). Investing in just one metaverse company is not the wisest option when betting on this new business. I explain why. To be implemented, the metaverse depends on three main elements:

Hardly a company will only master all these elements with mastery. Therefore, diversification is a more interesting strategy to invest in the next technology trend.

6 thoughts on “It’s not just Facebook… Microsoft is also investing heavily in the metaverse; see how you can profit from it”