Myanmar’s government has technically become the second in the world to accept a cryptocurrency as official currency. According to the matter of Bloomberg Canada, the National Unity Government (NUG), declared stablecoin Tether (USDT) as legal tender in the country.

The measure was announced this Monday (13), as official announcement of the NUG. The communiqué is written in Burmese but bears the names “USD Tether” and “USDT” in English. 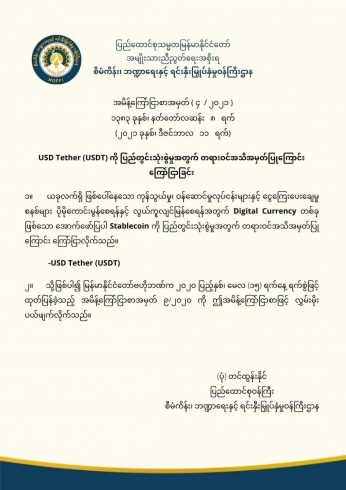 Led by supporters of leader Aung San Suu Kyi, the NGU has operated a parallel government to the regime since the February 1 military coup. As a result of the coup, San Suu Kyi and other members of the government were arrested by the military junta.

In this sense, USDT is being used by the parallel government to raise funds in the fight against the military regime. So far, the government has raised $9.5 million through the sale of “Special Titles for the Revolution,” used to pay the costs of the resistance.

The NUG’s decision to make the USDT official currency has two objectives. First, stablecoin is not controlled by the country’s military junta, which has no access to the funds. Therefore, money raised by the parallel government via USDT cannot be frozen or confiscated.

Second, the military government recently banned the use of cryptocurrencies, as mandated by the Central Bank of Myanmar in May last year. Therefore, accepting the USDT is an act of direct challenge to the current regime.

“The main reason behind the incorporation of the USDT is for domestic use, to facilitate and accelerate the current commerce, services and payment systems”, revealed Tin Tun Naing, Minister of Finance of the NUG.

However, no further details were disclosed regarding the use of the USDT, nor how the NUG intends to circumvent the official ban. The shadow government was recognized as the official government of Myanmar by the French Senate and the European Parliament in October 2021.

NUG’s decision to accept and use USDT as official currency did not have as much impact. After all, the country is relatively unknown and the NUG is a shadow government. Although it has support from the European Union, the United States has not issued an official position.

However, the use of USDT can cause problems between Myanmar and the EUS, mainly because of the opacity of stablecoin. Tether has been constantly accused of issuing USDT without backing, while the US government seeks to enforce strict stablecoin issuing policies in general.

However, it is a fact that today there is a second government in the world (after El Salvador) that adopted a cryptocurrency as its official currency. Given the benefits of cryptocurrencies, especially in countries that are oppressed by their governments, this practice could become a strong trend in the coming years.

High inflation – there is nowhere to hide