Since the rebranding in February 2021, Polygon (MATIC) has been on the upswing. At that time, the company set itself the goal of becoming “ETH’s Internet of Blockchains”. The main aim is to be able to process transactions faster using its own scaling technology and to make its big sister ETH more attractive for DeFi applications. Polygon would like to improve the existing ETH system and not replace it. The MATIC price has been increasing diligently since February 2021: in the past week alone, the price has increased by 20.69 percent.

Recently published figures regarding the overall supply, however, doubts about the network arise, because the 100 largest MATIC addresses hold over 90 percent of the tokens. A closer look reveals that the top 10 addresses together hold almost 75 percent. So is Polygon really centralized – and: does that slow down the rise of the MATIC token? 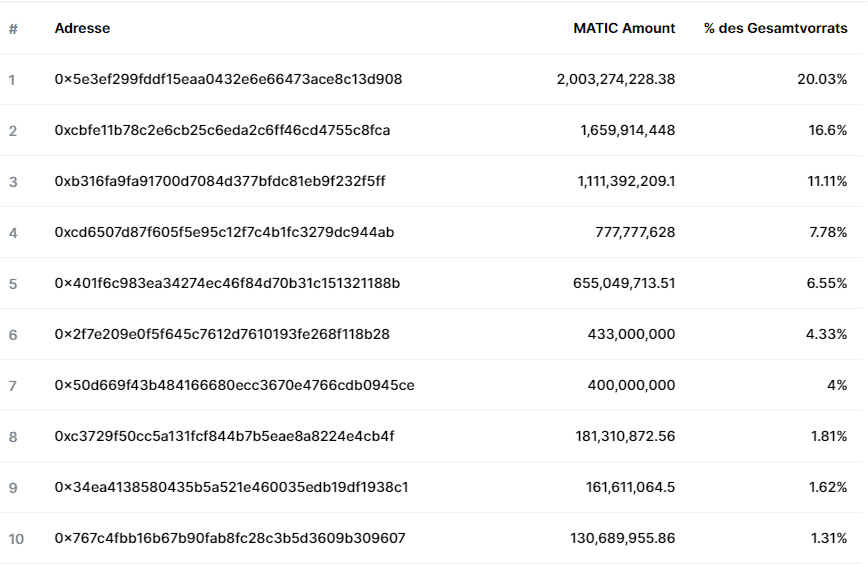 Always slow with the fast horses

When looking at the distribution over the past three months, it becomes clear that it has never been any different. The top 100 addresses have held over 90 percent of the total supply for three months, the top 10 addresses over 75 percent.

Instead, it is rather noticeable that the number of active wallet addresses has gradually increased in the last three months:

Whereas on June 23, 2021 there were 134,589 addresses, there are already 225,797 stopping addresses today. As BTC-ECHO reported, Polygon achieved even more active addresses with MATIC on September 30th than its big sister ETH.

The largest addresses belong to Polygon itself

When looking at the addresses, it is also noticeable that the largest, the second largest and three more are smart contracts of the polygon network. The first is the Polygon Staking Contract, which with over two million MATIC holds around 20 percent of the total available volume. The second largest is the Polygon Vesting Contract, which with its 1.6 million MATIC manages around 16 percent of the offer.

The following diagrams from Glassnode confirm, however, that this distribution of the supply in the polygon network is by no means a new phenomenon, but has existed for years.

In order to make statements about the centralization of the polygon network, however, one should not (only) orientate oneself to these facts. Instead, there are special variables such as the Gini coefficient or the Herfindahl index. While the Gini coefficient is used as a measure of distribution, the Herfindal index is a metric for decentralization, according to Glassnode. According to the platform, this measures

the share of addresses in the current offer and is defined as the sum of the weighted address balances in the network. A high value indicates a high concentration of supply, while a low value indicates a more even distribution of funds across the addresses. Stock exchange addresses, smart contract addresses and other special asset-specific addresses (such as team fund addresses) are excluded.

The above graphic shows that the centralization of the polygon network is steadily decreasing. In the course of increasing applications in the DeFi area and the planned expansion of the network in the direction of NFT, it is to be expected that this trend will continue in the future. This would benefit a wider distribution of the MATIC tokens. The polygon network is currently under development, which could be a possible reason why the company currently holds a large part of the tokens. When asked by BTC-ECHO whether this situation will change in the near future or at all, the company has not yet responded.

Half of BTC investors have entered the market this year, says Grayscale