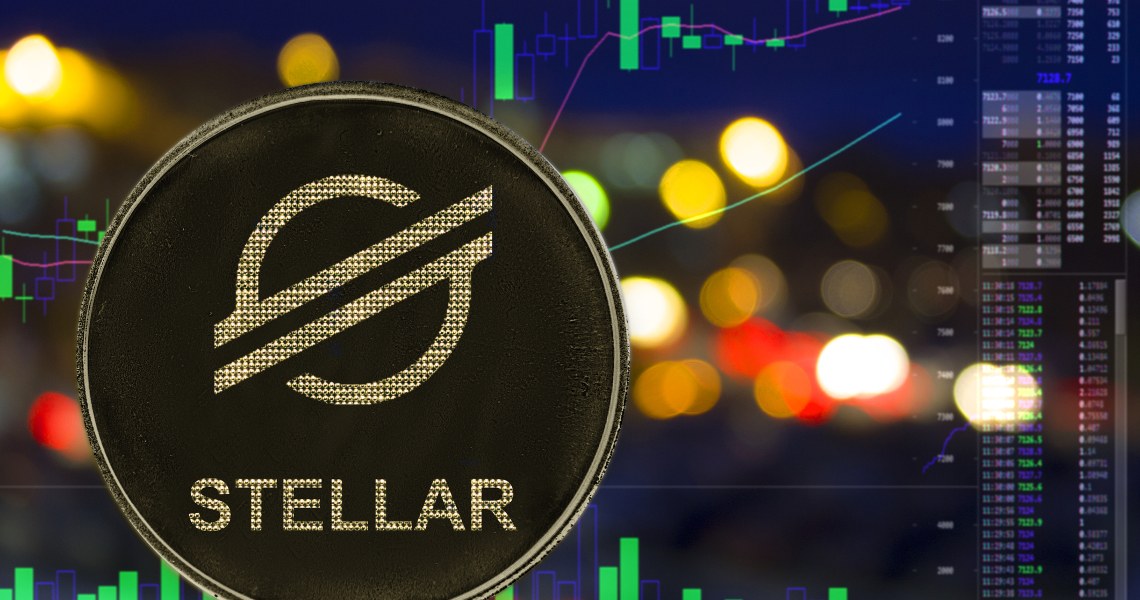 After having sprinted almost solo in the last few weeks, following double-digit increases that have achieved seven consecutive weeks of positive results (not happened since the end of 2017), Bitcoin lets the altcoin sector continue this sprint, and among them, Stellar stands out with the price that today rises by 60%.

Since Sunday, a strong recovery has begun, which has seen a recovery by Ethereum that after having hesitated for several days under the $500 threshold, breaks this level and very easily reaches $600, the highest in the last two and a half years, with prices close to $620. These are levels that ETH has not recorded since the beginning of June 2018. It was a different context from the current one, it was the middle of the storm that was bringing down prices by more than 80% with the lows recorded at the end of December 2018.

In spite of a jump that, from the levels of Friday, sees the prices rise by 3%, a trend that continues also today with a rise that sees ETH gain over 4%, this performance passes almost in second place.

In fact, Ripple (XRP) today flies more than 50%, a performance that is added to the excellent ones of the last days, for an increase of 130% that brings it back to 73 cents of dollars. These are levels that have not been recorded since May 2018. In just two days, XRP has put aside more than two years of suffering.

This trend is followed by Stellar (XLM), which with a jump upwards recovers 18 cents, with quotations returning to the levels at the end of November 2018. Although it hasn’t had a particular bearish trend like the one highlighted by Ripple since the beginning of the year, XRP and XLM are travelling hand-in-hand.

Despite the good performance in 2019, they are the only ones among the big ones to have had a negative trend.

Stellar achieved an increase that is half that of Ripple. XRP from the lows of November 2nd flies over 240%, Stellar instead from the lows of early November rises +160%. They are both standing out these days, with a run that makes them the best among the top 100 of the day. Stellar does best of all with a flight of 60%, while Ripple is climbing more than 50%.

In third position Verge (XVG) is back to shine with a 35% jump.

There are many performances that today travel in double digits on a day characterized by the green sign with more than 80% in positive.

On the opposite side, there is a strong aggressive speculative bearish movement on SushiSwap (SUSHI), over 10%, the only double-digit decline.

These last few days and these new records are causing the total market cap to fly over $560 billion. The trading volumes are also impressive, with $375 billion traded on exchanges in the last 24 hours. 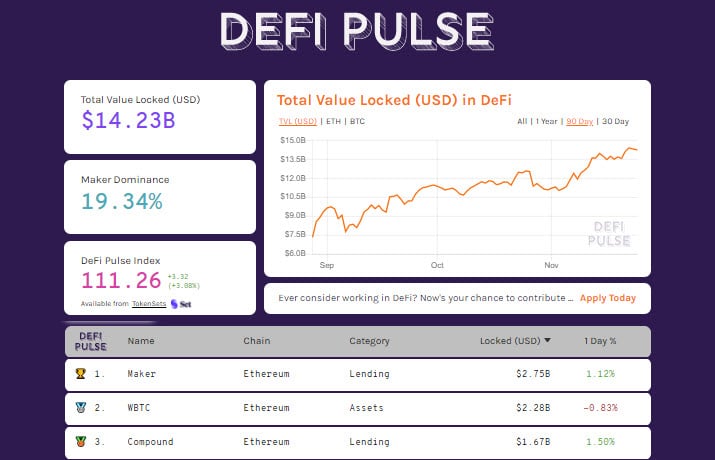 DeFi continues to grow, although not with the same intensity, thanks to the tokens used as collateral. The Ethereum haemorrhage continues, falling below 6.7 million ETH, the lowest level since the beginning of September. Tokenized bitcoin remain stable, although below last week’s peaks, just under 169,000 BTC tokens in decentralized finance.

TVL remains at its peak, at $14.2 billion locked, levels not sustained by this particular phase of Ethereum, which has seen a significant increase in value that leads many investors to withdraw their share from the decentralized yield protocols and return to their wallets or traditional property holding instruments.

After closing the second week with the highest closing ever, Bitcoin does not continue the bullish race that has marked the rises of the last weeks but keeps prices above $18,500, where it is consolidating the price before the next attack above $18,950, record levels recorded last Saturday.

At this stage, in order not to cause dangerous dizziness, it is necessary to consolidate for several days with movements that will not see prices fall below $16,600, which coincide with the Fibonacci retracement. It would be a movement that would see a margin of manoeuvre just over 10% from current levels. If this were to happen it would not affect the usual bullish trend that has been characterizing Bitcoin since mid-October.

In the event of a fall below $16,900, levels from where the hedging of derivatives operators in options begins to emerge, the next support base in the medium term is in the $15,700 area.

At the moment it is useful to understand in the next hours and in the next days the strength of the resistance of the current levels, with price in a range between 17,700 and 18,600 dollars, a level that is characterizing the oscillations in these last 48 hours.

In case of a return of the bullish force, which will have to be sustained by a return of the volumes, the breaking of the 19,000 dollars would open space to go attacking the absolute historical highs of mid-December 2017, 19,600 dollars.

In such a context, with a slowdown of the bullish run by Bitcoin, it is good to remain cautious and not anticipate upward movements.

For Ethereum the context is different. The rise from last Thursday’s lows continues. In 5 days ETH has gained more than 30%.

Ethereum recorded yesterday the highest trading day ever, with more than 4 billion euros. With the record of these days, Ethereum finds a further bullish cue that seems similar to what happened last summer, with a rise that in just under three months has seen prices rise by more than 120%. Since the beginning of October, prices have risen by almost 100% with almost a doubling of its value. It is a glorious phase that is only dimmed by Ripple, but it is a signal that brings out ETH.

A similar context also pushes the support levels away. The crucial support in a medium-term perspective passes in the area just above $375, allowing a large margin of movement of over 35%, which increases any speculation by short-term traders. At the moment, only a collapse of over 35% would cancel out what ETH has been building since early September. For Ethereum the danger is far away.

The post Stellar, the price of XLM flies +60% appeared first on The Cryptonomist.