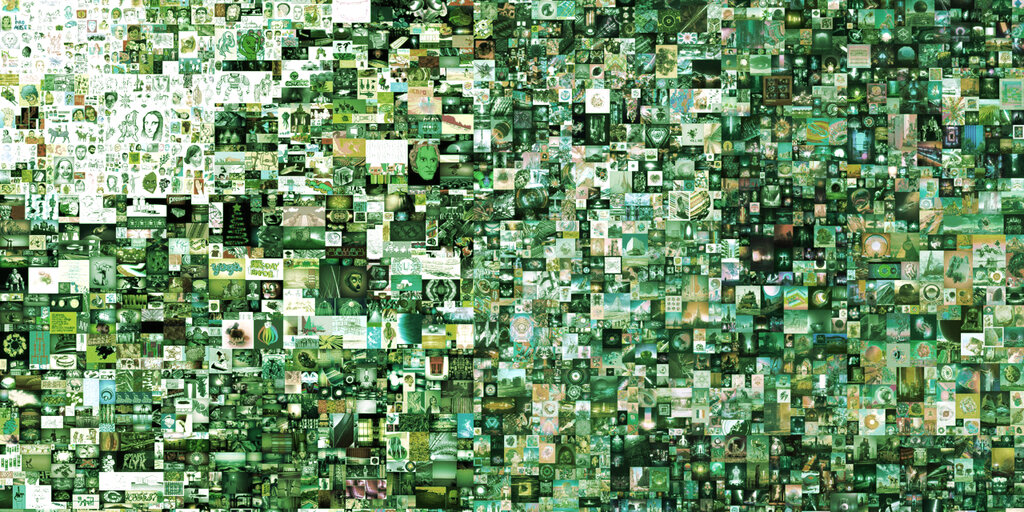 Non-fungible tokens, or NFTs, are changing the way we think about art—and investors are starting to take notice.

In the last year, NFTs have shot to the forefront of the crypto space. The cryptographically-unique tokens make it possible to create real-world scarcity for digital objects, and artists have seized on the opportunity presented by the technology.

2021 has seen a major uptick in interest around NFTs, with Google search interest in the term reaching its highest-ever numbers, and NFT marketplaces like Nifty Gateway and OpenSea clocking in record trading volumes as everyone looks to get to grips with this emerging asset class.

But it’s not just interest that’s increasing. In the last six months, nine of the ten most expensive NFTs of all time were sold, demonstrating serious investor appetite. With that in mind, we take a look at the ten most ridiculously expensive NFTs ever sold, and will leave you to judge their true value.

The NFT represents a collage of 5,000 of Beeple’s earlier artworks, demonstrating his development as an artist over the course of his career.

It was purchased by Vignesh “Metakovan” Sundaresan, who initially remained pseudonymous, but later revealed his identity, explaining that, “The point was to show Indians and people of color that they, too, could be patrons, that crypto was an equalizing power between the West and the Rest, and that the global south was rising.”

The second-highest bidder on the piece was none other than Tron CEO and founder Justin Sun, who bid a whopping $60.2 million before getting sniped at the last second by Sundaresan.

Dylan Field, the CEO of design software company Figma, is behind the sale of the second most expensive NFT in history—CryptoPunk #7804. The NFT sold for a cool 4,200 in 2018, at the time worth $7.5 million.

CryptoPunks are a randomly generated set of 10,000 unique digital characters, and are some of the first examples of non-fungible tokens released on the ETH blockchain.

They were developed by Matt Hall and John Watkinson from American game studio Larva Labs.

Initially given away for free, some CryptoPunks with particularly rare or desirable features—such as the blue-skinned pipe-smoking alien that is CryptoPunk #7804—have gone on to sell for significant sums. This includes CryptoPunk #1651, which sold for a six-figure sum in February.

CROSSROAD is an NFT created by acclaimed digital artist Beeple. It features anti-Trump messaging, and an enlarged Donald Trump-like figure laying in a defeated heap with profanities written across his naked body. It didn’t always look like that, though; the artwork was designed to change based on the outcome of the 2020 election. Had Trump won, it would’ve depicted him wearing a crown and striding through flames.

The #1/1 from beeple's first NG drop has just resold on the secondary market for $6.6 million.

History has just been made.

Congrats to beeple and of course to @pablorfraile for the sale. pic.twitter.com/mTYG4VABSw

Nifty Gateway, a popular marketplace for digital collectibles, brokered the $6.66 million sale of the NFT between its original owner (Twitter user Pablorfraile) and an anonymous buyer.

The NFT was sold just four months after it was initially purchased, at roughly 10x its original price.

The token was minted the token through a platform known as Valuables — which allows users to craft NFTs that represent their tweets.

just setting up my twttr

As part of his philanthropic efforts, Dorsey pledged to immediately convert 100% of the proceeds to BTC before donating it to Africa Response.

The second CryptoPunk on this list (seeing a theme yet?), number #6965 sports a funky fedora and an unimpressed expression. It sold for a not-too-shabby $1.54 million in February.

The CryptoPunk is one of just 24 ape Punks, which is the second rarest Punk type after alien.

The NFT includes a music video and dance track, and entitled the buyer to choose the name of both the original NFT and the open edition NFTs recently sold on Nifty Gateway.

More info about the auction!
Auction winner chooses song name and receives full music video. The auction winner will receive edition #1 of the 9999$ open editions. After the auction has ended, the titles for both the 1/1 and and the OE will change to the title of your choosing. pic.twitter.com/CBBTyqG1Cy

Thought we were done with the CryptoPunks? Not quite. CryptoPunk #4156 is another punk that managed to net more than $1 million in a public auction.

Just like the slightly more expensive CryptoPunk #6965, CryptoPunk #4156 is a rare ape-type token, but instead sports a blue bandana.

According to the Larva Labs website, the average CryptoPunk sold for $25,247 in the last 12 months, making CryptoPunk #4156 worth the equivalent of 51.5 lesser CryptoPunks.

8.Not Forgotten, But Gone: $1 Million

WhIsBe, a contemporary artist in New York City, is the man behind a series of NFTs depicting gummy bears in various creative forms.

Although WhIsBe was originally known for his gummy bear murals throughout Brooklyn and massive statues spread in public spaces throughout the world, he recently turned his artistic talents to the realm of NFT art.

To date, the 16-second video of a rotating gummy bear skeleton called “Not Forgotten, But Gone” is the most expensive NFT created by the artist, and sold for a hefty $1 million on Nifty Gateway.

The NFT features a blue bespectacled creature bopping to one of Aoki’s beats in a 36-second clip.

It sold for $888,888 in a then record-breaking auction for Nifty Gateway and entitles the users to an Infinite Objects physical screen displaying the NFT (provided the owner holds the token for two weeks post auction).

THE COMPLETE MF COLLECTION is another of Beeple’s masterpieces and features a video of all the other artworks sold as part of its collection.

This NFT is unusual in the fact that it is also accompanied by a physical token — in this case, comprised of a signed titanium backplate, a sample of Beeple’s hair, and a certificate of ownership (among other things).

The token was the most expensive single edition token sold in Beeple’s ‘The 2020 Collection’ and was purchased by NFT art collector Tim Kang for $777,777.

2 thoughts on “The 10 Most Expensive NFTs Ever Sold”