It’s here. After months of waiting, Elrond cryptocurrency fans have finally arrived. The CEO of this cryptocurrency announced just a moment ago the date of the launch of a decentralized exchange and the heart of the entire ecosystem – Maiar DEX.

According to the initial plans, we were supposed to have a decentralized exchange Maiar already this summer. However, development was delayed and testing took more time than expected. However, the cryptocurrency CEO Elrond finally announced the long-awaited launch of Maiar DEX on his Twitter – the launch will come in November.

The Maiar DEX is launching in November. 🌕

This launch was preceded by a competition called Battle of Yields, where the prize was $ 100,000. This was the last sharp phase of testing before launch. It was divided into 3 categories – battle of yields, security, community contribution.

The goal of the entire competition was to perform stress tests of the entire system, find possible code errors or bugs that hackers could use in the future and steal resources. The last category was the contribution of the community in similarly different content – useful tools, graphs, statistics and the like.

Will Elrond fly “to the moon”?

Elrond Network is a public blockchain that tries to solve the problem of “blockchain trillema” (scalability, security and decentralization) and, in addition, get as close as possible to its inflation model BTC, which in turn differs quite fundamentally from cryptocurrencies such as Polkadot or ETH. Elrond developers do not even hide the fact that this cryptocurrency is to become “the new digital gold and the main tool of a modern decentralized financial ecosystem.”

It is Maiar DEX that should be the supporting element of the entire ecosystem and basically everything will continue to build on this platform. Many analysts compare the cryptocurrency of Solana to Elrond as equal rivals to the king of the smart Chain himself – ETH. Elrond, whose cryptocurrency EGLD currently has a relatively low market capitalization, leads from this trio from the point of view of potential appreciation.

Just for fun, below you can see what price the cryptocurrency EGLD would have if SOL had matched the market capitalization. 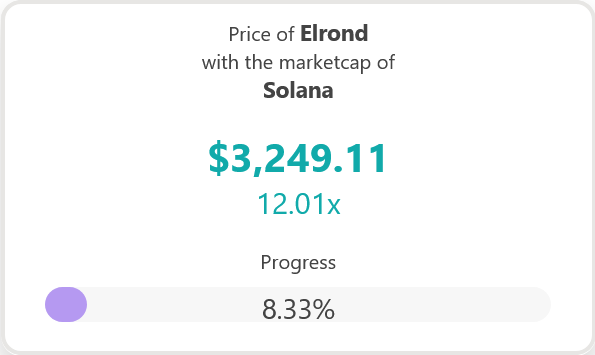 The price of EGLD is around $ 270 at the time of writing, with the current ATH just above $ 300. The launch of Maiar DEX is expected to bring the NFT market in a short sequence, which, given the current trend, could further push its price up and reach the magical limit of $ 1,000 expected by many.