The UK Financial Conduct Authority (FCA) has ruled that all cryptocurrency ATMs are banned from operating in the country. The decision was revealed by the British portal The Telegraph on Friday (11).

Closing of all cryptocurrency ATMs in the UK

As a result, all equipment of the type must be terminated. According to data from Coin ATM Radar, there are 70 cryptocurrency ATMs in the UK currently. Most of them (47) are located in the capital London, one of the largest cities in the world. 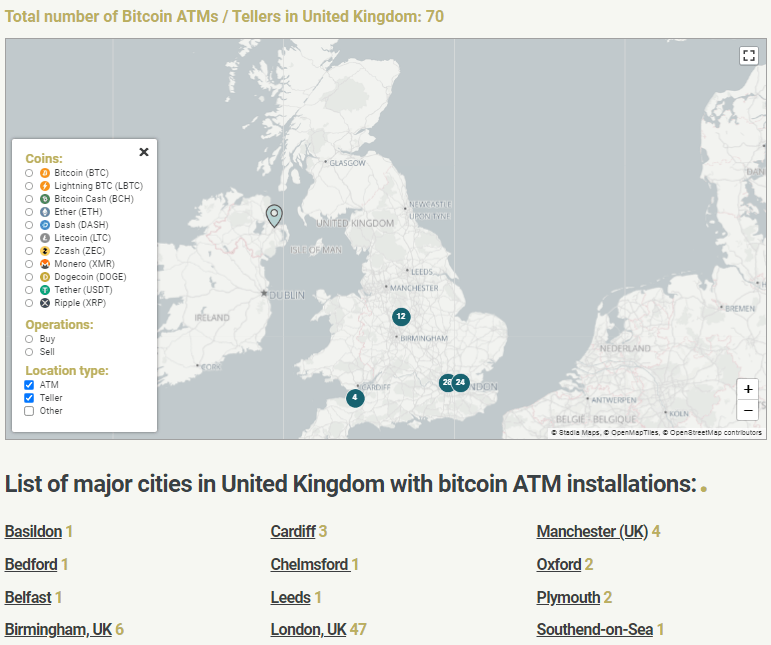 That is, tourists who wish to exchange their cryptocurrencies for pounds will no longer be able to use this equipment. According to the FCA, the companies responsible for the cashiers must close their operations, under penalty of being sued.

As per Coin ATM Radar map, most cashiers operate in convenience stores and supermarkets. They are run by at least eight companies, none of which are licensed by the FCA.

“Cryptocurrency ATMs offering services in the UK must be registered with the FCA and comply with UK money laundering regulations. None of the companies registered with us have been approved to offer this service. Meaning any crypto ATMs in the UK are doing this illegally and consumers should not use them.”

Along with the companies, the stores that host the ATMs were also notified. The content of the communication was the same: ATM must be turned off and removed from stores.

BTC ATMs allow users to deposit money – in this case, sterling pounds – and buy cryptocurrencies. The purchased amount can be placed in a private wallet immediately after the transaction.

According to the FCA, the machines have minimum requirements for background checks, especially for deposits of smaller sums. That is, none of them have procedures to verify the identity of those who are buying cryptocurrencies.

According to the FCA, Brits can buy up to £250 without ID verification. The risk is that someone makes multiple transactions of small amounts, avoiding detection by the authorities.

Thus, the financial authority fears the possibility of ATMs being used for money laundering. Alleging the prevention of this activity, it was decided to banish the cashiers. FCA said:

“We have warned operators of crypto ATMs in the UK to close the machines or face application action.

Anyone who does not comply with the order may be banned from carrying out other financial transactions, as well as receiving fines or criminal prosecution.”

In the UK, there is still no regulation of cryptocurrencies. Companies are not prohibited from operating, but they do need to register with the FCA.

Only 33 companies are fully registered, while 22 are waiting on a temporary list. These will be able to operate in the country until the end of March. However, the FCA has already closed 110 companies that were operating without registration.

“We regularly warn consumers that cryptocurrencies are unregulated, which means people have no protection if things go wrong. So they must be prepared to lose all their money if they choose to invest in them.”

Two of the biggest cryptocurrency ATM operators in the UK are Gidiplus and Gadcet. Gidiplus had its operating license denied by the FCA in 2021 and appealed to British justice. However, the courts upheld the regulator’s decision.

As a result, the company’s ATMs were no longer operational, said Olumide Oskoya, owner of Gidiplus. The businessman said he sold them to a buyer in Eastern Europe, where the rules are less stringent. Several UK companies are doing the same, he said.

Gadcet followed suit and said its tellers were no longer trading cryptocurrencies.

Interestingly, the United Kingdom came to seek the lead in this market, but now seems to have a change of attitude. The CEO of Blockchain.com, the country’s largest cryptocurrency company, criticized the FCA, saying the regulator’s stance meant the UK was falling behind Europe in market innovation.

4 play-to-earn games are standing out for recent announcements