After less than a week, I would like to refocus on gold (XAU / USD), as new inflation data for May have been released. It’s unbelievable, but it turned out that May’s inflation reached a hefty 5%. If you remember, I was quite skeptical that we would see even higher inflation than in April (4.2%).

However, from the behavior of the dollar index and labor market data, it was clear that inflation would be rather higher, but I roughly bet at + 3%. Given that inflation targeting is 2%, it is starting to run out. But the worst part is that the Federal Reserve probably doesn’t worry too much about inflation, because higher inflation was their goal. Somehow he has to get rid of that big debt.

We have before us a chart from the last twelve months, where we can observe a strong growing trend from January this year. Given the trend, we can imply that even in June, there is a good chance that the United States will see inflation above 5%. The biggest bizarre, however, lies in the fact that interest rates are still almost zero.

This is historically unique, because the central bank should keep rates close to the inflation that prevails in the economy. So will the Fed raise rates in a hurry? So far it doesn’t look like that and it will be very interesting to see how they deal with it. However, it is important for us to realize that current policy can be very negative over time consequences – the financial market and the global economy.

Otherwise, gold definitely likes inflation and nothing changes that it should be such an important driver for yellow metal. S tak exorbitant inflation, gold should go seriously up. When the so-called oil shocks, inflation jumped to double digits numbers and yellow metal rose in price by hundreds of percent in a few years.

However, the risk of higher rates can be a problem in return. In the meantime, however, we will build on the Fed’s current policy and the data we have at our disposal. From a fundamental point of view, gold should go up. Otherwise, I would like to point out that in the context of several decades, 5% inflation is nothing extreme. However, the truth is that she was so high for the last time in the 1990s and then in 2008. 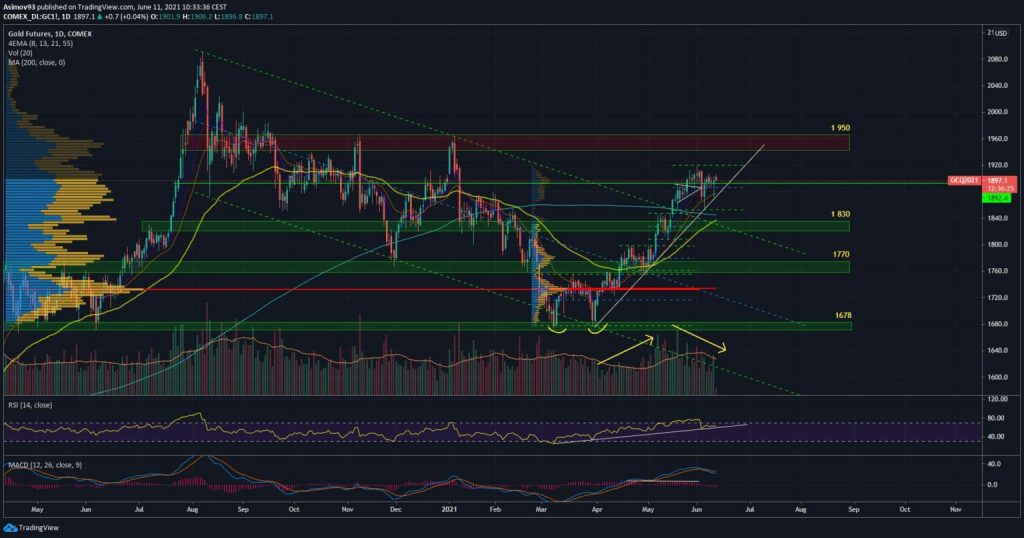 We have the fundamental side of things behind us and now we will focus on the yellow metal from a technical point of view. In fact, we are still in correction, which, however, is more in the form of party consolidation. So a new little one is created market equilibrium (see profile growth structures), which should be followed by a break-up as in the previous three. So for now, everything is going according to plan.

However, it is logically still risk, that correction deepens. Therefore, I remind you that gold should not fall below 1 830 USD / ounce. The course simply must not fall below top wall drawn correction channel, otherwise the whole break would make an impression false movement. So we have absolutely no certainty, something can go wrong at any time.

In any case, volumes are still falling steadily, which really indicates that a small market equilibrium is being generated in the market. The market will gain new strength (reacumulates) and we can meet higher levels again. However, it is necessary to first break through the S / R level of 1,950 USD / ounce. Basically, this is last hurdle which prevents the precious metal from expanding in price.

After all, if you look at the Volume Profile, you will find that above the said resistance they are not no barriers at all. As soon as the shopper breaks the said level, the door will open wide. Then just a few days and we can reach a new historical maximum.

The current values ​​of RSI are about 62 points and especially the curve still follows the trend. However, if the drawn diagonal is broken, there is a risk of a deepening of the price drop within the correction. The bearish cross still applies to the MACD, but the negative momentum has no great power yet. So far, in short, such a weaker cleansing of the market.

Yellow metal is said to be fundamentally fundamental, but it is still true that the higher inflation is rather temporary. That is, it will remain above the relative normal (3%) for a limited time. If the Fed leaves rates at zero, it is clear that they also calculate that inflation is only temporary.

However, if they start to raise rates frantically, something may have gone wrong and they are trying to react in a hurry. That is why we must monitor everything closely. In any case, gold will hopefully please us in the coming months.