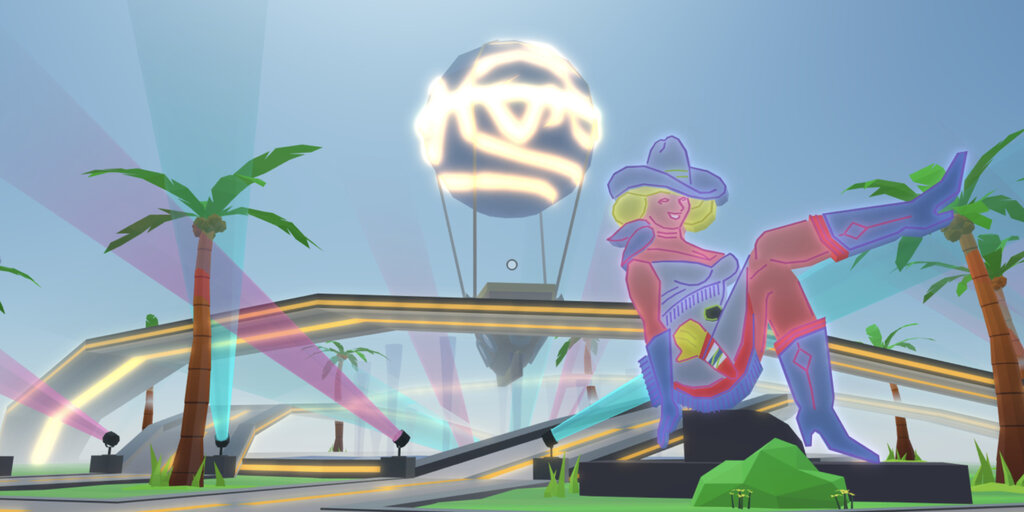 Whether it’s Minecraft, Animal Crossing, or No Man’s Sky, it seems the real world outside just isn’t enough for some people.

The latest in this long line of virtual environments is Decentraland—a 3D world built on blockchain and governed by a decentralized autonomous organization (DAO). It lets you explore and build like Minecraft, and socialize like Second Life—but Decentraland isn’t like other virtual worlds because the users own it. At least, some of them do.

The Decentraland game world is split up into 90,000 units of LAND (a non-fungible token, or NFT), all of which were snapped up when they were originally auctioned off—although there’s a marketplace where people can buy or sell it. Using Decentraland’s MANA cryptocurrency, you can buy in-game items, LAND—or even a snappy name for yourself, if you prefer not to be known as Guest-7b1b3c.

Getting started with Decentraland

You don’t actually need to spend a penny or download a thing to begin exploring Decentraland. The platform is web-based (although it doesn’t yet work on mobile devices), so you can be standing in the middle of Gemini Plaza as a guest user within a couple of minutes.

Visiting Decentraland is simply a case of heading to the Decentraland site, checking a box to confirm you’re of legal age and agree to the T&Cs, and clicking “start exploring”.

Once you’ve arrived in the virtual world, a small flying robot explains the basics, but anyone who’s played a first-person shooter will be familiar with the basic controls: your keyboard’s W, A, S and D buttons control lateral movement, the mouse moves your eyes and the space bar makes you jump. You can also switch between first- and third-person views by pressing V.

Of course, if you want to actually take advantage of the world’s unique selling point—digital ownership—you’ll need to get your hands on some MANA. The cryptocurrency is listed on exchanges such as Binance for trading, but the easiest way to obtain it is to buy it directly using an exchange like Coinbase or Gemini.

You’ll also need to set up a MetaMask wallet in which to store your MANA, enabling you to buy and sell items in the game’s marketplace.

This LAND is your LAND

Virtual ownership doesn’t come cheap. £5 on Gemini got me 67.042276 MANA. On the Decentraland Marketplace, that’s just enough for some creepy eyes or a scary mouth to add to my avatar—customized using a limited but very Nintendo-esque menu system—but just short of the 90 needed for a very snazzy umbrella hat.

Land starts at about 8500 MANA for a single 16mx16m parcel, although you can bid less if you back your haggling skills. Estates, which consist of two or more adjacent parcels of LAND and allow you to build higher, currently start at about 18,000 MANA.

Just like the real thing, the value of each plot depends on how big it is and where in the world it’s positioned, but owners can do what they want with it once it’s theirs. Decentraland has its own web-based Builder tool with a selection of themed Asset Packs (pirates, sci-fi, fantasy, etc), which people can use to construct things for their plots. It’s pretty user-friendly and there’s a decent range of pre-made 3D items to choose from, but you can also choose from a selection of user-created scenes to add to your own creation. The building element is almost an entire game within itself.

This probably explains why a lot of the world feels so similar, although you’ll occasionally get buildings, structures, or monuments that do stand out. Those with the necessary skills can import their own 3D content and build stuff outside of the limitations of Decentraland’s own tools, but those without can also buy more sophisticated creations from third-party platforms such as MetaZone.

Decentraland is big, but feels more like a very large theme park than an entire world, probably due to the lack of variation in the terrain—it’s almost relentlessly flat.

You’re largely left to your own devices, free to explore the grid-based environment at your leisure, but if you can’t be bothered to hike across it there’s an easy-to-read map and teleport system that lets you travel quickly from one place to another. It can take a little while to load, though, and will occasionally crash before you reach your destination—not an ideal quality for any mode of transport.

Even with the draw distance set to maximum, Decentraland is plagued with pop-up—which makes more organic exploration difficult. Buildings don’t appear until you’re very close, so there’s no chance of spotting something interesting in the distance, setting off to find out what it is and getting distracted by other landmarks on the way like you would in other sandbox games.

Much of what you will encounter in Decentraland is nothing more than decorative, albeit sometimes pretty cool—a life-size dinosaur skeleton, a large floating pyramid, a passable recreation of the castle from Mario 64—but there are also vast expanses of flat, empty greenery.

The majority of stuff you can interact with tends to be basic and buggy, which is perhaps unsurprising considering the DIY nature of the place. After the Flood—Two Towers is a Monument Valley-style maze without the charm; by the time choose-your-own-adventure game The Walk’s unreadable overlapping text makes me quit it tells me I’ve used six of my three lives; and while the stadium in which you’ll find football game Moonshot looks quite cool, the mechanics make Pac-Man seem sophisticated, plus it’s no fun to play on your own.

In fact, that’s the overriding feeling you get from spending time in Decentraland: loneliness. Apart from the small handful of other people you spawn with it’s very rare to encounter another human player—and when you do there’s no interaction. There’s a list of events on the Decentraland website that might attract a few more users at the advertised times but it’s hardly a packed schedule. I dropped in on two and found only one other guest.

It’s hard to imagine that this is what Decentraland’s creators had in mind for it, but in a world where virtual spaces have become more important to us all, it feels like wasted potential.

There’s nothing here that you can imagine more casual visitors rushing back for, so while it delivers on the central promise of a decentralized world that’s not under the control of any single person or power, a lack of purpose and direction currently seems to be its biggest downfall. So far, though, it does appear to be mercifully free of Nazis, which is more than can be said for some other more mainstream online communities.

The most intriguing buildings in Decentraland tend to be the digital art galleries, such as MakersPlace, which has an exhibition by Argentinian comic artist José Delbo, and Chateau Satoshi, a fully functioning casino. It’s possible to see a future where Decentraland becomes a kind of VR Vegas, particularly for people in countries where gambling is strictly controlled, although as it stands it’s too limited graphically to be a particularly engrossing virtual reality experience, even on the highest settings.

Much like the real Vegas, it feels like you need to spend money to have any real fun—and in that sense, it’s also a lot like any other real-world theme park. But theme parks are all about escapism—and while Decentraland might be free from coronavirus, climate change, and death, it has a long way to go before it feels like somewhere you’d want to spend much time.