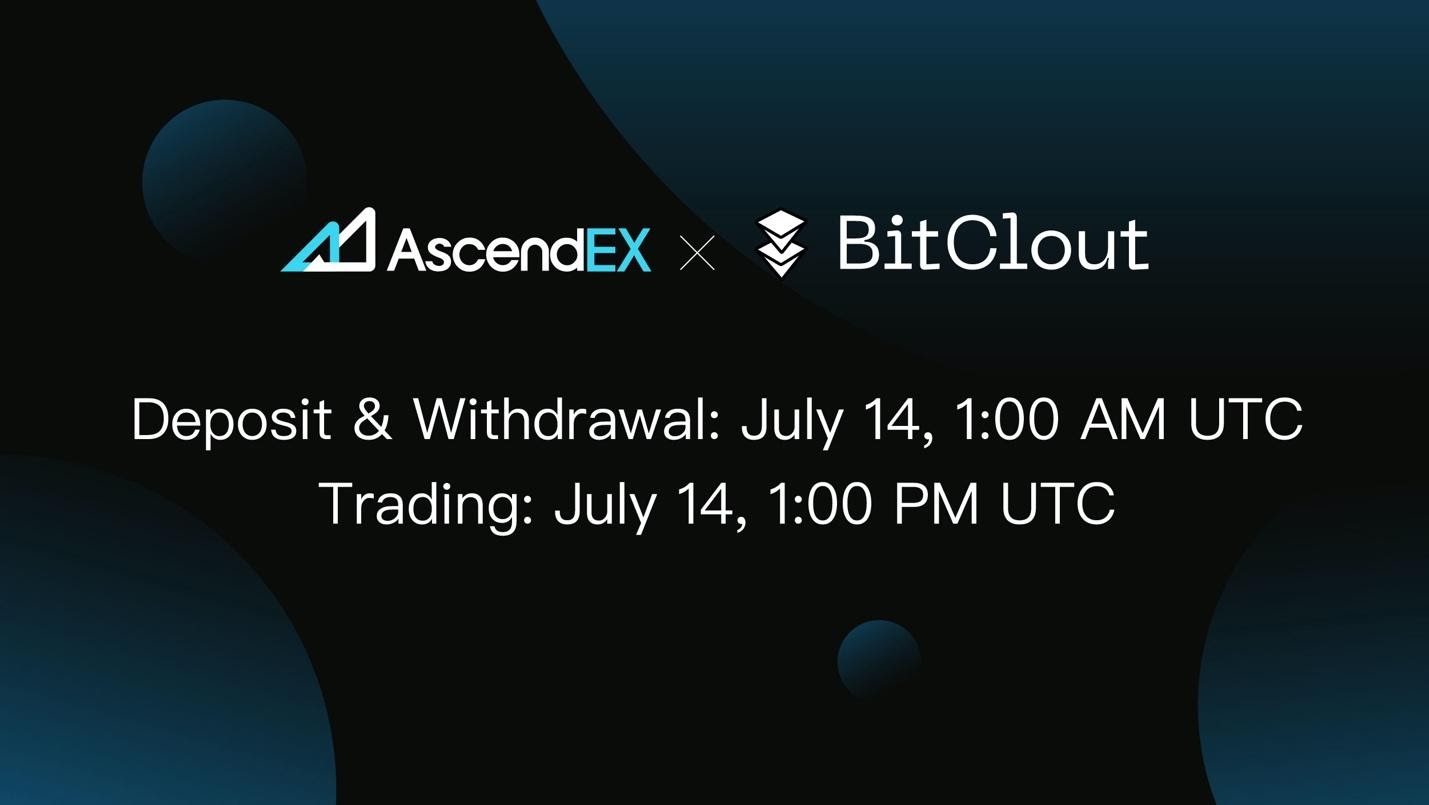 AscendEX, a global cryptocurrency financial platform with a comprehensive product suite, is excited to announce the listing of the BitClout token (clout) on July 14 at 1 p.m. UTC.

BitClout is the first social network built with its own custom blockchain as its foundation. This new type of social network allows any creator to have their own token that their followers can buy and sell.

BitClout is a token-based marketplace for shares in someone’s (or something’s) reputation and influence. If an influencer goes viral on Instagram for something delightful, their token will appreciate in value.

If an influencer says something inappropriate on Twitter, it could hurt the value of their token.

In theory, every public action from anyone makes the creator token’s price subject to fluctuation and thus is tradable on the marketplace.

“BitClout is a disruptor to the status quo of cryptocurrency and social media, and it’s just getting started,” said Shaun Maguire, partner at Sequoia, an early investor of BitClout. “We’re thrilled to have AscendEx’s support of BitClout, enabling the world to trade $clout and join this radically different type of social network.”

“BitClout is about individuals taking ownership of the media they create,” said Andy Artz, partner at Social Capital. “By delivering an open protocol for decentralized social networks, BitClout is the aggregation of coins and code designed to create the first true open marketplace for ideas. By partnering with AscendEX, BitClout isn’t the only one continuing growth; the creators are.”

“BitClout has attracted a huge ecosystem of 120+ new development projects and companies building on top of it,” said Johnny Steindorff, partner at Distributed Global. “As a decentralized, open-source and creator-focused network, BitClout has the potential to grow into the leading WEB3 social network layer 1.”

Today, a post submitted to a traditional social media platform belongs to a corporation, rather than the creator who posted it. In contrast, BitClout is a fully open-source, decentralized project with no company behind it- it’s just tokens and code.

This means every creator has a direct relationship with their followers without intermediaries, which unlocks new ways to engage and monetize that aren’t based on ads.

BitClout’s architecture is similar to BTC, except it can support additional features and complex social network data like posts, profiles, followers, speculation features, and much more with significantly higher throughput and scale.

The BitClout blockchain has its own native cryptocurrency, called BitClout (clout) that users can leverage to do all kinds of things on the platform, including buying “creator coins.” Anyone can buy the BitClout cryptocurrency with BTC in minutes through the app’s built-in decentralized “atomic swap” mechanism, available on the “Buy BitClout” page.

The number of clout tokens in circulation is capped at about 10.8 million, roughly half that of BTC, making it naturally scarce.

BitClout’s lead creator and architect, pseudonymously known as @diamondhands, is a part of a group of developers who created the BitClout blockchain with the intent of turning it into an enduring positive force for humanity that can bring competition and innovation back to the internet.

AscendEX (formerly BitMax) is a global cryptocurrency financial platform with a comprehensive product suite including spot, margin, and futures trading, wallet services, and staking support for over 150 blockchain projects such as BTC, ether, and ripple.

AscendEX has emerged as a leading platform by ROI on its “initial exchange offerings” by supporting some of the industry’s most innovative projects from the DeFi ecosystem such as Thorchain, xDai Stake, and Serum.

AscendEX users receive exclusive access to token airdrops and the ability to purchase tokens at the earliest possible stage.

To learn more about how AscendEX is leveraging best practices from both Wall Street and the cryptocurrency ecosystem to bring the best altcoins to its users, please visit www.AscendEX.com.