The ETH network experienced a record load! The charges were 150 times higher than usual for several hours, the Etherscan even dropped out. It was the minting of lands into the most famous NFT collection. Those who did it made a decent living.

The Otherdeeds mint took place at saturday night, with Otherdeed NFT generally assumed to represent land in the Otherside Metaverse. It was only possible to mint in ApeCoin (APE) and until recently it was not known what their real price would be. This has raised the price of APE in recent weeks to record levels. Otherside is the highly anticipated world of Metaverse, which will include displaying the brands of various most famous NFTs, most notably the Bored Ape Yacht Club, but also Meebits, Cool Cats, CryptoPunks and more. The project was developed by Yuga Labs in collaboration with Animoca Brands, who is behind the popular but still unreleased Metaverse game, The Sandbox.

These plots were minted at a fixed price of 305 APE, although the project was originally planned to be launched through a Dutch auction. However, this plan was eventually abandoned in order to avoid a “war of historic proportions in terms of transaction fees”. However, the mint itself caused exactly what the developers did not want. In a few hours, the network consumed more than $ 177 million in gas fees, and there was such a demand for the NFT that at one point Etherscan stopped working altogether.

Mint fees ranged from 2-4 ETH if you wanted to be successful. The transaction in the image below took 47 minutes to complete! Just to better understand the fees, the classic ETH transaction between two wallets, which usually costs around $ 2-3, cost $ 300 to $ 400 at low priority at this time. 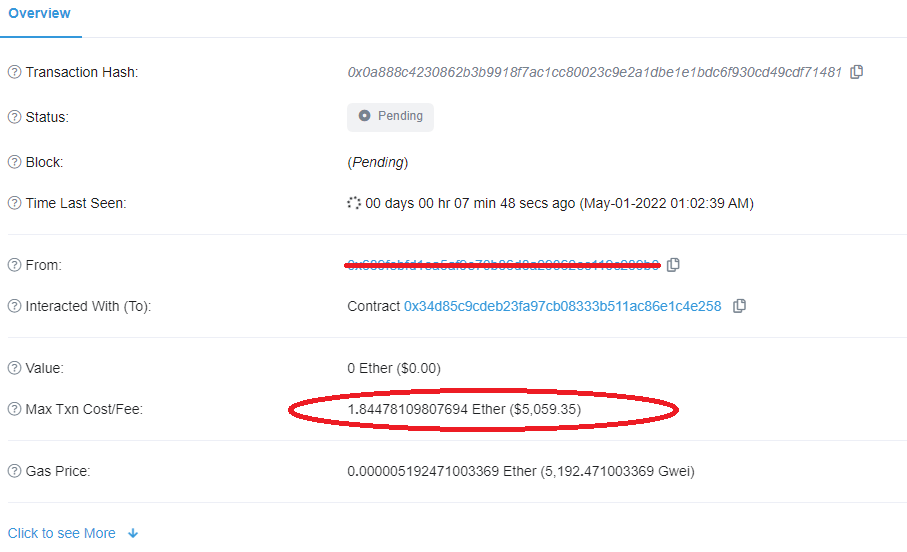 However, there were almost 100,000 transactions on the network, many of which, of course, failed because they did not set a high enough fee. If your NFT transaction fails due to the NFT being sold out, the fee will still be irretrievably burned. However, the creators of Yuga Labs made a big gesture when they promised a refund to all failed transactions.

We are aware that some users had failed transactions due to the incredible demand being forced through ETH’s bottleneck. For those of you affected, we appreciate your willingness to build alongside us – know that we’ve got your back and will be refunding your gas.

During the minute, the price of land fell to 4.7 ETH per piece. At the time of writing, the price is at 8.5 ETH and is still rising. In the case of two plots, a mint came out with a fee of about 6 ETH, so you would currently have 17 ETH.

This is just another example of the strength of the NFT market itself, and that with the effort and study of the NFT, you can profit relatively easily and decently, even if all world markets, including cryptocurrencies, are declining.