After a very negative week, the cryptocurrency market fell again. According to the trader known as Capo, the risk of further declines is greater especially for Ethereum (ETH) and Cardano (ADA), which can fall by up to 50%.

The trader carried out a series of projections based on the current price of cryptocurrencies. According to these projections, both cryptocurrencies have failed to break through resistance and continue on the rise. As a result, they are ready to face severe corrections.

In addition to weaknesses in ETH and ADA, Capo also identified weaknesses in Fantom (FTM) and BTC. In the case of the largest cryptocurrency on the market, the trader predicted a possible market bottom of up to $23,000.

ETH and ADA at risk

In the case of ETH, for example, its price has failed to reach the $3k resistance and has already lost 8.6% of its value in seven days.

Quoted at US$2,600, Capo estimates that ETH could be adjusted to US$1,400. In this scenario, ETH would rise again after reaching support, but the projected drop reaches 46% in this period.

The ADA case is even more emblematic, as the cryptocurrency has tested the $1.08 support on at least four occasions. On the fifth attempt, the price finally broke the support and is currently quoted at $0.97.

With the price below that support, the ADA has opened its way to fall until it reaches the next support, which Capo claims is $0.50. That is, such a move could lead to a correction of 48.4% in the coming days. 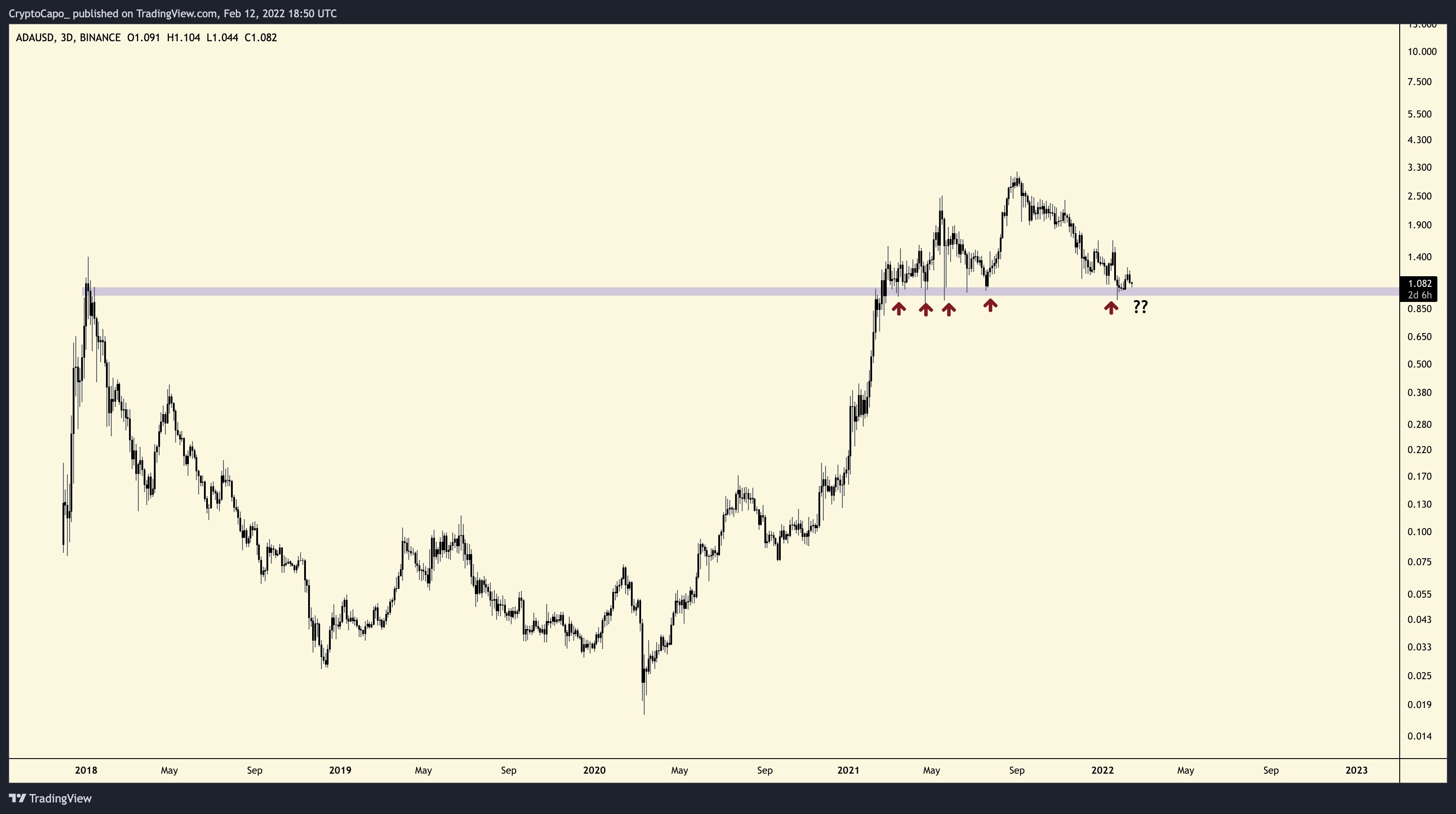 On the other hand, the ADA’s long-term expectations are positive, with analysts predicting an appreciation of more than 400% in 2022. In this sense, analysts predict that the ADA will close the year at almost $3.

ETH and ADA are not the only targets for Capo, who is also eyeing FTM and BTC prices. In the first case, the FTM – which is quoted at $1.69 at the time of writing – has validated its downtrend.

Now, the price is expected to look for the next support located at $0.95. In this scenario, the drop could reach 43.7% before reaching support.

As for BTC, Capo warns that the leading cryptocurrency is showing limited demand at the moment. With lower demand, the price tends to fall even further.

“So after 40k, next support and pivot level is 30k, but that support has been tested many times and it’s weak, so if we see a dump to that level I don’t think it will hold. Below 30k it goes to 21k-23k.” says Capo.

This means that, based on the current price, BTC could still experience a correction of up to 46% and return to the same levels as at the end of 2020.