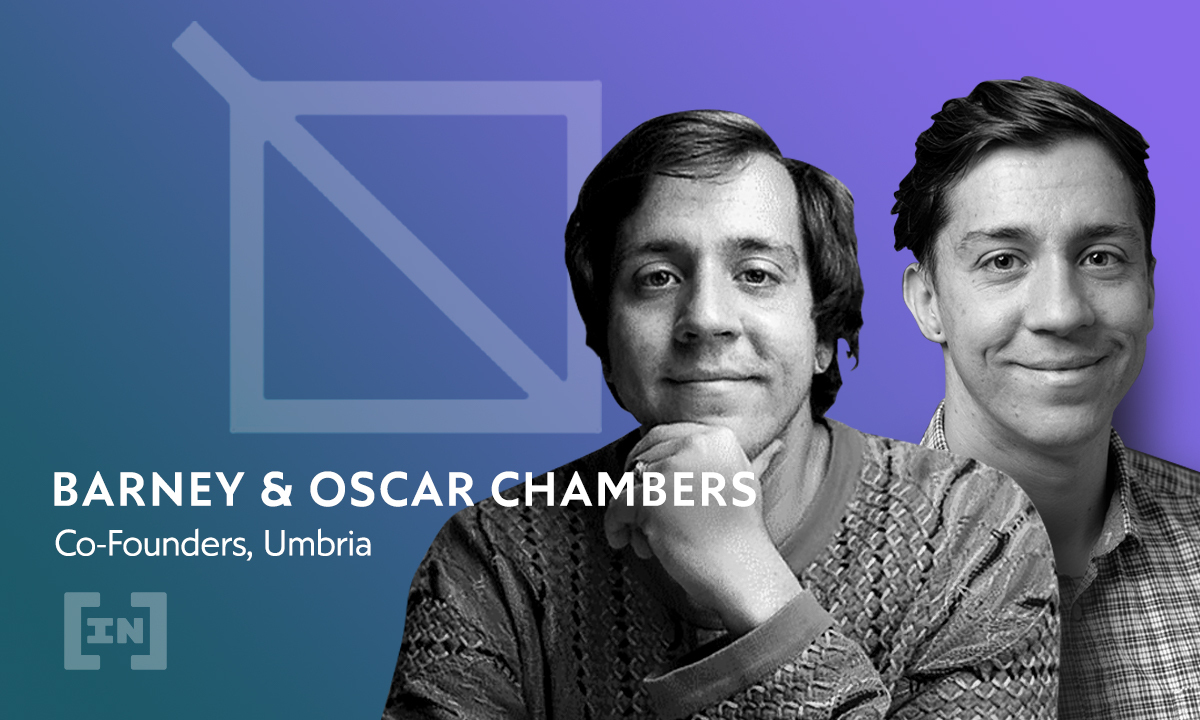 BeinCrypto spoke to Oscar Chambers, one of the founders of Umbria. He dives into the DeFi platform, how he came to DeFi and moving to crypto interoperability.

DeFi solutions are everywhere. Each protocol and project is addressing issues and building on resources to further this impressive decentralized project.

Two such innovators are Barney and Oscar Chambers, twin brothers with interest in cryptocurrency and software. The two founded Umbria in response to the congestion issue on ETH. They aim to make DeFi easier and cheaper to use.

“I’ve always been interested in software. Me and my brother, my twin brother worked in software together, and we’ve always done that ever since we were little kids,” explains Chambers.

In addition to their own interest, the twin’s work doesn’t stray far from the family business. Their father, Clem Chambers, is the CEO of ADVFN. Alongside being a CEO, he is also a journalist and author.

“I would definitely say that was very inspiring for me growing up. He’s always been very interested in software and creating software businesses, which is sort of what got me and my brother into writing software in the beginning.”

“Then once we sort of finished our degrees and scale it up to the level where we could make something practical, we all decided to work together on finance software, and we’ve been doing that for a few years now,” he says.

For the twins, watching the rise of DeFi brought an opportunity to make this arena more practical for the end-user. They specifically focused on making DeFi usable again once the costs created a significant barrier to entry.

“We thought, well, why don’t we migrate a lot of this great technology onto Layer 2 so that it can become usable again? And it seemed like sort of a natural progression that needed to happen. So we took on that challenge, and we’ve been creating DeFi products ever since, “Chambers explains.

A recent project by the Umbria team is their Narni Bridge. Chambers explains that the explosion in Layer 2 solutions is fantastic. However, it has resulted in siloed protocols that can’t talk to each other.

“So the term that people use for that is interoperability. Being able to make all these different crypto networks talk to each other so that we can have sort of one unified crypto space. That’s what Umbria is trying to do right now. Where we’re creating something called the Umbria Narni Bridge, which will enable people to move their assets between all these various cryptocurrency networks that wouldn’t normally be able to talk to each other and move all the assets across very quickly, very cheaply.”

The name for the bridge comes from the Bridge of Augustus. Much like this Roman arch bridge carried the Falmingway in the Italian city of Narni, so will this bridge carry assets across networks.

The Umbria project has partnered with Polygon, one of the biggest names in DeFi. Chambers explains that they received grants and had support from their fellow DeFi protocol.

“But on a technological level, Polygon has made all of the things that you can do on ETH possible. For like three or four orders of magnitude cheaper and faster. They have a way quicker block time and so they can handle a lot more rapid applications. They have a lot more capability of doing multiple transactions over a short period of time, because it’s so much cheaper as well.”

Crypto adoption growing out of necessity

For Chambers, easier adoption extends beyond the individual as well. He sees the benefit of cryptocurrencies for developing countries, and this benefit could spur greater adoption.

“I think you see a lot of developing countries that don’t have a great deal of good financial infrastructure adopting this kind of stuff, all this kind of cryptocurrency stuff more readily, just because of the necessity that there are some countries that have been using phone credit as a currency, for example.”

“And so now that we have all of these crypto applications on our mobile phones and mobile phones are sort of widespread even through developing countries. It’s a new mechanism for people to interact with their own finances,” he says.

However, for developed countries, Chambers sees a slower uptake because of strong legacy finance structures.

“So I think in countries like Germany or countries, anywhere in Europe, or maybe in America and UK, I think because they have such robust integrated financial systems, it’s going to take a lot longer for people to make a switch over to DeFi.”

“I don’t really look at DeFi as a replacement for the current financial system, particularly in the short term. It’s really just filling little pockets that weren’t sort of possible before. So we do have already very strongly integrated financial systems today. But because they’re so well, and there’s such sort of long legacy of these systems like banking, they’re so bloated. They actually cannot perform as well as DeFi in a lot of areas like moving funds around the place, for example,” he says.

DeFi and crypto into the future

Despite the slower uptake in more developed regions, Chambers sees the current excitement in crypto and DeFi as just the beginning on the road to mass adoption.

“I think I look back to the internet boom, the .com boom, and that was something there was a lot of excitement that happened overnight, but then after sort of the initial explosion of interest, and then it all died down a little bit. Over the next 10, 15 years, that’s when we’ve seen sort of mass adoption of the internet happened in our lives,” he says.

In terms of his own work, Chambers explains that this long-term outlook is at the centre of Umbria’s plans.

“The plan with Umbria isn’t just to have a big crazy firework and have lots of people come in a lot of action in the beginning and then sort of the whole thing dies down. So we’re taking a very steady approach, low-risk approach, building community and sort of planning for the long-term rather than just a short couple of years time.”