When the air was filled with the smell of freshly fried burgers, the glasses rattled at the bar and the latest developments in crypto space were whispered about, then you were a guest in “Room 77”. The bar was considered a gathering place for free spirits and revolutionaries who wanted to change the world with their ideas.

However, the pub gained notoriety primarily as one of the first BTC acceptance points. Owner Jörg Platzer decided to take this step back in 2011 in order to promote the spread of the digital currency. In an interview with BTC expert Anita Posch, he explained his motives:

Back then I wanted to own BTC. I’m a little embarrassed, but I’ve failed to mine several times. Then I just had the idea of ​​putting up a sign telling people that we accept BTC.

The first real BTC transaction is said to have been completed in May 2011, Platzer recalled in an interview. For a beer, a guest put 1 BTC on the virtual counter – today’s equivalent: around 30,000 euros.

And at least in the neighborhood, Platzer found success when local businesses joined the payments network. The capital’s first “BTC neighborhood” grew up and subsequently attracted crypto celebrities. For example, BTC advocate Andreas Antonopoulos is said to have been a welcome guest and even persuaded the owner of a nearby ice cream parlor to adopt BTC.

Jeff Gallas also frequented the bar. Opposite to time online remembers the founder of the Lightning service fulmo to the early days of the restaurant.

At first we just sat with a few people. The higher the BTC price rose, the more came.

The increasing popularity finally helped Room 77 to get a place in the Berlin travel guide. As a result, more and more tourists flocked to the “crypto bar”. And one or two journalists also visited the premises to report on the “BTC phenomenon”.

“I believe in honest money”

However, the interior of the restaurant was not only characterized by good food and
cold drinks. Room 77 also made every effort to make its (financial) political point of view clear – the pursuit of the greatest possible freedom. 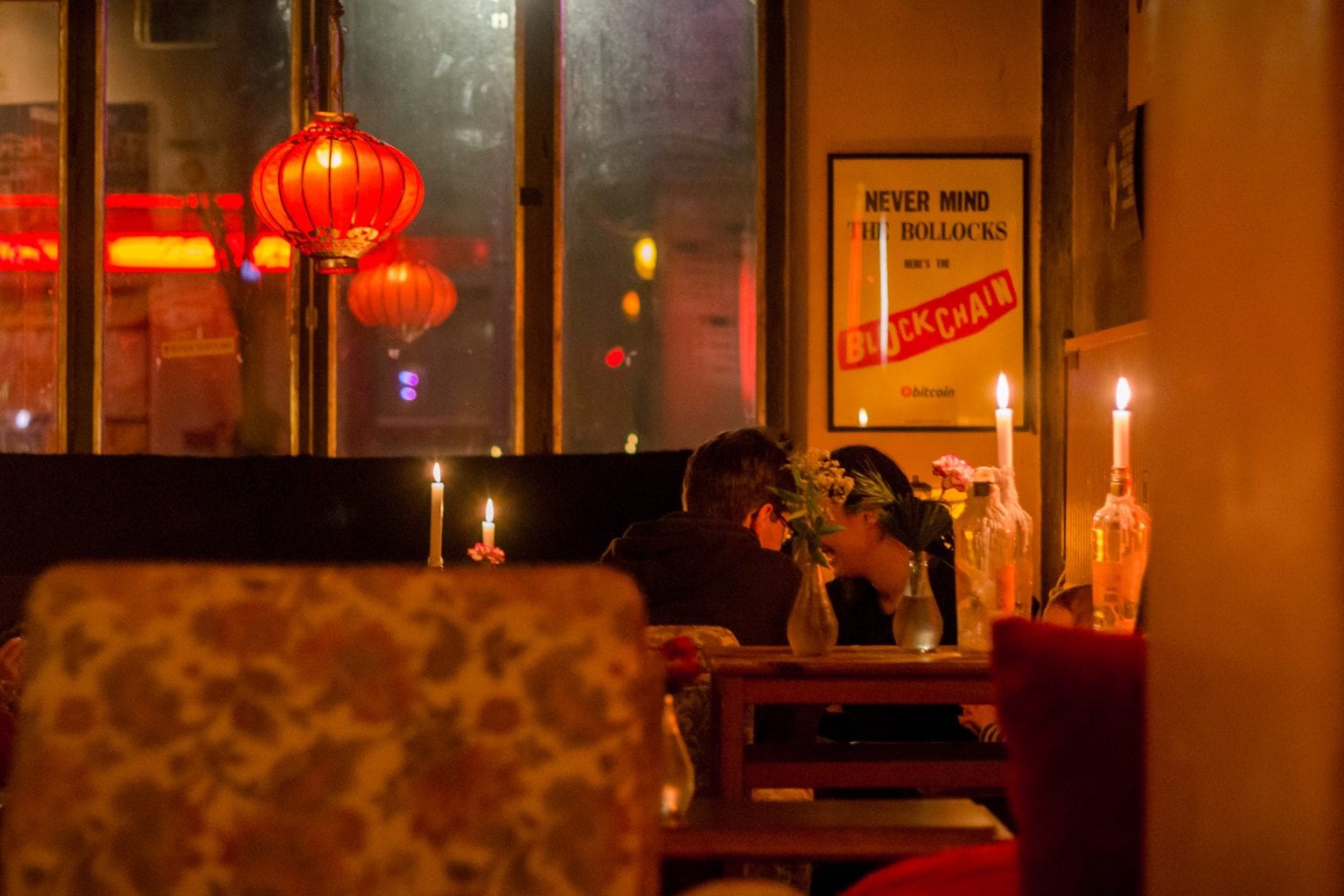 The subdued light created a cozy atmosphere in the BTC bar.

The bar featured a sign that read: “I believe in honest money: gold, silver and BTC”

The interior of Room 77 was covered with posters and messages.

So it is not surprising that there were stickers with Edward Snowden’s face on the tables or numerous posters hanging on the wall calling for the release of Wikileaks founder Julian Assange or Silk Road mastermind Ross Ulbricht.

The bar also did not shy away from denouncing its clear image of the enemy – the fiat money system. Sayings like: “I believe in honest money: gold, silver and BTC” or “The debt is over” contributed to the special atmosphere at the pub.

But all the charm and flair didn’t help Room 77 in the end. In October 2020, Jörg Platzer announced the closure on Reddit. Inspired by Douglas Adams’ The Hitchhiker’s Guide to the Galaxy, the owner considered his mission accomplished and could now return to his home planet.

Once a civilization has developed a planetary specie system, it usually doesn’t take long for its members to become peaceful and put their resources into developing longevity and space travel rather than governments and weapons.

Healthy money on a global scale will soon make it impossible to wage wars and create economic equality among humanity. We estimate that it will take you less than another century to ascend and join the intergalactic community.

Although the kitchen in Room 77 has remained cold since the announcement, rumors have bubbled up on social networks. On Twitter, for example, Jon Matonis, chief economist at Cypherpunk Holding, suspected the corona pandemic and the rampant gentrification of the capital as the reasons for the closure.

Both are wrong, says Jörg Platzer. The closure was fixed weeks before the government measures to contain the number of infections. Even monetary reasons would not have brought the BTC bar to its knees. Platzer admits that the business was not profitable even before Corona. The actual motive behind the closure was the rejection of “surveillance measures” such as contact tracing.

Now the premises are deserted, the counter emptied. The sign with the distinctive declaration of war against the fiat money system is no longer hanging where it was once indispensable. Although the bar has gone down in the annals of crypto history and its founder has started his (intergalactic) journey home, one thing has remained in Room 77 – the legendary reputation as the first BTC bar in Berlin.

Games Is Important Part in Our Life

Oil, Nigeria’s Economy And The Future

Which is the Best Watch on the Planet? We Sure Think Its the Planet Ocean Watch!