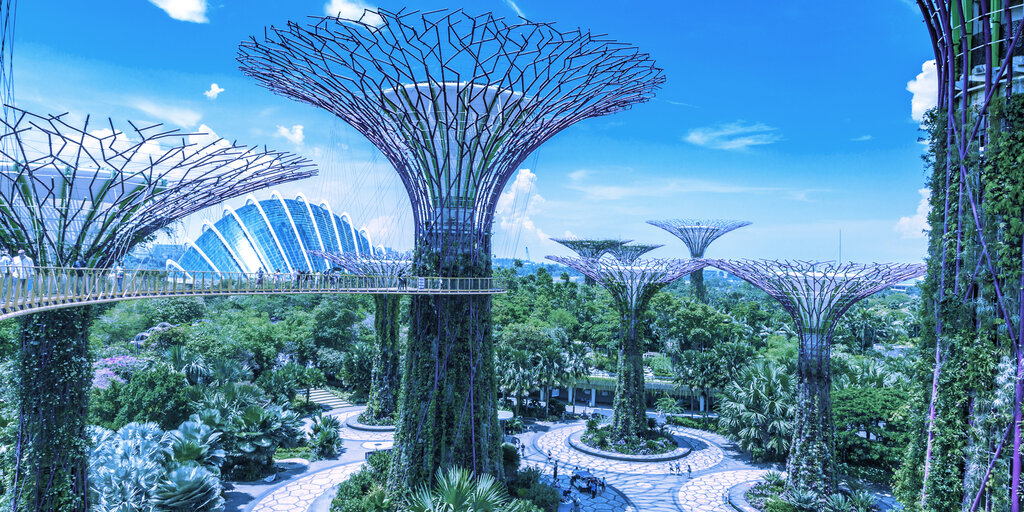 It’s easy to see why crypto luminaries including ETH co-founder Vitalik Buterin, Binance founder Changpeng Zhao and Metakovan—owner of the world’s most expensive NFT—have made Singapore their base. The city-state has a lot going for it.

On the surface, it’s a calm, futuristic fantasy of a place, characterized by the colorful, otherworldly feel of the Marina Bay Sands resort. Venture closer and Singapore proves to be full of technological wizardry. It’s a ‘sensor city’ with smart initiatives to promote better living, health and mobility, omelette-making robots, smart homes, and fintech innovation galore, all underpinned by a highly-educated, service-focused populace, and a government that fronts the worldwide drive towards digitization.

KPMG, one of the ‘big-four’ consultancies, this week gave Singapore the top spot in its global ranking of tech hubs outside Silicon Valley—for the second time in two years. But that’s no surprise to crypto firms that have long valued its pragmatic approach to regulation and its liberal taxation policies—particularly as regulators zero in on unregulated crypto activity elsewhere.

“Within the region, Singapore has taken on a comparatively more neutral approach to crypto, acknowledging its potential benefits and encouraging innovation and experimentation in the space,” Julian Hosp, founder of Cake DeFi, a business based in the city-state, told Decrypt.

But as Singapore’s Blockchain Week kicks off, just how crypto-friendly is the city state, and how long will its liberal stance last?

“Singa Pura,” the “Lion City,” has seen a remarkable transformation over the past 60 years, from a former British colony with severe unemployment and a housing crisis, to one of the world’s most prosperous nations.

“A lot of crypto platforms have decided that Singapore is going to be a very important place.”

A massive modernization programme, throughout the 60’s and 70’s, is at the root of Singapore’s success. But, most recently, thanks to China’s increasingly aggressive stance towards Hong Kong, the city-state is emerging as Asia’s new financial powerhouse, with around 40% of Southeast Asian fintech companies based there—including an increasing number of crypto startups.

Singapore first became a crypto hub during the early days of 2018’s ICO boom. But the nation’s financial institutions have also embraced blockchain; its largest bank, DBS, launched a digital exchange in 2020, and its trading volumes increased nearly tenfold over the first quarter of 2021. It completed a $1 billion digital bond issue in May.

“A lot of crypto platforms have decided that Singapore is going to be a very important place. It’s one of the more forward-thinking, the regulators have a well-thought-out framework in place. I think having that clarity is very important,” Jeremy Ng, managing director of Gemini Pacific Asia, told Decrypt.

The US exchange, founded by the Winklevoss twins, is seeking licenses in Singapore. It already has licenses in New York and the UK, as well as smaller jurisdictions.

Ng said Singapore would be used as a base to expand further into the continent, “to service both our retail and institutional clients across the whole Asia Pacific, including Australia.” With that in mind, Gemini is looking to increase its headcount in the city from 30 to 50 by the end of the year.

Singapore as a crypto incubator

Singapore ranks second in the world for doing business, just behind New Zealand, according to the World Bank; 80 of the world’s 100 biggest companies have a presence there.

Crypto companies have been encouraged to take up residence, too, drawn by the state’s friendly regulatory environment—standing in direct contrast to the increasingly hostile reception afforded to many crypto firms in Hong Kong, London and Washington.

However, the cryptocurrency market in Singapore is still relatively small. The combined peak daily trading volumes for Singapore’s top three cryptocurrencies is only 2% of the city state’s daily trade in securities, according to Chia Hock Lai, chair of the Blockchain Association of Singapore. He added that cryptocurrencies made up less than 0.01% of the assets in funds managed by MAS-regulated fund managers.

Singapore has been generous with its funding for fintech. Some S$300 million ($219 million) has been earmarked to develop deeptech projects—those that use new technologies to change lives. And the government has provided S$12 million ($8.7 million) to accelerate blockchain innovation.

The city-state prides itself on the multitude and quality of its tech incubators, and its success in fostering cutting-edge innovation.

Take central bank digital currencies (CBDCs.) They were invented by Singaporean blockchain engineer U-Zyn Chua, co-founder of DeFiChain. He developed the world’s first CBDC, the Sand Dollar, for the central bank of the Bahamas.

Today, around 90% of central banks around the world are working on a digital currency. In June, an initiative, the Global CBDC Challenge, was launched by Singapore’s financial regulator, the Monetary Authority of Singapore (MAS,) alongside the IMF, World Bank, and others. The project’s goal is to encourage innovation and real-life applications of CBDCs in payments.

Singapore is also working with the Bank of International Settlements (BIS) on Project Dunbar, an initiative to explore governance and connectivity for cross-border transactions using multi-CBDCs that would form the basis of a future international settlement network.

MAS makes up its mind

However, MAS has yet to issue any licenses to cryptocurrency companies, despite more than 300 applying. Until it does, exemptions have been granted to some of the industry’s biggest players—meaning they can serve local retail and institutional investors, although there are some limits on transactions, and the services they can provide.

Binance founder Changpeng Zhao is a Singapore resident and the company is currently listing 230 Singapore-based job vacancies on LinkedIn.

Currently, Binance users in Singapore have limited options, they can only trade eight cryptocurrencies, and other features including derivatives trading are not permitted.

Binance has been the focus of attention from regulators in the UK, Italy and Japan in recent weeks. The Singapore authorities have indicated that actions taken by other states will be considered alongside other factors, such as the exchange’s anti-money-laundering controls, when MAS makes its licensing decision. If the regulators decide against it, Binance stands to lose its exempt status.

“We are aware of the actions taken by other regulatory authorities against Binance and will follow up as appropriate,” the authority said in a statement.

A home for tech titans

ETH co-founder Vitalik Buterin has been resident in Singapore since summer 2020, his father Dmitri Buterin told Decrypt in February.

“He likes Asia. Singapore is a nice place. There are lots of activities in Asia around crypto—a big ETH community [and] the ETH Foundation has people in Singapore—so it’s a very comfortable place for him to be,” said Buterin senior.

Recently, it appears that other tech titans have cottoned on too, with reports surfacing of increasing numbers of startups seeing the attractions of Singapore, in response to toughening regulations in many parts of the world. In Hong Kong, for example, new legislation would limit trading to accredited investors.

According to the MAS, there has been no uptick in license applications from startups as a result of actions overseas. But Chia Hock Lai, chair of the Blockchain Association of Singapore, told the Financial Times that there were a number of Hong Kong-based players establishing offices in the city.

However Gemini’s Ng disgarees. “We have seen a lot of the Chinese founders of exchanges, like Binance and Bybit’s co-founders, move over to Singapore,” he said. But he’s seen no discernible migration from Hong Kong yet. Since legislation is still on the table, “people are still maybe taking the next few months to assess the situation,” he said.

MAS is expected to begin issuing licenses to cryptocurrency operations this year, a process that began with the introduction of the Payment Services Act in January 2020.

But this is not the first time a nation has sought to lure the crypto industry with the promise of favorable regulatory conditions. In 2018, the island nation of Malta took a similar approach, billing its crypto regulations as the most innovative in the world and attracting thousands of crypto startups—including Binance—to “Blockchain Island.”

Ultimately, Malta’s licenses failed to materialize; a mere handful were issued after a long delay, and the country’s regulations have since proved more stringent than most. A mass crypto exodus from the island followed.

“Being regulated in Singapore is the gold standard.”

But Singapore is not Malta. “Being regulated in Singapore is the gold standard, just like if you’re regulated in New York State versus the other states,” said Gemini’s Ng. “If it’s Singapore, I think most of the institutions or retail clients will give a lot of credit to that.”

Singapore, however, is not devoid of illegal operations. After a recent crackdown on one alleged racket in Hong Kong, the authorities there revealed that 60% of the funds concerned had been funneled through accounts in Singapore, and enlisted the help of authorities in the city-state to track the final recipients of the funds.

And a scandal closer to home involved online cryptocurrency trading platform Torque, run by Singaporean businessman Bernard Ong. The company went bust, with investors claiming millions lost, and has led to increased scrutiny of the industry, according to Cake’s Julian Hosp.

But, more broadly, Singapore’s approach is proving effective, as investment is pouring in. Fintech investment has risen from around $20 million in 2014 to over a billion in 2020, Sopnendu Mohanty, MAS chief fintech officer, said in an interview.

The nation is also promoting innovation in the rest of the region, according to Mohammad Raafi Hossain, founder and CEO of Singapore-based digital asset platform, Fasset. “We can anticipate Singapore’s status as a techno hub to nurture tech innovation of neighboring countries such as Indonesia, cultivating a stronger Southeast Asia crypto ecosystem,” he told Decrypt.

“Singapore has long been seen as a crypto-friendly country that values the innovation that cryptocurrencies can bring economically and socially, while staying alert to its potential risks,” he told Decrypt.

For Singapore, with its emphasis on fintech and innovation, enticing crypto projects to its patch has distinct advantages. An influx of crypto firms, coupled with the right regulations, presents an opportunity to capture some of the value in the digital asset market, not to mention becoming an innovation hub that’s the envy of Southeast Asia, and beyond—perhaps even a Silicon Valley for the 21st century.