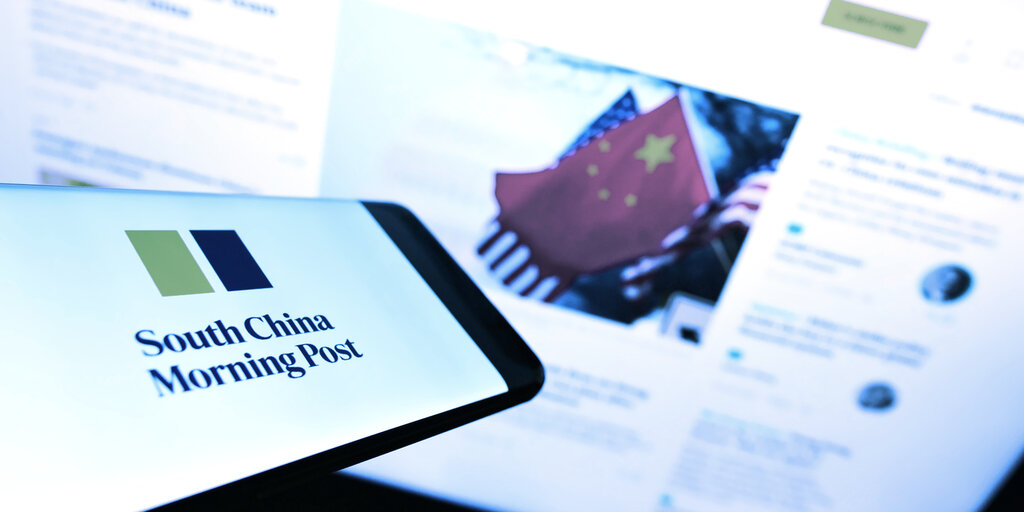 The Hong Kong-based newspaper South China Morning Post (SCMP) plans to venture into the blockchain space via two projects it revealed today. The first of them, called “Artifact,” is a new non-fungible token (NFT) standard designed to allow tokenizing of historic accounts and assets.

At the same time, SCMP has also partnered with The Sandbox, a blockchain-based virtual world developed by a subsidiary of Animoca Brands, to digitally recreate “Hong Kong’s history and iconic spaces through 118 years of journalism” via the platform’s NFT metaverse.

According to SCMP’s litepaper, its NFT project aims “to create a standard for recording accounts of history and historical assets on the blockchain, thereby ensuring immutability and decentralized ownership.”

In other words, the Artifact standard will allow for tokenization, verification, and trading of various historic assets—both digital and physical.

For example, an Artifact could represent a digital version of a certain newspaper cover or a photograph, as well as a large physical object such as a Linotype printing machine the likes of which can be found in one of SCMP’s offices. Interestingly, the newspaper noted that at some point in the past, it was the sole media entity in Asia that had such a device, and “the same model was used by SCMP when it was first established in 1903 until it was replaced in 1971.”

In addition to the NFTs themselves, the project also plans to introduce a standardized metadata structure that would provide collectors and other participants with “connectivity across historical assets, regardless of the medium, form, or issuer.”

What this means is that each NFT will have a set of various data associated with it. This information can include basic bits, such as the token’s name, description, and date of creation, as well as more specific data such as relevant people and entities, geographical locations, and rarity.

“Provenance and context are extremely important for historical assets; the richer the context, the more valuable the asset is to collectors. A shared and standardized metadata structure enriches the context of an NFT,” the developers explained.

Per the litepaper, collectors will be able to purchase Artifacts in several ways. For example, “Finds”—various bundles of randomly -elected NFTs that are related to certain themes—will “help collectors discover new knowledge, re-discover moments of personal connection, and may even surprise collectors with exceptionally rare and valuable historical assets.”

Meanwhile, some especially rare NFTs will be available through “Collection Challenges” as part of “exclusive drops to celebrate significant moments in history.” Naturally, users will also be able to trade their artifacts on secondary markets.

While SCMP has not yet revealed which blockchain it plans to build its project, the ultimate goal is to make artifacts blockchain-agnostic, meaning that the NFTs would be transferable across various networks, including “all major blockchains.”

Initially, only SCMP will be able to tap into its 118-year-long history of journalism to issue and authenticate artifacts. In the long term, however, the outlet plans to team up with a limited number of history-related institutions, and then open the project to a wider audience of issuers.

“In the long run, we will invite other institutions (including media publishers, museums, academic institutions, etc.) to adopt the Artifact standard for the creation of historical NFTs,” SCMP explained.

As the number of the project’s participants will grow, the process of authentication is planned to be delegated to a “council of globally reputable experts” that will govern a centralized vetting process.

SCMP is also considering launching a dedicated decentralized autonomous organization (DAO) that “will manage the authentication process” and ensure that “only verified issuers can mint Artifacts with the ‘authentic’ designation in the NFT’s metadata.”

Notably, SCMP is not the first Hong Kong-based media outlet that tapped blockchain to immortalize its history. Last month, Apple Daily, the pro-democracy news outlet recently shut down by the Hong Kong government, turned to decentralized technologies to preserve its content.

As part of its latest blockchain push, SCMP has also teamed up with blockchain game developer Animoca Brands to “create cultural experiences” on the virtual platform called The Sandbox, according to a press release shared with Decrypt today.

“The South China Morning Post is committed to engaging and educating a global audience with information and technology. The Sandbox allows us to create truly unique experiences based on SCMP‘s 118 years of journalism, and ensures that these historical accounts and Artifacts will remain immutable and available to the entire world,” said SCMP CEO Gary Liu in the announcement.

He added that thanks to this partnership, the platform’s users will be able “to experience the vibrant scenes of Hong Kong in the 1950s and learn about its complexities via SCMP’s contemporaneous reporting.”

The Sandbox is a shared Minecraft-like pixel world where players can buy digital real estate plots (called LANDs) and deploy their own interactive games. The first sales of LANDs started in January and have attracted numerous prominent buyers since then.

For example, crypto exchange Gemini and its NFT marketplace Nifty Gateway, alongside their billionaire founders Tyler and Cameron Winklevoss, are among the most notable LAND owners today. Galaxy Interactive, the gaming-focused arm of Mike Novogratz’s Galaxy Digital, and investors Bill Lee, Ken Howery, Sundeep Madra, and many others have also nabbed their own pieces of the virtual world.

For example, SCMP plans to recreate landmarks such as the famous Kowloon Walled City and the Star Ferry in a so-called “Mirrored World” where both Hong Kong’s past and present are intertwined.

“The Sandbox welcomes this partnership with the South China Morning Post as an important milestone in our quest to incorporate diverse cultures and histories in our gaming metaverse,” added Sebastien Borget, COO and co-Founder of The Sandbox. “We are keen to see how [SCMP] will leverage The Sandbox platform to offer exciting and interesting cultural content to our entire global community.”

On this occasion, The Sandbox will also hold a new sale on July 22, offering users to buy LAND plots near SCMP’s project. Each purchased LAND will include “exclusive premium NFTs and have the possibility to host events, gaming experiences, or social hubs when the game is released later in 2021.”