More than a decade since the birth of the smart contract the advent and development of blockchain technology have made it applicable and more efficient in realistic uses. Now Edgeware is taking smart contract technology to the next level.

ETH laid the basic foundations for the establishment of smart contracts on the Blockchain. The smart contract became popular with ETH has given people globally the ability to create complex smart contracts to handle a variety of applications.

Smart contract projects and tokens within the Polkadot system are of great interest to crypto enthusiasts. Edgeware (EDG) is one of the most promising new projects to hit the markets in a long time, and it is leveraging some of the most powerful new technology to make an impact on the crypto markets.

The core technology behind the blockchain is a combination of Proof-of-Stake consensus protocol, on-chain identity, governance interface, and various outstanding technologies.

Polkadot is known as a network of chains (parachains) with the ability to expand and interoperability characteristics.

Each group of parachains takes control over financial, resource aspects. Edgeware will offer the most efficient and simplest way to deploy smart contracts within the Polkadot system.

The project aims to drive more adoption in the community, with 90% of Edgeware’s tokens being issued to all crypto investors through the method of “Lockdrop”. It is understandable that this method is to stake ETH to create EDG coins. 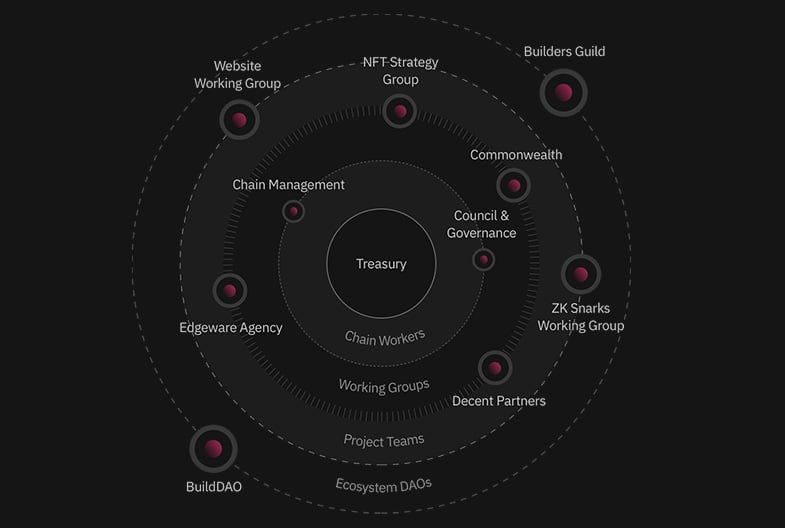 A New Way to Create Connections

As a premier project that has been built and developed on the Polkadot network, Edgeware provides a leveraged infrastructure with the goal of supporting other Blockchain systems to operate in the most efficient and secure environment, creating the basis for these systems to exchange information easily and securely.

The project also creates a space for coders to build DApps, protocols and DAOs on the Edgeware platform.

While users participating in Lockdrop will have a say in the future of the network, their decisions will affect network upgrades. In return users will receive rewards from contributions in the network.

The project does not limit its ability and capability in building a user-friendly smart contract blockchain.

Apart from creating a new crypto ecosystem, the focus is also on bringing a range of benefits to participants. That said, those interested can participate and contribute without leaked identity concerns, whether they use their real names or choose to stay anonymous on the platform.

Edgeware network functions based on the two key components: Coder and User.

Coder: Coder can be understood as the core element to build and operate the DAppS (in other words, the role is similar to developers). With Coder, Edgeware can improve the operating conditions while in return, coders have a better space to grow.

User: User is the core component that determines the development of the system during its operation. Users are those who will vote, authorize, and subsidize technology upgrades used in the system through the DAO, while the system will vote cryptographically and economically.

Users participating in the Lockdrop will have certain roles and benefits, represented by the governance mechanisms and token distribution, which serves the improvement of the system. Their contributions will give them the opportunities to gain rewards from the system.

A Range of Features

Edgeware’s smart contract is integrated in many different languages ​​such as C, C++ compiler, Rush, and Wasm.

What makes Edgeware stand out is that their smart contract deploying interface supports tables linked to other strings to make it easier for developers to code.

The protocol is also focused on addressing the common issues within the consensus systems, for example, the nothing-at-stake problem.

Edgeware applies the GRANDPA Proof-of-stake protocol to optimize the system. Users in the network have full rights to vote, delegate, and fund each other to upgrade the network.

Beyond that, there are a couple of major highlights, including:

Edgeware was the fastest and the most convenient bridge for other projects to deploy on Polkadot since Polkadot came into operation.

Substrate provides a Blockchain infrastructure with the essential building blocks needed to grow. That allows Edgeware to implement smart contracts, DeFi applications, and administrative network elements in the system.

Edgeware uses the Nominated Proof of Stake (NPoS) protocol to optimize the system. Every user is empowered to participate in voting, delegate responsibility, and fund each other.

EDG is the official token of the Edgeware infrastructure platform. EDG was launched in the form of Lookdrop. Edgeware launched mainnet in February 2019.

With an initial supply of 5 billion tokens, EDG is distributed by the development team into five parts with the following ratio:

With the mentioned token allocation, it’s easy to find out there will be no ICO funding round. However, Commonwealth Labs successfully raised $2 million from a confirmation.

Here are the details of token release schedule:

What is Edgeware (EDG) Used For?

EDG is the token that empowers the Edgeware framework, its uses therefore vary. Here are some of the ways that EDG is used.

With EDG, users have the right to vote for future changes or improvements within the system as well as for participating in managing project activities.

EDG holders who participate in staking EDG through confirmed transactions on the network can earn rewards from the project. According to the team, the current reward is 158 EDG/block.

Similar to other tokens, EDG will also act as a means of payment in the coming applications like DApps, DAOs, and many more.

Edgeware is still in the early stages of its development, the future of Edgeware Coins (EDG) is promising when Polkadot operates.

Edgeware will likely be the bridge to provide infrastructure for projects operating on Polkadot.

As a means of payment in the infrastructure, this leads to a sharp increase in demand for EDG. To learn more about Edgeware, please click here!

The post Edgeware: The Future of Blockchain Community Building appeared first on Blockonomi.

6 thoughts on “Edgeware: The Future of Blockchain Community Building”