Finance and risk author Nassim Nicholas Taleb came out swinging against BTC in his keynote presentation on Day 3 of the CoinGeek Zurich conference. He also compared some cryptocurrency communities and their “HODL” mentality to neo-pagan religions, and gave some historical context to a few well-trodden BTC narratives.

No one was really expecting Taleb (or Nouriel Roubini) to start making strident arguments in favor of BSV as a better implementation of Satoshi Nakamoto’s vision than BTC. However, his main points were against BTC as a store of value or inflation hedge—something most of the audience likely already agreed with.

Agreeing with previous speaker Nouriel Roubini while reminding everyone his sentiments tend to the libertarian side, Taleb said he doesn’t really like governments to own/control the currencies we use. But he reminded listeners of a few key points: a currency should never be a speculative investment; a store of value must have arbitrage bounds; and transactional flexibility does not require complete decentralization.

He did correct Roubini on one point, though: BTC is not useful for criminal use. “Everything electronic is traceable,” he noted.

Taleb looked at BTC as an inflation hedge compared to gold. The “digital gold” meme is popular in BTC circles, but doesn’t get much play in BSV. Gold itself has been de-monetized and there’s not enough of it to keep up with demand to use as money, he added. This has made even that asset too volatile to really protect against inflation. “I want to convince libertarians that BTC is not the thing they should rally for,” he said, giving a formula for what a true inflation hedge should be. He told the story of Italian students hoarding payphone tokens as a hedge against the inflating lira as one example as a hedge that worked only temporarily. In a similar vein, the familiar BTC trope of Jesus chasing the money-changers from the temple failed to look at why the money-changers were there (the temple accepted only the Shekel of Tyre, a stable currency at the time). In more modern times, people used the Swiss franc as a stable hedge. What people really want is something stable, and BTC isn’t that.

One thing about BTC that “really turned me off, and started this whole process” (towards BTC skepticism) was looking at BTC’s price volatility versus capitalization statistics, Taleb said. There’s no way it could be a usable form of money with those kinds of numbers.

But what about BTC functioning as a kind of backup to the current fiat system, should it fail somehow?

“A person said to me, ‘If the world goes to hell, I can always use BTC.’ Well, I’m in the risk business.”

There was no guarantee you’d even be able to use BTC in a real crisis, he said, and the past year has had enough examples of crises to demonstrate how things can veer off course quickly. 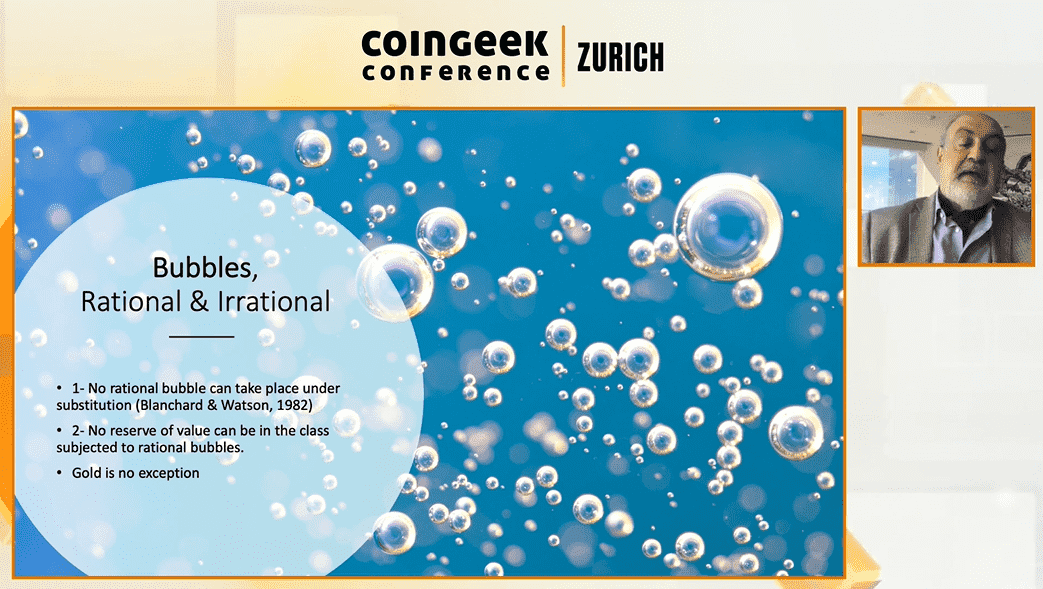 At a conference where the focus has been on “igniting the power of data” with near-zero content on BSV’s unit value, Roubini’s and Taleb’s criticisms of BTC as a currency or inflation hedge felt a little obvious. Both might have been surprised to discover the audience actually agreeing with their points.

Both speakers further elaborated on their opinions, and faced some more confrontational comments from Dr. Craig S. Wright and Ian Grigg, in a following panel. It was apparent neither Roubini nor Taleb had studied BSV in much detail as yet—whether they will do that in future remains to be seen. But the BSV audience has also grown weary of the decade-old “digital gold” meme that never delivered (and was never really true), and are now looking to wider applications for the technology to fulfill Satoshi’s vision.