Ethereum developers successfully implemented The Merge update early Wednesday afternoon. This will be the main test before the long-awaited release of the update to the mainnet.

Ethereum’s main testnet, Ropsten, has received the update for testing. Then the Goerli and Sepolia networks will also undergo a migration. If all goes well, The Merge will hit the mainnet by August of this year.

However, the network began to lose some blocks, something that, according to Beiko, was foreseen. Now, developers will continue to monitor the network for faults.

One of the most anticipated events on the Ethereum network, the launch on Ropsten was broadcast live. Names like developer Tim Beiko and Vitalik Buterin participated in the launch live and answered questions live.

The most anticipated release was the ETH mining algorithm change. In this regard, the update successfully implemented Proof of Stake (PoS) at Ropsten. As a result, blocks began to be mined using the new algorithm. 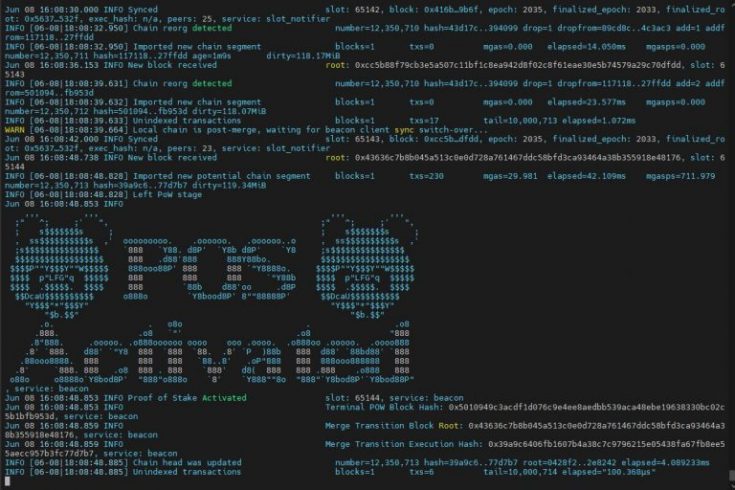 Moment of implementation of the PoS algorithm on ETH. Source: presentation.

The successful implementation of PoS on Ethereum is critical as it will determine the fate of the upgrade. In this way, the migration to the main network should happen without mishap.

However, Vitalik Buterin stated that the network must be constantly monitored. Therefore, users must wait at least for the daily closing of blocks. That is, the pass rate or loss of blocks in the last 24 hours.

“Fusion running well for 6 hours is not evidence of complete success,” said Buterin.

At the time of writing, the Ethereum network has a 96% block approval rate. If the testnet gives a similar result, that’s a great sign.

During the testing phase, Merge will undergo extensive evaluation in order to assess certain targets. Among them is the famous “difficulty bomb”, the mechanism that will end Proof of Work (PoW) mining in ETH.

As a test network, Ropsten has a low processing power (hash rate). To prevent a hacker from eventually launching an attack against the network, the algorithm set a high difficulty level – 50 quadrillion hashes.

In short, the high difficulty level should prevent a malicious entity from interfering with tests.

This actually happened last time and the developers had to postpone testing. Now users will have to configure their nodes to bypass the full difficulty. This should happen by the end of this Tuesday.

As for lost blocks, Ropsten reached a 30% loss in mined blocks. Although Beiko warned that losses were to be expected, the high rate surprised developers, who are looking into the issue. In the meantime, no further announcements will be made.

NFT overview: Building in New York is advertised as NFT for 15000 ETH