BTC is considered by laypeople to be an absolute climate killer. Thousands of special computers all over the world have to solve calculations every second to keep the decentralized system alive. This process, known as mining, is based on the so-called proof-of-work algorithm – and now consumes as much electricity as small nations such as Finland or Switzerland. The EU therefore wanted to legally ban BTC mining in 2022. China took the step last year, leading to a mass exodus of BTC miners from the People’s Republic. How justified is the image as a climate sinner at all?

The European Wealth Manager CoinShares directs in a January 2022 study look at another and much more important factor: the actual CO₂ emissions. They say far more about the real environmental impact than the pure power consumption. And according to the report, BTC comes off much better than many other long-established industries. The global banking system, the gold industry, data centers, air traffic and shipping – compared to BTC, they are the significantly larger CO₂ emitters. 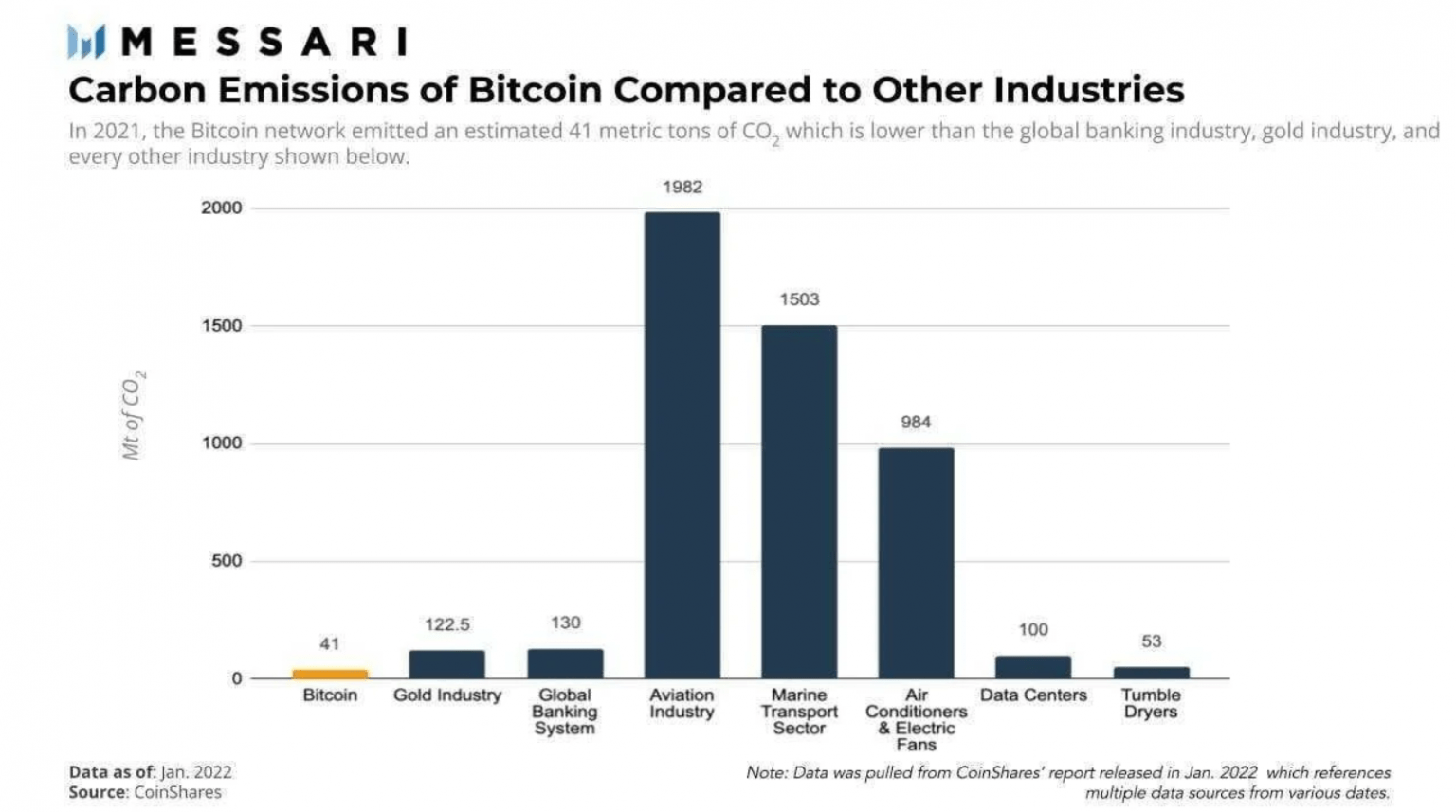 According to Coinshares, it has compiled comprehensive data sets from various sources into one model, the most complete report to date. Their result: 42 million tons of CO₂ emissions per year, many times less than comparable industries. There are other numbers too: A study by forex estimates the CO₂ emissions at 57 and Digiconomist even comes to 65 million tons. That is still a lot less than banks, gold and co.

The problem with the numbers

The results of these calculations depend on the available data sets for mining. Where is it mined, how much and from which energy sources? And there – also in the Coinshares report – there are still large gaps that are closed by estimates. Hence the large range. It is also important to note which factors are included in the calculation at all. While Coinshares estimates a power consumption of 89 terawatts per hour with its model, a study from Cambridge speaks of 299 terawatts per hour. In addition, one has to say: The investment company itself earns money from the sale of ETPs (Exchange Traded Products) for BTC, so it is not independent in this matter.

Central to the debate on how harmful BTC mining really is to the climate remains the question: What sources does the energy for the network come from? Miners often settle in certain regions, build large hardware farms there. These can be classified very differently in terms of their CO₂ balance.

Kazakhstan, the US states of Montana and Kentucky, and the Canadian province of Alberta, for example, provide 26 percent of all energy for the network but are responsible for 43 percent of carbon emissions, according to the report. These miners mainly focus on coal, gas and oil. Other regions, such as Sweden and the Canadian provinces of Quebec, Manitoba and, more recently, Texas, cause only low emissions with comparatively high benefits for the network. According to Digiconomist, the trend is unfortunately negative: It is estimated that the share of renewable energy in BTC mining has fallen in the last year, from a total of 43 to 25 percent. The reason for this is the ban on mining in China, where there was a particularly large amount of environmentally friendly mining.

More than 200 companies and individuals from the industry took part in the last year Crypto Climate Accord teamed up. In this climate agreement, they commit to net-zero emissions from crypto mining by 2030, primarily by switching to renewable energy sources.