The consultation demonstrates that regulators are taking the market seriously and preparing the banking industry for widespread adoption. BTC jumped roughly $2,000 dollars with the publishing of the paper earlier this morning.

Although not quite as strong a performance as last week, gold seems to have recovered from the dip it took towards the end of last week. After surpassing $1,900 on June 2, gold’s price took a dive on June 3, sinking down to $1,860 by June 4. However, later that day it recovered somewhat, spiking back up to $1,890.

After dribbling down a bit, it had again reached $1,900 by June 8. Despite a small spike or two, gold’s price trickled down over the next two days to $1,880.  But around midday the price spiked, pushing it to $1,890 where it is currently trading.

The reversal came after data showed U.S. consumer prices increased more than expected last month. “The key takeaway is that this market is firmly believing that the US Federal Reserve is not going to change stance anytime soon and the playbook for gold remains,” said Edward Moya, senior market analyst at OANDA.

Although some pricing pressures remain for gold, ultimately the belief that “runaway” inflation, which could trigger a Fed policy tightening, is unlikely which should keep gold supported, Moya said.

Riot Blockchain has had a solid month of June so far. After starting the month around $27, the stock pushed up to $30 the next few days, before trickling back down going into the weekend. On June 7, RIOT traded at $29 basically all day.

But on June 8, the stock gapped down, reaching below $26. From there it bounced back, reaching a high of over $32 on June 9. It is currently trading around $30.

RIOT’s recovery on Tuesday is due to a recent development. According to a filing with the Securities and Exchange Commission (SEC) this week, Riot Blockchain is selling 2.2 million shares of Coinsquare to Mogo (NASDAQ:MOGO) in exchange for 2.3 million shares of Mogo.

Mogo is a fintech company, while Coinsquare is a cryptocurrency exchange based in Canada. Although the deal had been announced previously, the latest SEC filing disclosed that the first payment of Mogo stock went through on June 4.

Clean Energy Fuels has also had a good June so far. Starting the month around $8, the CLNE jumped up to $9.50 by June 3. The next two trading days saw it gap up even further before trickling back down, achieving $10.50 on June 7. However, the stock really made a move gapping up significantly on June 9 to over $12, it proceeded to have a rather volatile day. It is currently trading around $11.50. 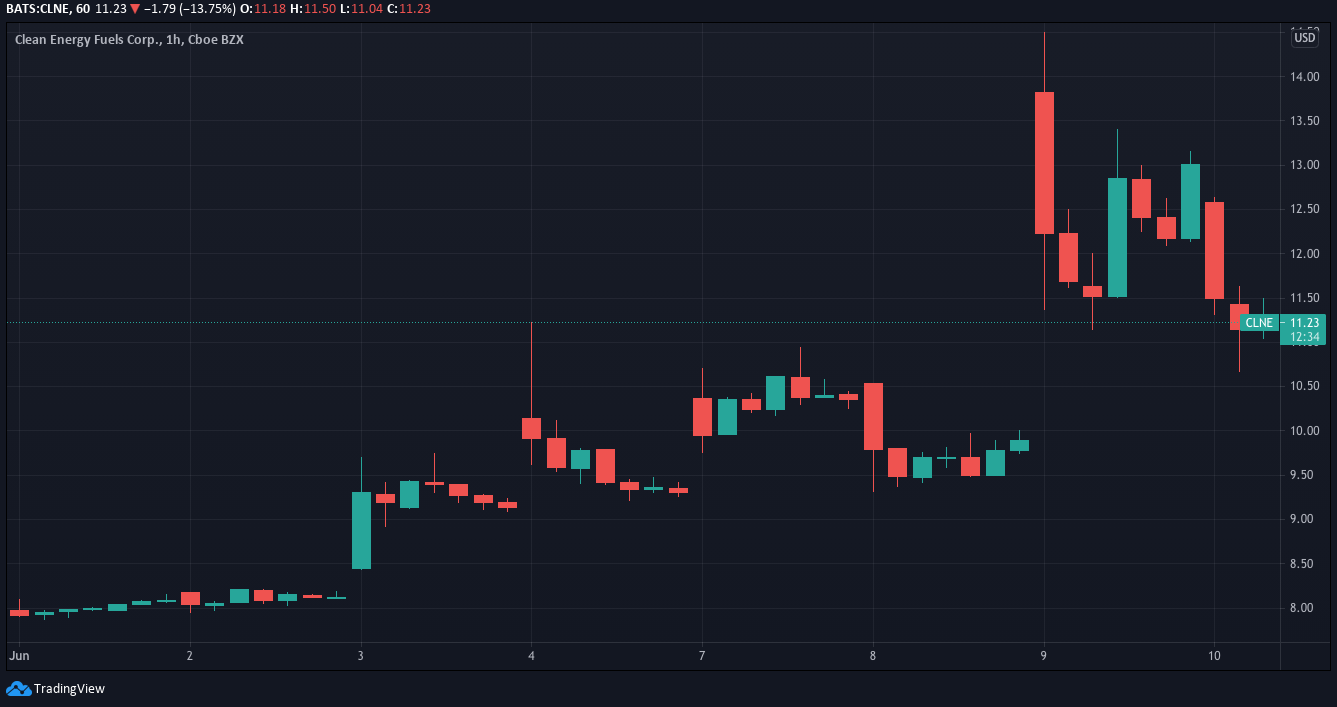 Clean Energy Fuels, which collects and transports natural gas produced by animal waste collected at dairy farms, is the latest to receive the “meme” stock treatment. Clean Energy soared 37% on June 9 as the meme trade gathered momentum, and boisterous Reddit posters celebrated. “Can you smell the cow poop and the Benjamins this morning?” asked one meme. CLNE had already risen 22% over the prior week.

The company does not appear to have released any major news that would explain the stock move, but similarly to other meme stocks, Clean Energy’s move appears to be driven by an attempted short squeeze.