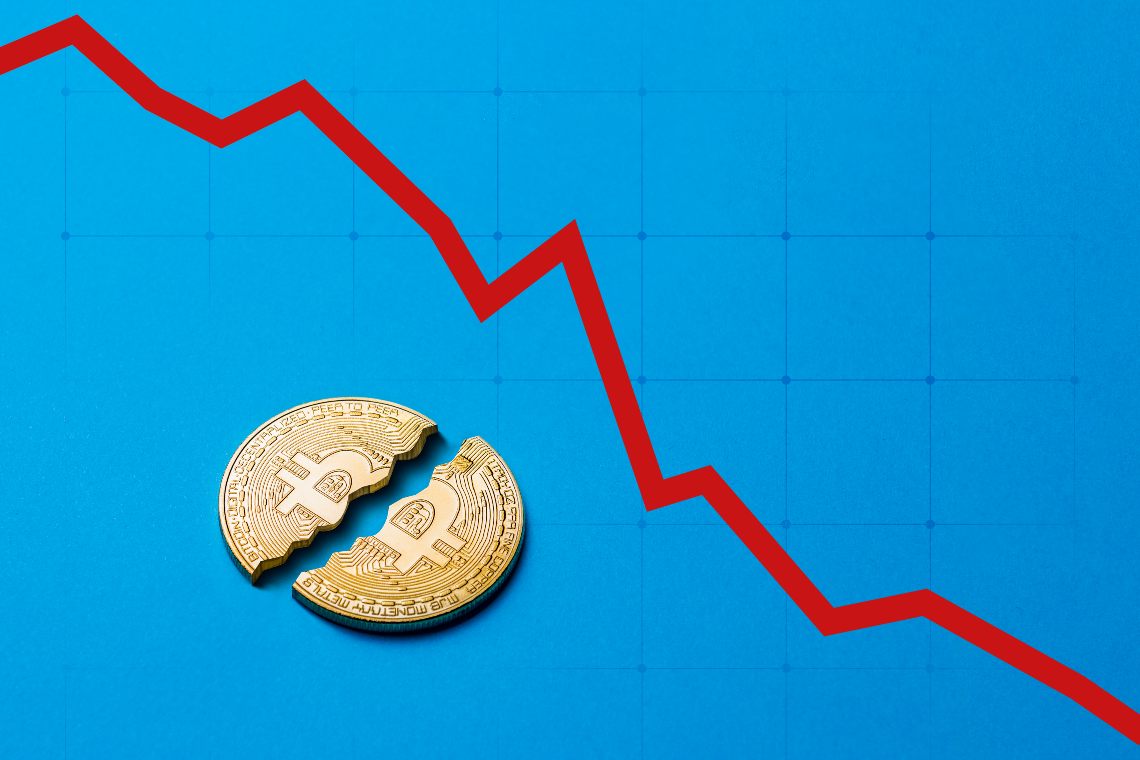 The day begins with a drop in prices for cryptocurrencies, a sharp inversion of direction. In a few hours, the climb that had left us breathless for the last ten days was swept away. A race that, as repeatedly indicated in these pages, was not leaving behind solid foundations necessary to resist any reversals.

For this reason, the movement in progress should not surprise the more experienced users since the warnings shared several times here were motivated by a rise that in the last part began to show characteristics of an irrational euphoria.

In a few hours, the trading volumes exceeded the total of those exchanged in the whole day yesterday. A day that, in spite of the peak of the prices, did not confirm the trend of the three previous days with exchanges under the average. It was a clue that was supposed to alarm about a dangerous drop in strength that usually does not confirm the continuation of the trend. The signal is materializing in these hours.

Cryptocurrencies drop, a bloodbath also for Bitcoin, Ethereum and Ripple

Scrolling through the list of the first 100 cryptocurrencies with the highest capitalization, only one green sign stands out, that of CyberVein (CVT), in sharp contrast to the trend, it shows a 5% increase from yesterday’s levels. The CVT utility token offers access to decentralized big data and payment services in the cloud.

Everything else is a bloodbath with more than 80% recording double-digit losses, including Bitcoin and Ethereum, both down more than 12% from yesterday’s levels.

The drop of Ripple (XRP) is even deeper, with 25% is among the worst, along with Verge (XVG) and Reserve Rights (RSR) dropping more than 30% in value in the last 24 hours.

The decline of the last 24 hours is reflected in the capitalization that drops more than $65 billion, bringing the total back under $500 billion.  To find a movement with such intensity in such a short time it is necessary to go back to the first months of 2018, at the beginning of the bearish phase that characterized the rest of the year. As often happens in ferocious bearish phases, the dominance of Bitcoin dates back to above 62%, to the detriment of Ethereum (11.3%) and Ripple XRP (4.4%), the lowest levels of the last week. 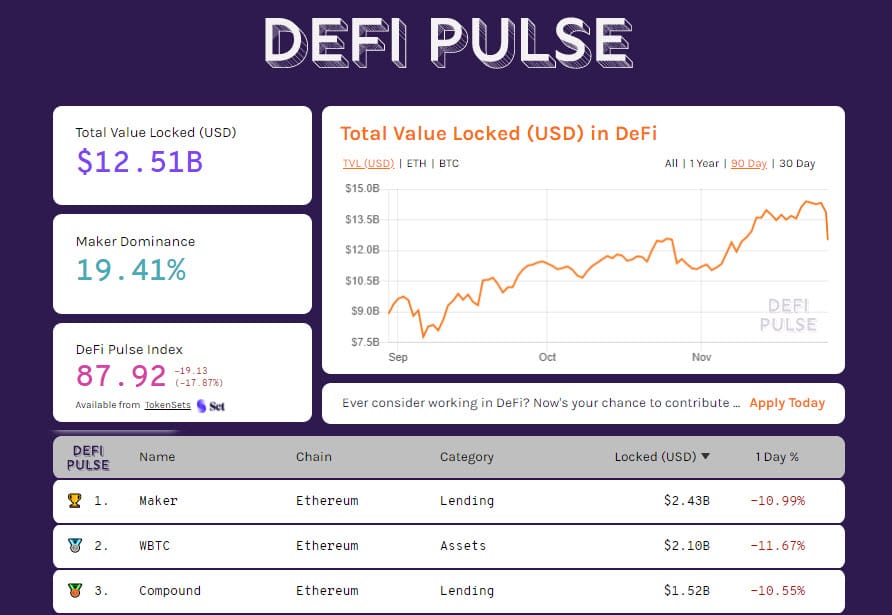 The total value locked as collateral in the decentralized finance protocols evaporates by about $2 billion, from $14.3 to $12.5 calculated in US dollars. The main reason for this is the loss of more than $140 for Ethereum, the main cryptocurrency used as collateral, which was already showing an outflow from DeFi projects in recent days.

The descent of these hours, and still in progress, records a 15% drop from yesterday’s highs at 19,497 dollars, the highest peak since December 17th. It is a movement that extends beyond the average of the only two previous downward movements recorded in the last month during one of the most intense bullish phases of the last three years, as highlighted in yesterday’s update. It stops just a few dollars above the bullish trendline that combines the recent bullish lows. This has filled the margin of downward movement highlighted yesterday, where the danger of speculation could hit.

From now on it will be necessary to start identifying the beginning of a consolidation level required to create a good base from which to start again. If in the short term the current downturn is to be classified as the worst since the beginning of September, in the medium term the downturn still finds room to fall. Only an extension of the collapse under area 14,500-15,000 would start to give a medium-long term reversal signal.

The intense drop of these hours extends the decline from the highs of Tuesday, November 24th by more than 20%. A loss of more than 140 dollars stops at one step from the 480 dollars, a level highlighted in yesterday morning’s update hypothesising a downward reversal, which has materialized in these hours.

Now it becomes important in the short term to defend these levels to consolidate the resilience of the former resistance, which has now become technical support. In the medium-long term, it is important not to go below $465-430, where the trendline that accompanies the rise and combines the higher lows since last March passes.

The post Cryptocurrencies drop: BTC and ETH -12% appeared first on The Cryptonomist.