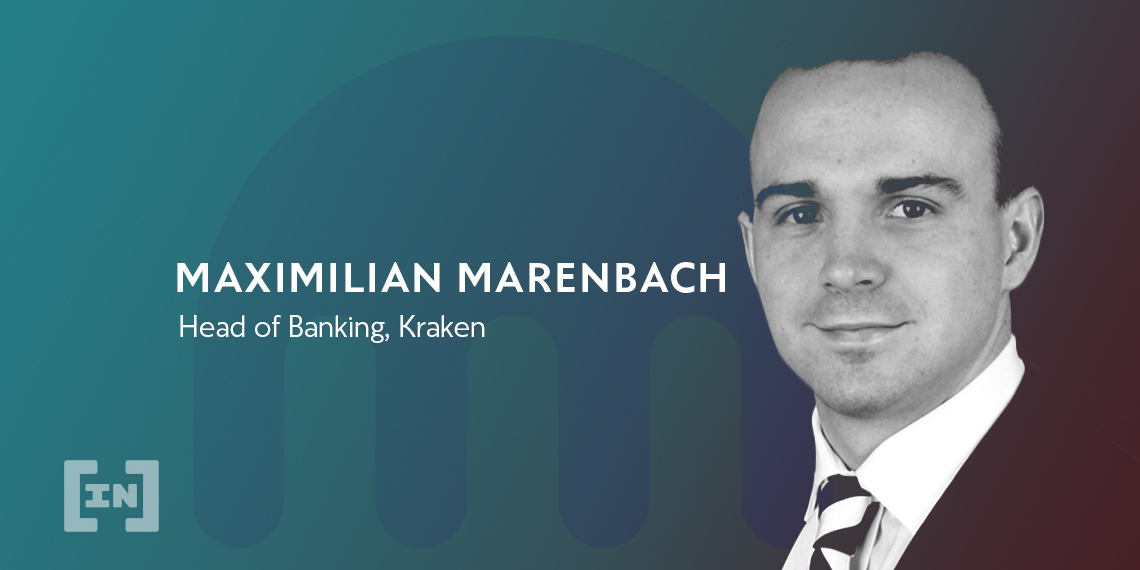 BeinCrypto spoke to Maximilian Marenbach from Kraken about BTC as a store of value, IEOs and the future for cryptocurrencies.

Kraken is one of the largest cryptocurrency exchanges in the world. It has a 24-hour trading volume of $907.26 million at the time of writing. As such it has been front and center for much of the changes that have happened during this time. One of its main goals is to speed up crypto adoption.

Marenbach is currently Head of Partnerships and Business Development for Europe at the exchange. He also works as a freelance blockchain consultant on the side and is an ICO consultant.

“This can be a revolution”

Much like Kraken, Marenbach is not new to cryptocurrency.

“I started out getting into crypto around six years ago, plus-minus a little, a little bit longer six, nine years. I got introduced to it by a then colleague of mine,” he explains.

“Then I started to doing a little bit more research about it and what it actually is that I just invested my money in. I began to understand more the philosophy. The idea of decentralization, the idea of giving power back to the people and why the hell is only a government allowed to issue legal tenders for exchange of goods and services.”

“Now, why would they? Why not the two of us that get certain tenders? And this idea really struck me, having worked in the banking sector before, having seen how many people got absolutely shredded in the financial crisis,” he says.

“Having seen how many people lost their fortune, lost their livelihood because of, the greed of financial institution really stuck with me. I really saw that this can be a change. This can be a revolution. I call it the monetary revolution so to say. This is then when I began when I got more involved in the space.”

As a veteran of the cryptocurrency scene, Marenbach is no stranger to the volatility and cycles surrounding the original crypto, BTC.

However, the high volatility of BTC does not make it easy for all investors to trust its potential function as a store of value. As such, its value as a safe haven is often undermined. For Marenbach, this volatility shouldn’t bring doubt to the coin.

“If you look at the price history of BTC over the past three or more years and compare it to other asset classes, I would still see BTC and other crypto assets as a safe haven. However, it is also no secret that the BTC price shows a certain degree of volatility, which has, however, decreased significantly in recent years. “

He explains that, especially in times of economic and social uncertainty, more people will be turning to BTC. In addition, he sees the current market developments as a normal maturity phase that every new industry goes through.

Building trust and security in crypto

While Marenbach may believe that BTC is still maturing, rather than failing, he is not as encouraging of all tokens.

This is especially true when it comes to Initial Exchange Offerings (IEOs), which are not offered by Kraken. The trading platform bucks the trend, as multiple other exchanges hype these offerings.

“Kraken Cryptocurrency Exchange has strict screening criteria for the tokens we have listed. The main criterion for listing new tokens is to support projects that are in line with our company’s main mission: Accelerate the adoption of cryptocurrency so that the world can achieve financial freedom and inclusion. We make sure that every token goes through compliance, legal and security checks. The security of the exchange and the security of our customers are our top priorities and determine everything we do.”

“Kraken has always been ranked as very secure and very trustworthy avenue. This was very important in building our brand and building our reputation and actually promoting the whole ecosystem, the whole revolution and the whole movement behind it,” he explains.

Part of this is also about caterign for everyone. Not just those with a lot of money to put into the exchange. For Marenbach, while investment and spending trends can be mapped across regions, each individual is ulitamtely unique.

“Everyone has their own goals, and this is key for Kraken, to make sure that we cater to all the different user types and that’d be not just service one because in order to really foster global monetary change, you need to be able to service everyone because we’re all part of it.”

For Marenbach personally, it’s not just about what crypto runs high or when the next bull run comes for BTC. He is also interested in the tools being built on this same technology.

“I’m a huge proponent of DeFi space just because it gives investors or users or whatever you want to call it, a million alternatives to the existing crusted financial system which has failed people.”

“I mean, we created things in a financial system for a very good reason and if you look at it now, it definitely has failed us as a society in general. Which has benefited a very small portion, maybe largely, but the huge majority of people are feeling kind of betrayed. So I see that the DeFi space can really help kind of allow them ease their pain and make sure that people have an alternative to the old school centralized financial system,” he explains.

For Marenbach, crypto is still in its early days. He sees the community is growing and challenges are continuing to pop up. However, he considers this only the beginning when it comes to the future ahead.

“Again at the beginning, I didn’t have a lot of experience. It took me quite some time to get to understand it. The philosophy, of course, but also of the technology behind it, especially,” he says.

“I feel like there’s just 0.01% done here, right? It’s just so much more to come, so much more to do, so many more challenges to face, and I’m just super excited to be a small part it.”

The post ‘I Call It the Monetary Revolution,’ Says Kraken’s Maximilian Marenbach appeared first on BeInCrypto.