Polkadot (DOT) has set a date the debut of the parachain auctions on November 11 after unanimous approval by the members of the blockchain chain management board. These reports represent a significant success.

Parachains are unique Layer 1 blockchain platforms that act laterally along the core network and are additionally attached to the Polkadot Relay Chain. Their function can be seen in many areas, from decentralized finance to smart contracts.

The first Polkadot parachain auction is scheduled to begin on November 11. It will then continue at a rate of one week for five consecutive weeks until the final auction on 9 December.

The initial bidding period will be two days, followed by a five-day period. Unlike the immediate start of the Kusama project after the auctions, the Polkadot auctions will take place over a period of one month.

Kusama is a sandbox platform designed for developers to experiment with blockchain applications before they are officially launched on blockchin Polkadot. It has recently successfully completed 11 parachain auctions.

The polkadot rose sharply on the token price

DOT after closing the growing wedge and retracement 50% created a sharp break. In the short term, the price was overheated and stopped rising. The nearest support is in the zone around $ 37.00, but the price may bounce back sooner. Bull targets are at $ 44.50 and $ 49.00. RSI indicated an overbought phase and we are, probably, at a short-term high. 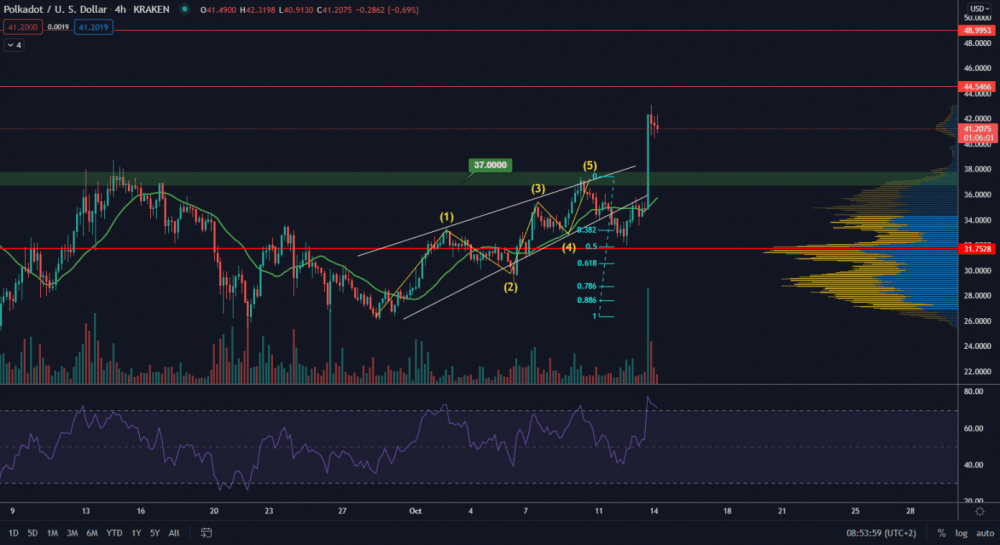