While the majority of the crypto market is recovering from the recent setback, Solana is once again booming with a fireworks display.

After the stormy swell in the crypto ocean, the market situation seems to be gradually calming down. BTC, for example, was able to stop its downward trend for the time being after the digital store of value had previously suffered losses of up to 15 percent. At the time of going to press, the crypto currency is trading gossamerly up at $ 46,258.

A somewhat more positive picture emerges in the altcoin sector. The ten most valuable cryptocurrencies in terms of market capitalization all recorded gains of between 3.8 and 8.37 percent. The absolute winner of the day goes by the name of Solana. Once again, it must be said. Because the course of the self-proclaimed ETH competitor has had an impressive rally since the crash. In the past 24 hours, the SOL course has increased by a full 30 percent. A few hours ago, the high-speed blockchain project even hit a new all-time high at $ 214.96. At press time, Solana is trading at $ 208.30. 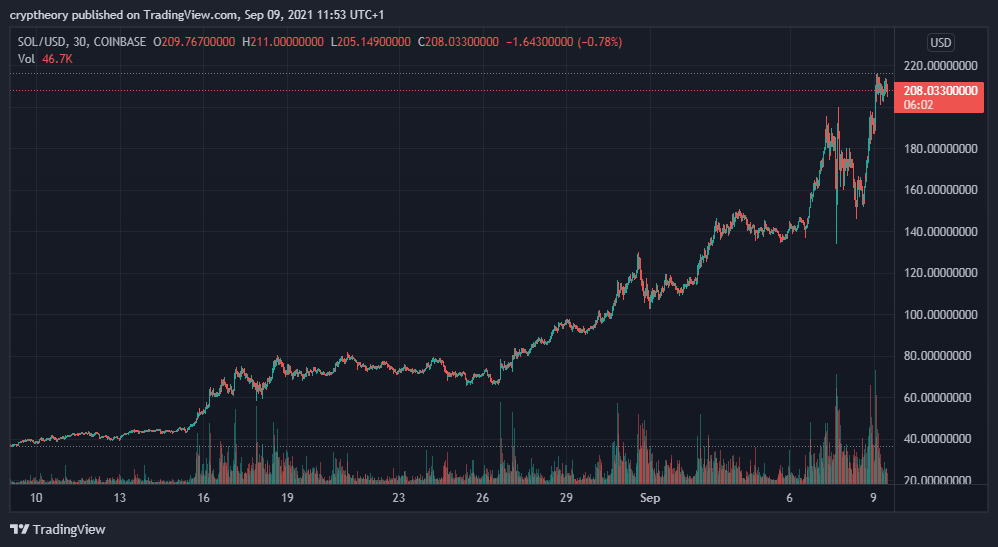 The upward journey from Solana has been going on for over a month. While the SOL price was just under 40 US dollars at the beginning of August, the value of the cryptocurrency has risen by 435 percent since then. With the continuous increase, the ETH competitor gradually managed to move up more and more in the top 10 ranking. With the latest outbreak, Solana has now displaced the “bank coin” Ripple from sixth place. There is now a nearly $ 10 billion discrepancy between SOL and XRP’s market capitalization. Incidentally, there is a similar lead over positions five and four. For this, however, another course fireworks of the same extent would be necessary.

The basis for the ongoing price increases of the ETH competitor are based on a series of events that repeatedly caused new outbreaks. For example, Solana grew by 40 percent in mid-August when the NFT project of the “Degenerate Apes Academy” was launched. It was a digital map collection, similar to the CryptoKitties, which users could create themselves for a fee of 6 SOL. Apart from that, the DeFi ecosystem in the Solana network has boomed in the past few weeks and has enjoyed increasing investment interest. The headlines were made by the US $ 70 million funding from the Solana-based DeFi exchange “MangoMarkets”.

In addition, there is now more news. Because like the US medium The block reported, supposed to be the staking protocol Lido Finance have given its users the opportunity to stake Solana in addition to ETH and Terra. For the inclusion of their SOL, users receive a synthetic equivalent in the form of “stSol”, which can then be used for further return options within the decentralized finance.