The giant and the Tether dispensing machine have not released a single USDT on the Ethereum network in the last 50 days, as more stabilecoins are gaining in popularity.

USDT emissions on the Ethereum network are cooling down

According to recent data, the USDT was last created on Ethereum on May 31, which is the longest period in history when an asset was not released on the network. The total ERC20 USDT is now $ 28.9 billion. 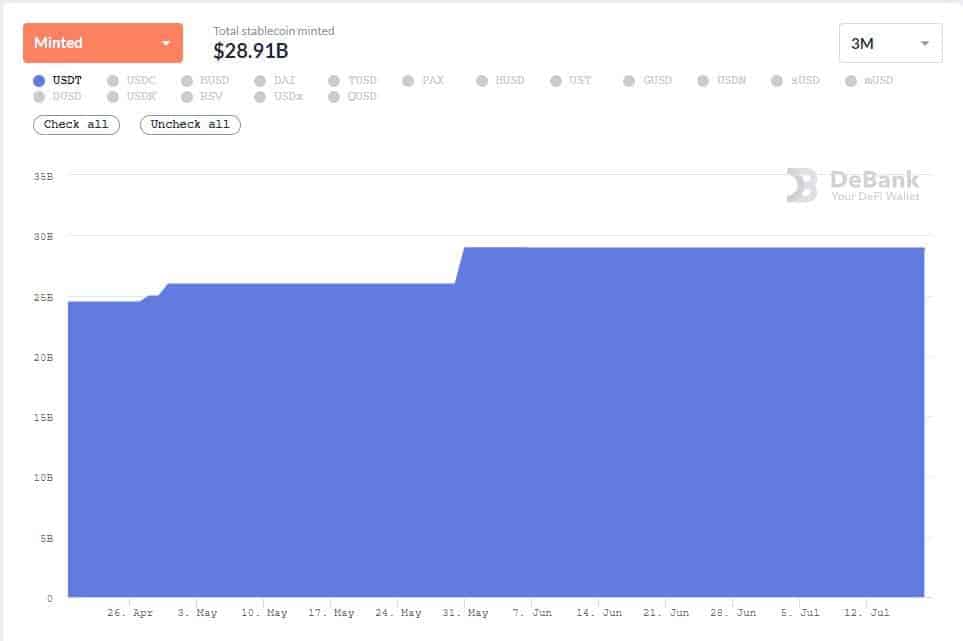 One of the main reasons for the sudden cessation of the release of new USDTs on the Ethereum network may be low demand due to the high fees that users pay when interacting with smart contracts. The leading stablecoin is released on several blockchains including Omni and Binance Smart Chain, Tron.

In April, Tron dethroned ETH as the dominant chain for the USDT. At the time of writing, more than $ 31.9 billion of the 62.3 billion coins in circulation had been generated on Justin Sun’s blockchain.

While the USDT is losing ground in the ETH ecosystem, other stablecoins are growing tremendously. For example, the USD Coin (USDC) has been gaining traction since the beginning of the year, despite high plots. The data show that the USDC saw an increase of more than 1,800% in 2021 alone, with coin supply rising from 1.3 billion to 25.7 billion over the past seven months. That’s only 3 billion of the amount of USDT on Ether.

Analysts believe that the total amount of ERC20 USDC will sooner or later probably exceed the amount of USDT. A Messari report in late June revealed that the USDC was attracting a lot of interest, especially from DeFi users, and growing demand could put it in the position of Ethchum blockchain leader.

The report further suggests that Tether’s dominance in stablecoins on Ethereum is likely to fall below 50% over time, which will increase the USDC’s chances of taking dominance.

Although USDT is on the verge of losing its position as the largest stablecoin on Ethereo after seven years, Tether’s Chief Technology Officer (TTO) Paolo Ardoino believes the competition is healthy for the industry.

In a series of tweets yesterday, Ardoino noted that he is confused whenever he reads reports that “competitors are taking the market capitalization of Tether.”

“Everyone takes from the king, not from the smallest – Competition and diversification are the key to success in any industry.”

The idea they created in 2014 turned into a competitive market. According to him, a larger proportion of stablecoins facilitates the achievement of fairer regulations.

“More voices will be heard. This is what will make the stablecoin sector much stronger in the long run. We don’t mind seeing growth. We welcome everyone. All we care about is that the game is fair and equal. “